Fun in a Fiat

Heads turn when Neil Dixon drives by in his Fiat 500, especially if he has the trailer attached. It’s as if half a car is following a whole which is, in fact, what’s happening.

After restoring the baby blue Bambina a few years ago, Neil saw photos of a trailer made from the back half of a car. He loved the concept, so decided to build one himself. Late last year, he and his wife Kaye drove the result from their home in Tauranga to the Te Aroha car show. It was a triumphant journey and a poignant one, as the two restoration projects were funded with an inheritance from Neil’s parents. 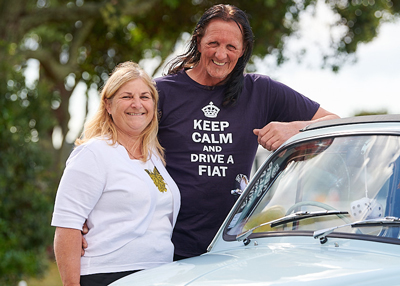 Neil bought the first Fiat in 2015 and spent several months restoring it. It was pretty rough, he says.

"It had no brakes, but the motor was OK and it came with a spare motor and spare gear box. The interior was sad; we gutted it and started again. We bought spare parts from the UK. And we managed to match the paint from the dashboard to get the original colour."

The paintwork was done by someone else and friends helped with the tricky bits but most of the work was done by Neil. Confident he could tackle more,
he set his sights on building the trailer.

"I found a car body on TradeMe for $50. The front half was rotten but the back half was salvageable, so it was perfect. That project took a while longer because I had to involve other people for panel beating, but it was worth the wait because they did a good job."

Neil and Kaye drive the car most weeks; the trailer, which carries picnic gear and folding chairs, is taken to shows.

"We cruise around with friends who have classic cars and go to shows where everyone parks up and looks at each other’s cars. You pay $10 a car which goes to charity and we get involved in the annual Toy Run, too, which involves around 400 cars collecting toys for children in hospital.

Neil likes that the car and trailer together get such positive attention.

"Just recently, coming home, some people passed us then stopped ahead and as we drove by I could see they were videoing us. Things like that… it’s fun."