Ian Green provides tips for families of those buying their first car.

Remember buying your first car? It’s an exciting, life-changing event and for most people it is the first big outlay in their lives.

Getting it right is important. Ideally, the decision will be made with input from experienced, knowledgeable people who they can trust. Quite likely, as a parent or care giver, you're among them.

Yes, some young people will want to avoid getting mum and dad involved. But some will be open to a discussion about what to buy and how to get the best deal. And for the lucky ones whose parents are funding the purchase or contributing to it, the decision might be by committee.

Whatever the scenario, we strongly suggest you take every opportunity to share your car-owning experience with the new motorist in the family, so they understand the true cost of vehicle ownership and choose to buy a car that’s reliable, good value for money and safe.

Typically the car is going to be an older, second-hand one and might, on paper, look cheap. That’s going to appeal to youngsters with not much disposable income.

But the cost of a car extends beyond the initial outlay and they need to understand that. Also, you want to avoid the situation where, having spent all their savings, the car becomes a problem and your son or daughter is tapping into the Bank of Mum & Dad.

Older vehicles, particularly those with significant kilometres on the clock, are likely to require ongoing maintenance. If the vehicle is less common on our roads, for example a European model or a rare import, then the cost of parts for any repair needed will be higher. But costs to keep any car on the road mount up. The cost of just one basic tyre will set them back around $150-$300; a standard service will leave a similar dent on their wallet. If things go wrong with the vehicle’s cambelt or clutch, that will mean a big bill – possibly headed your way.

Ensure your son or daughter knows to ask for service documentation or receipts for repair work done, advise them to check a vehicle’s ownership history, and urge them to not buy the cheapest car on the lot, because there’s usually a reason why that’s the case. Investing more up front can save time and money in the future.

Registration costs vary for different vehicles. Most older vehicles aren’t considered as safe as modern cars and therefore incur higher registration fees. This variable proportion of registration (the ACC levies) ranges from $68 to $158 for petrol vehicles, so that is another factor to consider.

Fancy features are standard these days: you’d be hard-pressed to find a car for sale that isn’t fitted with power steering and central locking. But what can be overlooked in a first car purchase is safety, and that should take priority over everything else. Performance attributes, superficial finishing touches, the shape of the car… nothing is as important as its safety features.

In 2015, an Australian research company recreated a real-world crash scenario between two used vehicles of the same class that were both being sold for $10,000. One was a 2009 Holden Cruze which had a 5-star safety rating. The other was a 2007 Mitsubishi Lancer, which held a 2-star safety rating. Pitted against one another in an offset head-on collision at 60km/h, the Lancer fared far worse, with there being an 88% probability of its driver fracturing his or her femur, a 72% chance of them fracturing an ankle and a 38% likelihood of them receiving severe neck injuries. This compared to 1%, 10% and 8% chances of the Cruze’s driver receiving the same injuries.

Each year, a guide to Used Car Safety Ratings is published using real-world crash data for nearly 300 vehicles in the Australian and New Zealand fleet. The latest guide provides important, valuable safety details about vehicles manufactured from 1996 until 2014, broken down into vehicle classes. It identified the 2001-2009 Peugeot 307 as a 5-star safety ranked vehicle in the small car segment.

This May, we looked at the TradeMe listings online and found a Peugeot 307 of that era for sale for $5,000. Other vehicles listed in the same category in the Used Car Safety Ratings Guide, and from the same era, were rated 1-star and were available for the same price. It’s some proof that safety doesn’t necessarily come at an extra cost.

Regardless of your age or situation, the AA recommends always buying the safest car you can afford.

Only after identifying a vehicle’s safety attributes should your teen start looking to the other bells and whistles like audio, performance and aesthetics, the non-essentials, which are often the things that they’ll get most excited about.

Stress the value of insurance

Flexible finance options can give young people access to a good range of vehicles. It means they could easily find cars decked with modifications that are within their budget. What they may not know is that vehicles with larger engine capacities and turbochargers, or those that have been modified to the max, may incur extremely high insurance premiums or the refusal of insurance cover altogether.

Advise them to get an insurance quote on the car they want to buy, before handing over a deposit. AA Insurance’s claims data shows that some car models are involved in accidents or stolen more often than others. These can be attributed to the driver as well as to the type of vehicle they choose to drive. Based on this information, which is constantly refined, the insurance company applies key rating factors, including age, to an initial base premium in order to come up with an individual’s vehicle insurance premium. 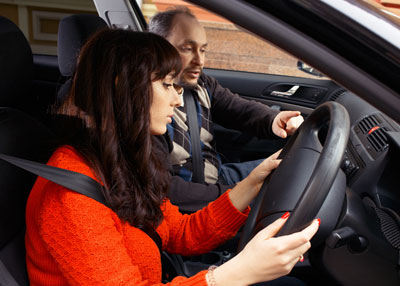 Because drivers under 25 years of age tend to have more accidents than those older than 25, their premiums will be higher. Also, if an under 25-year-old is listed as a secondary driver, say on their parent’s policy, then the premium as well as the excess will be higher. Despite this, it’s important for all drivers to have some form of car insurance.

While young drivers with less expensive vehicles might be tempted to go without, they should consider the implications of having a car on the road without cover. If they don’t have insurance but damage someone else’s car and it’s their fault, then they will have to pay for it themselves, either as a lump sum or over a long period of time.

If price is an issue, advise them to at least invest in third party insurance which, at around $4 a week, is less than a cup of coffee. This will cover them for damage they’ve caused to other people’s property.

One of the biggest mistakes made by first-time buyers is being in a rush. They ought to learn as much as they can about the model they’re interested in and shop around.

Offer to traipse around car yards with them to get a feel for what’s available in their budget.

Go with them to viewings of cars listed online. Often first-time buyers are so thrilled to be behind the wheel of what might be their new wheels, they neglect to take it on a proper test drive and ignore signs of problems. It’s best to find several models that fit the bill and drive them all, at least once. They can jot down the pros and cons of each on a list, which might help them decide.

You don’t have to have extensive mechanical knowledge to be of use at this stage. Just having driven various cars over however many years gives you an advantage. You will know the basics to check for – wobbly steering, uneven braking, strange noises from the engine or the temperature needle swinging wildly – and there is no shortage of good, inexpensive cars on the market, so go with your gut instinct. If it doesn’t seem right, leave it alone.

Once you and your excited son or daughter have made a decision, consider a pre-purchase mechanical inspection. These are a valuable tool to safeguard against buying a lemon.

Teens might not appreciate being told what to do, but some guidance will go a long way to protect them from the pain of post-purchase regret and excessive expense.

As a guardian, consider a gift of an AA Membership for your young driver. Knowing the AA will be there to help if something goes wrong will give everyone in the family some peace of mind.

The highest risk period for drivers is the first six to 12 months after they start driving solo.

• Follow their licence conditions. Restricted licences don’t allow the carrying of certain passengers or driving late at night because these have been shown to increase crash rates. Because it is illegal to drive outside of licence conditions, insurance is invalid whilst doing so.

• Never use their cellphone when driving and to keep their mind and eyes on the road.

•  Build their driving experience. Crash rates drop the more time spent driving; let them drive on family outings and get experience in a wide range of conditions.

• Do an NZTA-approved defensive driving course.

Reported by Ian Green for our AA Directions winter 2017 issue

Ethical investing: how your money can do good

Hamish Barwick investigates the best ways to invest with a conscience.