They say you never forget your first kiss. I’d have to add, ‘or your first car’. But the latter has one big advantage, for you’re unlikely to revisit that old romance to see how it would stack up against the benefits of experience. Which is exactly what I’m about to do with a Mini…

This exercise isn’t one without risk. Though my original Mini came with a plethora of mechanical problems, and the sorts of dodgy experiences only primeval motor cars can bring – like a windscreen that takes 40 minutes to clear on an icy evening drive – I remember it with enormous fondness. It was the car which taught me left-foot braking and handbrake turns, which showed me how much fun four wheels could be, and thus lead me to a thoroughly interesting motoring career.

But that career has put me behind the wheel of some enviable exotica, and I rather feared that driving an old Mini today might prove disappointing.

So we rigged the experience by roping in Mark Lewis, whose 1966 Mini Cooper S has a hill-climbing, rallying pedigree.

The Mini Cooper originated when John Cooper, a friend of Mini creator Alec Issigonis, saw its competition potential; it launched in 1961 with larger capacity, a bit more power, twin carbs, a different four-speed gearbox, twin fuel tanks and disc front brakes. Its first victory came at the British Saloon Car Championship in 1962, and further changes followed, including the debut of the more powerful S. By the time this MkII car left the factory it had a 1,275cc engine, and was a niche variant with just 6,300 built.

So the car is a long way from my standard Mini, despite sharing its diminutive dimensions and the spirit of a rocket-powered skateboard.

Mark searched for two years before he found this car a year ago. He joined the Mini club and trawled Trade Me but spotted it on Facebook, and thought, ‘Oh my God.’ He says it had been up for 15 minutes when he rang the owner, a Levin farmer, who seemed pretty casual when he promised to send photos.

There were a lot of photos. It had been sitting in a barn for ten years, and one showed a sheep in the car. But it seemed all original, and Mark rang right back and offered the asking price.

“He was oohing and ahing and being evasive…” turned out he’d received a flurry of calls offering more money. Mark matched it, sent a deposit, booked flights and flew to collect it.
It hadn’t been driven for a while, but started up, and he drove it home, already smitten. It was in exactly this condition: he’s done nothing to it bar an oil change and a set of radial tyres.

He says Austin Minis are unusual. This one was sold new from Wellington, spent most of its life in Central Otago, had done just 81,000 miles (130,357km) and boasts a top speed of about 145kph.

We didn’t put the top speed to the test, but when I start it up it sounds fabulous; rorty and rude, and very, very loud. There’s no sound deadening, and though much of the trim was replaced after its racing career, some of it’s missing – like the rear side panels. “It’s so noisy, that limits how far I go.”

It takes a kilometre or three to get the hang of the gear changes, and the fact it loves to rev. Hold those lower gears and it’ll rocket away from the lights, it’s so light you don’t need power steering and those front disc, rear drum brakes are almost savagely abrupt until you get used to them. 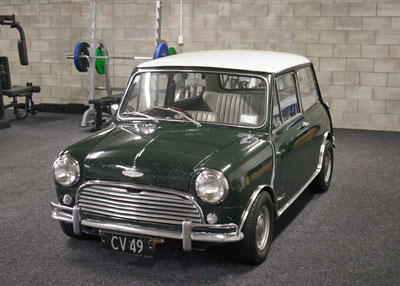 And very quickly I’m experiencing a familiar ear-to-ear grin, the happy hooligan vibe thrumming from the wheel, the tyres, and up through my arms until I feel like a race and rally legend, unstoppable, unbeatable and, ah, sadly not immune to speeding tickets.

I slow down, but it’s not easy to do, the car just seems to want to go.

What’s it like on fuel? “Terrible. Every time I fill it I think it should have lasted longer than it did,” he says.

“It’s so much fun. I love going for a drive on a Sunday, and in most cases I’ll jump in the Mini.”

To put that in perspective, he has an Italian thoroughbred parked alongside it. But he’s not going to stop there: he’s already on the hunt for two more Cooper S variants.

As for me, I don’t want to revisit my first kiss, but I’d love another original Mini in my garage, to bring back memories of youthful joi de vivre.

Reported by Jacqui Madelin for our AA Directions Summer 2017 issue

We investigated how a 2012 Toyota RAV4 Limited stacks up against the latest model.