Dara McNaught recalls a memorable drive from Tītahi Bay to Napier in a Morris 8.

Dad said it was the best tyre he’d ever had. It was just like new; it had lots of tread but it was a bit faulty and had a wobble, so had been sold to him for one-third the usual price.

He put it on the car, took it for a test run and it seemed perfect.

The Morris 8 was a famous car. It was a marvellous piece of engineering. It was built like a small rectangle with a box on top and had a particular bouncing action that we kids loved. We called it Puddlejump. Ours was a 1939 model, two-tone wine red and black, with bucket seats in the front and a bench seat in the back.

The car had no boot, but we needed to take everything for two weeks’ holiday, plus three girls, aged eight, six and four plus two adults. How to get everything on the car?

First, Dad rigged up a carrier on the back, bolted on, well secured.

That was loaded up to the level of the rear windscreen. Then we had a roof rack loaded as high as he thought was safe.

It was nowhere near enough.

So he borrowed two seamen’s bags and strapped them, absolutely packed full, on to the headlamps on either side of the bonnet.

Neighbours and their kids stood around in awe. We packed all the blankets, sheets and pillows on the rear seat and some on the front passenger seat.

We set off and drove without event from Tītahi Bay through Porirua and north along the main road, but cars had been tooting and people were pointing frantically at the lower part of the car all the way through Paremata, so as we came down the first hill at Plimmerton, Dad stopped the car. The only thing he thought it could have been was that wobbly new tyre.

Everybody got out and he untied everything off the back of the car and the roof rack and unstrapped the two seamen’s bags from the bonnet. He lifted the car, pulled the wheel off, checked the bearing – everything looked okay.

Then he checked the other side, just in case, but everything was okay there, too. So he tied everything back on, we piled in and off we went through Pukerua Bay.

We got to somewhere past Levin when the car just ran to a stop. Dad got out of the car and lifted the bonnet, but couldn’t see anything wrong.

We all piled back into the car and drove a few more miles before it dragged to a halt again. We got out; had another look. Couldn’t see any fault. Dad tapped things here and there and when he tapped the petrol pump, an electric one, it went ‘click-click-click-click’ and right away he knew that the pump was faulty.

We had no money to fix it, so we just kept going and every time we stopped, he got out, tapped the petrol pump and it started up again.

Then we worked out that every time he stopped and slammed the door, it started up again – so whenever the car started to slow down, he or Mum took to opening a door and slamming it, kicking it into life again.

We were bowling along a hot dusty road somewhere near Otaki and were in a slowing down phase when a young man on a bicycle pedalled steadily past us, gaze fixed on the road ahead. We slammed the door and the car sped up and passed the cyclist. After a way we were drawing to a halt when the cyclist passed us again, head down, pedals racing, not a flicker of acknowledgement; he’d done this half a dozen times before Dad stopped to have another look at what was going on. He decided to make a hole in the firewall so that Mum could poke a stick straight from the front seat into the engine; whenever the car started to go ‘click-click-click’ and slow down, she would give it a few enthusiastic whacks with the stick and away we’d go.

This went on until we got into the steep roads of the Manawatū Gorge. Near the bottom of the gorge the cyclist had got ahead of us.

We chugged slowly up to about halfway and there he was, leaning against a rail at the side, gazing into the sheer valley below, pretending not to see us pass him.

Towards dark we got to Dannevirke where Reith’s Garage was open. We pulled in and the mechanic didn’t
even wait for Dad to finish his story.

He opened the bonnet.

“You won’t get anywhere with this, mate,” he said. “And I can’t fix it. What I can do is give you an exchange petrol pump. It’s the Morris 8’s weak point, we always carry replacement pumps for just this purpose.”

“Well, this is awkward,” Dad said, “because I’ve got no money. We’ve only just started our holiday and it will be two weeks before we’re home.”

“That’s all right,” the mechanic said. “You pay me as soon as you get back home.” Dad said it was like a miracle.

We found the petrol station and just as we pulled up someone in the car asked: “What was that noise?”

Sure enough, it was a rear tyre that had gone flat just at that moment.

The timing! Dad said it was another miracle.

At last we drew to a stop outside the brightly lit house on Bluff Hill in Napier. Dad leaned forward and patted Puddlejump on the dashboard and my sisters and I tumbled out and ran to greet our beaming Nana.

Reported by Dara McNaught for our AA Directions Summer 2019 issue

Jackie Norman and her husband, Gareth, bought Ken in 2017. In a huge leap of faith... 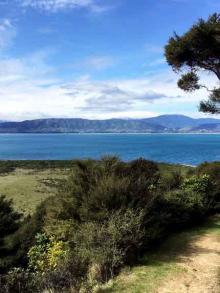 Being close to nature can provide real insight into our environment