Two of New Zealand's newest and safest roads have risen to 110km/h.

The two multi-lane roads, Tauranga Eastern Link and the Cambridge section of the Waikato Expressway, have been designed to a high standard with a number of safety features including median barriers to separate oncoming traffic, barriers on the left to prevent vehicles running off the road, wide shoulders, limited entrances and exits and good forward visibility. Their new 110km/h limit is in line with the speed limits on highways of similar quality in other countries, including Australia.

In a survey undertaken in August 2017, 79% of AA Members supported raising the limit to 110km/h on our safest roads. However there are some rules with these new limits:

• Any vehicle towing, along with all heavy vehicles, including trucks, buses and large campervans, continue to be restricted to a maximum speed of 90km/h.

• Slower vehicles should travel in the left-hand lane at all times so that the right-hand lane remains free for faster-flowing traffic. A 20km/h speed differential will make it easier to safely pass slower vehicles and help facilitate traffic flow.

• 110km/h is the maximum limit in ideal conditions, not a target. In some situations you may need to drive significantly more slowly than the posted speed limit if the weather or other conditions are poor.

• Because these roads have at least two lanes in each direction, people should not feel they have to travel at 110km/h if they are not comfortable at that speed. Anyone travelling below 110km/h should stay in the left-hand lane. 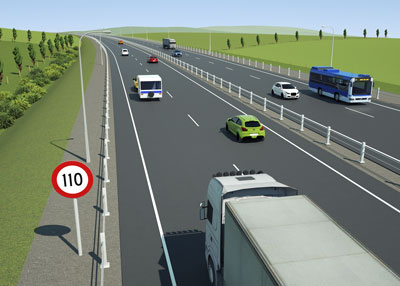 The AA regularly surveys Members on a range of topics. Our surveys cover speed limits, fuel prices, public transport, driving habits and much more. Because more than a million individuals are AA Members, the results are valued by authorities as a gauge of what the wider public thinks.

What are AA Members' views on travel speeds?

66% say they have recently driven on a stretch of road and were unsure what its speed limit was.