Road rules - how to pass safely

Dangerous passing can lead to serious crashes on our roads. Two per cent of all fatal crashes, and three per cent of serious injury crashes are as a result of overtaking or unsafe lane changes.

Drivers stuck behind slower vehicles can get frustrated and then try risky overtaking manoeuvres. Passing lanes and slow vehicle bays offer the safest opportunity for drivers to overtake slower vehicles.

Passing lanes
When approaching a passing lane: The AA recommends regularly checking your mirrors and, if you have several vehicles behind you, signalling left and moving into the left lane as soon as possible. Watch your speedometer and don’t let your speed creep up when you get to a passing lane. You may even need to slow down to allow as many following vehicles to pass as possible.
The Road Code advises that before passing, make sure you will be able to see at least 100m of clear road ahead once you have finished passing. Check behind (both your mirrors and blind spots) to make sure there are no vehicles overtaking you. Signal for three seconds before overtaking, and then check that you can see the vehicle in your rear view mirror and signalling for another three seconds before pulling in front of the vehicle 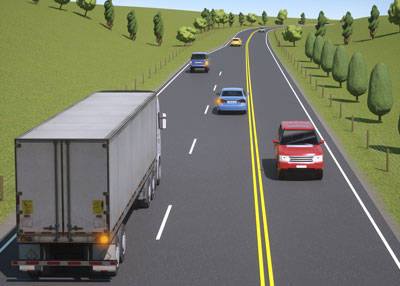 At the end of a passing lane
The best way to merge is like a zip, whereby drivers let one vehicle from the other lane go first, and then go. Vehicles in the outer lane don’t have priority. Vehicles in the left lane should signal right, and vehicles in the right lane should signal left.
The same rules apply to motorway and expressway on-ramps.
If you are travelling in the left lane, watch for traffic on the approaching on-ramps, be prepared to merge, and don’t speed up.
If you are using an on-ramp to enter a motorway or expressway, the Road Code recommends matching your speed to that of the main traffic. Use the whole length of the on-ramp to adjust your speed; don't change speed suddenly just as you enter. Signal right for at
least three seconds and don’t enter the road at a sharp angle. 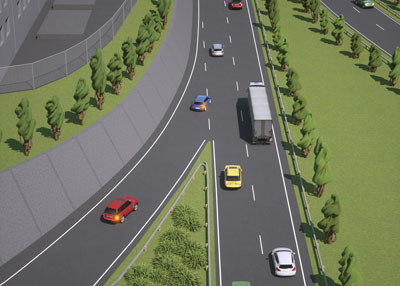 Slow vehicle bays
Slow vehicle bays are like passing lanes, but much shorter. They are often located on hilly and winding roads where there isn’t room for a long passing lane. If you have traffic behind you, you should keep left and pull into the slow vehicle bay and allow others to pass. Slow vehicle bays aren’t just for trucks, tractors or cars towing. They are for anyone travelling slower than other traffic. You should regularly check your mirrors and, if there are several vehicles behind you, pull into the slow vehicle bay and slow down, if it is safe to do so, to give the other traffic a chance to pass safely. Some bays are called stopping bays for that purpose, but the same rules apply: if there is traffic behind you, pull in and stop and wait until the traffic has passed before re-entering the lane. 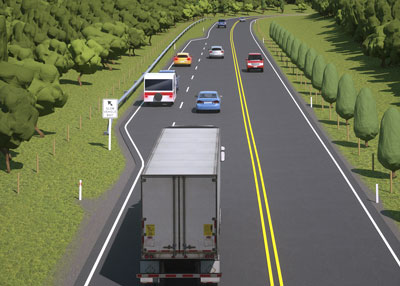 Check out the Road Code  for more information.