Barney Irvine of the AA’s Transport Technology Group looks at the rise of high-tech safety features in modern vehicles.

The winning vehicles of each AA Driven Car of the Year category in 2018 all have one thing in common: good safety technology.

Most of us are familiar with features like autonomous emergency braking, adaptive cruise control and lane departure warning. This technology has been around for a while and helps to keep us safe on roads. It sees drivers alerted ahead of a crash and apply maximum braking power. It automatically adjusts vehicle speed to keep a safe distance from the car in front and signals if a vehicle is about to veer out of a lane.

It’s proven to help significantly reduce the likelihood and severity of crashes, but has typically only been available on more expensive brands and models. What we’re seeing now – and what the winning Car of the Year vehicles in each of the 11 different categories demonstrate – is that these features are becoming standard across all new vehicles. From the $30,000 Suzuki Swift to the $150,000 BMW 5-series, all the winning cars have this technology.
General Manager of AA Motoring Services, Stella Stocks, says it’s a case of the market responding to demand.

“People now see these features as ‘must-haves,’ not ‘nice-to-haves’ and any car manufacturer that leaves them out risks falling behind the pack.”

Technology that supports driver attention is also becoming more mainstream. Most of the winning vehicles include features that identify and alert the driver to signs of fatigue or reckless driving, like constant corrective steering or sudden braking and acceleration.

The Hyundai Kona monitors driving time and signals to the driver when they should take a break. The Subaru Forester is equipped with a ‘Wandering Gaze Warning', which uses facial recognition technology to determine if the driver is dozing off, based on the length of time their eyes are closed.

Meanwhile, the higher-spec winners provide a window into the sort of features that will be commonplace on our roads five or so years down the track.

A recent AA Survey indicated that more than half of Members had been in a situation where they didn’t know what speed zone they were driving in. The Mercedes A-Class, the BMW 5-series and the Mazda CX-8 are kitted out with Traffic Sign Recognition which allows the vehicle to read speed signs and display the correct speed to the driver, giving a warning if the speed is exceeded.

The Mercedes A-Class also comes with a ‘space-age’ dashboard, which can be operated by voice when the driver uses the “Hey, Mercedes” trigger phrase, similar to the technology used in Google Home and Alexa, or Siri on smartphones. This feature draws on artificial intelligence to study driver behaviour and provide options for things like phone calls, news bulletins and driving routes without being prompted.

Augmented reality is part of the package, too. The dashboard navigation system overlays directions on a live camera feed of the road ahead, superimposing arrows to indicate the correct place to turn and street numbers to show the final destination.

While these features are about convenience, Stella says they have an important safety element, too, because they reduce driver distraction.

“What’s amazing is that this is the cheapest model in the Mercedes range at $60,000 to $70,000. Previously, you would have had to go for the luxury models – and spend twice as much – to get anything like this.”

Stella says the AA is delighted to see the progress in vehicle safety technology, but worries that if New Zealand infrastructure doesn’t keep pace, the full potential of innovation will be lost.

Currently, lane departure warning technology only works properly on motorways because the quality of road markings isn’t up to scratch elsewhere.

As new cars become increasingly intelligent, consistency of both road markings and traffic signs will be required, not just across New Zealand roads, but all of Australasia.

GPS and communication infrastructure is still well behind where it needs to be if tomorrow’s cars are to be able to ‘talk’ to each other and the road environment, which is when the most important safety benefits become possible.

“Without infrastructure, we don’t get the benefits – safety or otherwise – and we want to see policy-makers give it more focus.”

The AA’s Transport Technology Group serves to inform the AA and its Members on where technological change is taking the transport system.

Reported by Barney Irvine for our AA Directions Autumn 2019 issue 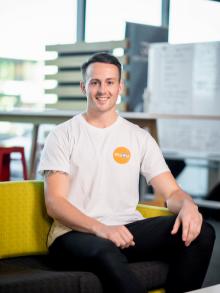 Sharing is caring: the circular economy

Jo Percival looks into an app that is changing the cycle of consumption.

The long wait for new cars

If you’re in the market for a new car in New Zealand, be prepared for...