Something in the air

Graphic designer Joseph Ku was driving his son Jaedon home from school in the Christchurch suburb of Harewood when he spotted a shiny vintage aluminium Airstream caravan passing by, and was smitten.

“I saw it and it was like love at first sight,” he recalls of the moment back in 2013. “The Airstream is like the pinnacle of caravan design. It’s probably the most beautiful caravan that’s ever been made.
“I said to my wife, ‘hey, I want one – where can I get one?’”

With the help of Trade Me, Joseph became the proud owner of a 20-foot Flying Cloud, one of three Airstreams imported direct from the Ohio factory in the United States by the late Dunbar Sloane Snr, whose family runs New Zealand’s oldest auction house.

“He loved the RV (recreational vehicle) business,” says Brad Jackson, a professor of leadership who interviewed Wade for a documentary film used to teach management around the world.
“He loved making them, and he loved selling them!”

The year after Wade died in 2009, his friend, Sloane Snr, bought a small, medium and large Airstream for his family holiday spot in Pāuanui on the Coromandel Peninsula, where he positioned the striking caravans around a big canvas African Safari tent.

“There were always people walking around, staring in,” reminisces his son Dunbar Sloane Jnr, who now runs the auction house. “It was quite an eccentric set-up, but it was good fun!”

Sloane Snr held the New Zealand license for Airstream but while many people were interested, converting them to New Zealand standards proved too much of a barrier for most.

“It was a huge, huge effort to get them working in New Zealand,” says Sloane Jnr. “I think that put a lot of buyers off. It’s a pity they don’t come set up for New Zealand, otherwise I think they would sell like hotcakes.” 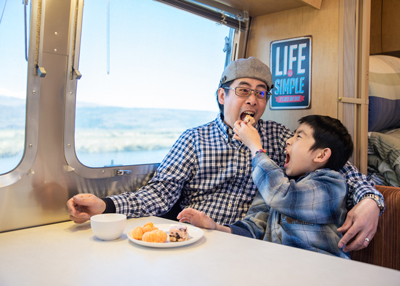 Today, there are 80 Airstream caravans registered in New Zealand, according to the New Zealand Transport Agency. Some of those have been turned into eye-catching retro coffee carts and food vans dotted throughout the country.

Aucklanders Grant Collins and Joanne Langwell brought three vintage Airstreams back from the USA in 2017 and have turned the 31-footer into The Land Yacht Bar, which is hired for weddings, functions and corporate events around New Zealand.

One was sold and now resides on Great Barrier Island, and Grant has been living in the 25-foot Tradewind fulltime since July last year, after selling his automotive workshop.

“I love it. I can just pack up whenever I want to and hit the road,” he says.

Except when there is a global pandemic of course. The 58-year-old was camped at Ōhope in March when the country went into lockdown and hunkered down for the duration. After the initial isolation, he and the other campers had a fantastic time, enjoying movie and pizza nights parked up at one of the nation’s most beautiful beaches.

Globally, Airstreams are experiencing a boom, as the tiny-home movement drives demand with lifestylers, and Millennials seek adventure and experiences. Unique accommodation offerings like Airstreams, with its distinctive aeronautical design, have become popular through services like Airbnb and there are now even Airstream hotels such as the AutoCamp chain in America.

Back in New Zealand, Joseph Ku says he’s seen increased interest through the New Zealand Airstream Club he set up. Still, he says there aren’t many for sale here and importing them is pricey, starting at about $50,000 for a vintage model.

Airstream opened a new factory in Ohio this year which will allow it to more than double production. While it experienced a setback due to Covid-19 in March, with production stopping almost overnight, it reopened in June and chief executive Bob Wheeler says he is seeing signs the industry will emerge in good shape, with better-than-expected sales.

“There is great potential for Airstream to come out of this crisis stronger than ever,” he noted in a pandemic update. The company’s research found people wanted to avoid crowds, were more interested in RVs and favoured travel to isolated locations such as national parks.

That resonates with Joseph Ku, who along with wife Ying and son Jaedon, hitched up their Airstream for a trip to Tekapō in the winter school holidays.

“Covid-19 gave us more time to spend with family and has reminded us that we should go out and enjoy the great outdoors a bit more,” he says.

Reported by Tina Morrison for our AA Directions Spring 2020 issue