I don’t have a tat etched over my heart proclaiming that 'Holden Rules' or a walk-in wardrobe dedicated solely to Ford Falcon anoraks, but I do love my cars. Especially very fast cars.

My family knows this. And so, for a recent birthday, they delivered me an encounter with an organization called Drive Supercars which provides the opportunity to experience super-speedy driving on the Hampton Downs race track near Mercer. My super fast, supercar of choice was a Lotus Exige.

The 20-minute pre-drive briefing and video focused mostly on cornering lines, stressing the need to use all the road by entering wide, clipping the apex or inside of the corner and exiting wide again. And we were told to brake before the corner rather than during it.

Then I hopped into the passenger seat of a Mitsubishi Evo X for a familiarisation lap. It was my chance to get a feel for the track, to find out the best line through the curves, and to have a look at the braking signs. And also to discover, to my surprise, a coned chicane, with 90-degree entrance and exit at the end of the corner leading into the home straight. It was first-gear stuff, a health and safety requirement to prevent any unduly high speeds on the straight.

Fair enough I guess, considering that all sorts and ages will line up for a drive, but I’d hoped to get to 200km/h. Ah well.

Then to the Exige, powered by a Toyota engine developing 141kw. If that doesn’t sound much, it’s how you skin the cat. The Exige is pared to racing minimum and weighs just 890kg, some 60% lighter than the similarly powered Honda Euro, for example. 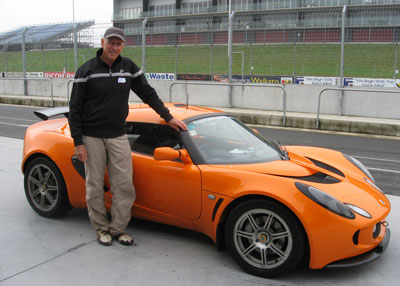 The car sat so low that my lanky limbs took time installing themselves in the extremely snug cockpit.

The car wrapped itself around me like motorcycle leathers – and around my supervisor, sitting in the passenger seat. I noticed he had his very own brake pedal. I found that reassuring.

And he had an intercom system. Though it’s not a race, there are usually two or three cars on the track and sometimes faster needs to overtake slower. The intercom system makes the manoeuvre foolproof. It’s obviously helped the Drive Supercars organisation maintain its impeccable safety record of 35,000 laps without an accident.

Turn on the ignition. Rumble. And off we went for my precious five circuits, the supervisor having checked my sitting position and pronounced himself satisfied with my nine-and-three hand position on the steering wheel. It was an exhilarating ten minutes – and in retrospect a very safe one. The laps whistled by. The supervisor encouraged and advised. My cornering lines and my speed improved. On the last lap, when I perfected a line on a bend that had eluded me previously, it felt as aesthetically pleasing as a brush stroke by Van Gogh. My instructor advised me to keep to second and third in the close-ratio six-speed manual, with maybe a few seconds of fourth on the home straight before the braking marker. The car thrived on hard work, screaming into life above 6000rpm, at which point it accelerated somewhat faster than a bolt of lightning. And it made a wonderful noise that sounded like a hundred howling tomcats battling with a gross of electric egg beaters.

My eyes were so busy gauging lines and keeping up with the rev counter that I managed only one glance at the speedo on the last run up the home straight: almost 160km/h. I was happy. It was not about outright speed, but about driving as best I could a sublime sports car, that I could never afford to buy, in an environment that allowed me to focus entirely on exploring my limits, unconcerned by opposing traffic or speed cameras. What a blast. I’ll never be satisfied again with a pair of socks for a birthday present.

Driving home, I realized my driving was sharper and more focused. Those few minutes in the Exige at Hampton Downs had demanded my utmost in reflexes and concentration. That utmost travelled with me back to Auckland.

I was more aware of the traffic, of longer and safer lines round corners, and I was looking further ahead for any trouble. And I appreciated all the more how the combined speeds of opposing traffic added up to racing numbers.

Reported by John Parker for our AA Directions Summer 2017 issue

Despite the many struggles 2020 presented, AA Motoring experts managed to test more than 65 new...

What can be done about red light runners?