There are 200 million e-bikes pedalling across the globe today, according to the Electric Bike Worldwide Report. And the market is poised to grow. The popularity of e-bikes springs from several key concerns: climate change (e-bikes have zero carbon emissions at the point of use), ever-increasing traffic congestion and personal well-being (exercise of this type is recommended for counteracting stress, obesity, diabetes and depression – all major world problems today). Such is the popularity of electric bikes that certain quarters are taking it very seriously.

Car makers like Ford, BMW and Mercedes have spent R&D time and money on e-bike innovations. E-bikes are now considered a viable alternative to the car for ameliorating the commuting nightmare that is a reality of most modern cities: a folding electric bike, extracted from your car boot or the train carriage is an ideal last kilometre commute, if not for the whole journey. 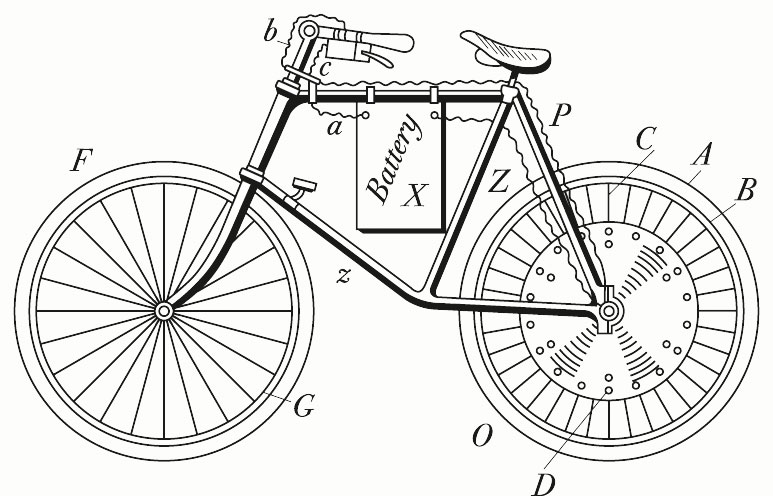 The demographic of e-bike commuters and recreational users is all ages, but the largest uptake, causing a spike in recent years, are those who have not parked their posterior on a saddle for years, perhaps decades. Now, with an e-bike that’s like riding with a constant tailwind, middle-aged and older people have a second chance at two-wheeled commuting independence. For those about to embrace an e-bike with unbridled enthusiasm, a note of caution: e-bikes are not effort free. They are described as ‘pedal assisted’. This will get you up slopes and speed you along the flat … and burn off some of those undesirable calories. E-bikes have been around for more than 100 years. In 1895, Bolton Jr patented a design for an electric bike with a battery suspended from the central frame connected to a rear hub motor that is remarkably similar to those whizzing along the roads today.

Nowadays, e-bike development is happening at breathtaking speed. A few years ago, e-bikes used a modified standard bicycle frame equipped with a clunky, clipped-on battery powering a motor in the hub of a wheel. Today’s cycleways are increasingly populated by sleek aerodynamic frames with a fully-integrated form-fitting battery that finds influence in automotive design. Form, function and balance are increasingly in harmony. Advanced battery technology has been a key driver for the popularity of e-bikes. Leading battery maker,

Tesla, markets a battery comprised of dozens of cells, like torch batteries, that are smaller, lighter, last longer and are faster to charge. Companies like Mercedes, which produces the Smart e-bike (a cousin to the Smart car), have tinkered with ways to recharge the battery while riding, using a power regenerating braking system that arrests the motor, reversing polarity, turning it into a generator.

There have been experiments with bike frames constructed with a wrapping of solar cells. Does it work? Reviews vary, but R&D in these areas should be encouraged. Belt drives are replacing chain drives, tensioned in such a way that the days of prising your greasy chain back onto the cogs are gone. And, apart from a mellifluous buzz from the e-motor, riding is a silent, perhaps even meditative affair.

Smart bikes are coupled with tailor-made e-bike apps, or cross-pollinate to existing apps. A smartphone-smart bike captures a network of new and existing data. Health data, which counts, say, the number of steps taken and distance cycled, furnishes the rider with an estimate of the amount of calories used in a day. A smartphone can turn lights on, report your current battery power, register speed and give you your location. Ford’s MoDe e-bike vibrates to warn you of an upcoming pothole. Wireless connectivity enables you to remotely secure your bike by deactivating the battery and motor. You’ll be alerted if someone attempts to take it for a joy ride. Future smart e-bikes will ‘talk’ to each other in a network of communication, as touted by the futuristic smart autonomous cars.

The value of this may seem dubious, but in cities like Copenhagen where bicycles are the commuting vehicle of choice, bike traffic jams are an increasing concern and can be avoided by providing alternative routes. Some smart e-bikes measure gradient to grunt (or lack of), changing gear ratios automatically to suit rider fitness, producing the optimum performance and comfort.

Many e-bikes have an integrated USB port that allows you to connect and charge multiple devices, such as tablets or laptops, and, of course, your smartphone. Smart streets are gathering momentum, with beacons transmitting information to smartphones, alerting riders to nearby cafes, movie theatres or bicycle repair shops. Already we are seeing some local authorities in New Zealand incorporate e-bikes as part of their staffing transport needs. Smart connectivity will be able to track the use of each bike, providing data on when the bike was used, how far it went and ensuring security when parked. The network of cycleways throughout New Zealand continues to grow and improve. The use of e-bikes in our country as a valued form of commuting will grow, relative to an increased and safe network of cycleways. And let's not forget one major bonus of electric bikes. Yes, they're great for getting to work – with minimal exertion.

Running costs are low. And it's an activity the whole family can engage in. You can start out relatively unfit, and gradually and easily build your fitness level. But there is something else; they’re great fun!