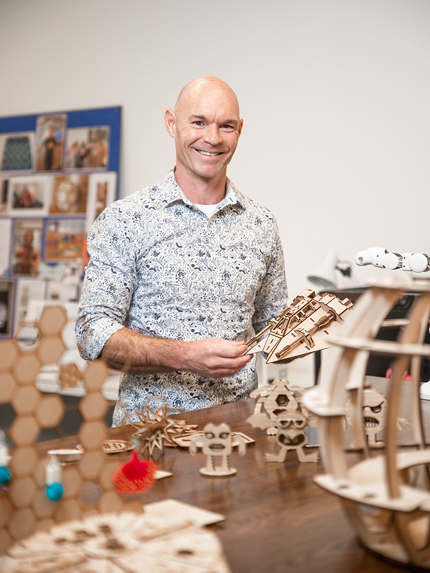 When it comes to opportunities within Tūranga library, it seems to be limitless; the Special Projects team at Christchurch’s central library even touches on space flight.

Almost two years after it opened, the library pulls in about 2,400 people a day, including aerospace university students helping secondary pupils with a space-themed physics programme.

It attracts book borrowers, of course – but also locals and travellers needing to sew a pair of pants at one of the four sewing machines on the top floor. Or musicians who access the high-quality recording studio in an adjacent media suite.

Or entrepreneurs keen to test a business idea on the 3D printers and laser cutters that are staffed by resident experts. Meanwhile, parents bring their children to Tūranga for birthday parties amidst 125,000 pieces of Lego construction blocks on the hapori (community) level of the architecturally-designed four-storey building.

The first level is also the place to find books for children and young people, a craft area and an espresso bar.

Library employee Danny McNeil is a learning specialist on the team that helped bring some of these innovations to the public building, after the original city library was felled in the 2011 Christchurch earthquake.

“It’s a second chance,” Danny says of the decision to rebuild a new kind of library. “It provides equity of access to a whole lot of equipment that people wouldn’t otherwise be able to get to; it helps bridge the growing digital divide. Back in the old days, books were too costly for the common person. Books and literacy were the realm of the wealthy. Now, there can be real barriers around some technology and we want to be the ones to democratise all that stuff.”

He says the library has also hired experts to help people use the high tech equipment. The media suite, for example, is overseen by three tertiary-trained experts in film and music production.

“It’s hugely costly to get commercial studio space, so we have loads of emerging artists around town who use it, lots of rappers and a guy originally from Chile who is producing his music from our studio.

“We can facilitate podcasts, webinars and we’ve also had a local Pacifica group who read English stories in their own languages so they could deliver them back to their own children.”

Danny says the library’s resources support the local economy, too. He recounts the tale of entrepreneur Anthea Madill who wanted to use 3D printer waste and plastic offcuts to create new, saleable items.

Following a chance meeting, he invited her to visit the library and work with its publicly-accessible equipment. “She was trying to develop a social enterprise but was struggling to get traction or easy access to equipment and expertise. We got her up to the library and she reused five years’ worth of plastic waste that I’d been storing. Anthea prototyped earrings, book covers, buckles – a whole range of products – and went on to sell them.”

The resulting enterprise, Remix Plastic, received national attention and an avalanche of orders after Prime Minister Jacinda Ardern appeared in public wearing a pair of feather-shaped earrings that were made from waste plastic.

Danny says a willingness to listen to people is key to the library’s success. At the outset, that meant extensive public consultation and a partnership with Matapopore and mana whenua that provided new opportunities to relay the city’s cultural history.

“That robust community engagement meant people have got what they actually wanted.” More recently, Danny listened to an eight-year-old boy who told him the library’s after-school programme would be better attended if it incorporated the Minecraft online game.

“Now, Minecraft is huge, it’s massive. We’ve seen it evolve into an incredible education platform, with a whole lot of curriculum-focussed activity in science and nature. Library staff have built an ‘empathy’ Minecraft world. And our after-school programmes are constantly in waitlist mode, in four or five locations round the city.”