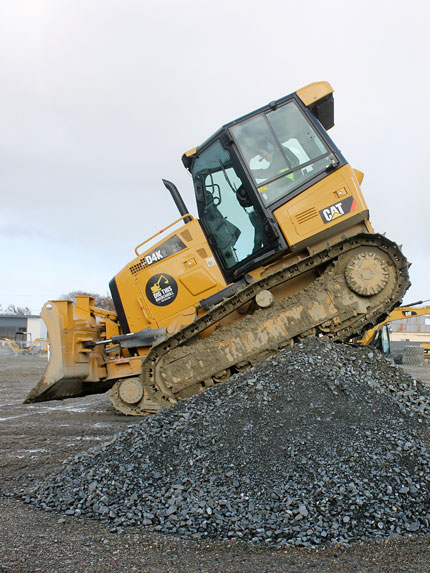 Climbing behind the controls of a 15-tonne excavator, I was suddenly questioning every decision which had led me there.

“You’ll be fine,” Dig This Invercargill manager Lex Chisholm said, grinning at my apprehension. With my headset on, listening carefully to Lex’s directions, I was very aware of the sheer power behind the machine I was about to control.

“Left hand in,” came the first command. A control in each hand, somewhat akin to a video game simulator, I moved my left hand slightly, to test how quickly it would react. The entire cabin swung around before coming to an abrupt stop as I drew my hand away from the control. Another grin from Lex.

Whether it was the easy-going attitude of my instructor, or the simplicity of the controls working the machine, it wasn’t long before I found my groove. Within minutes I was working both levers simultaneously to move tonnes of loose gravel. Any anxieties were buried under rocks.

This is the beauty of Dig This Invercargill. Promoted as New Zealand's first heavy equipment playground, the attraction enables anyone keen to realise a love for digging and destruction. People like me get to operate diggers, bulldozers, skid steers and small static machines.

And the car-smashing area is an attraction in its own right.

Eager for me to try my hand at his own personal favourite, Lex guided me to the 11-tonne D5K bulldozer and gave me a quick rundown on the controls. Blindly following instructions, I found myself teetering atop a gravel hill which I, myself, had bulldozed, perfectly balancing at the top. I felt like a professional. Not solely because Lex was in my ear telling me I was a natural (I’m sure he says that to all the ladies), but because I had managed to do something I never thought possible.

Dig This Invercargill isn’t a weekly trip out with the family, it’s a chance to do something unique and exhilarating; something you never dreamed you would do. It's a once-in-a-lifetime thing.

In 90 minutes I learned to perform a ‘handstand’ on a 312E Excavator and pluck a basketball from a road cone. I had dozed myself into a massive hole and spent time hooning around on a track-type skid steer. I was a child in an oversized sandpit. In just 90 minutes I had gone from “it’s not my thing” to “just five more minutes!” and as my Certificate of Accomplishment (proudly displayed on my fridge) acknowledges, I really did get ‘down and dirty’ in Invercargill.

Reported by Sharon Reece for our AA Directions Spring 2020 issue