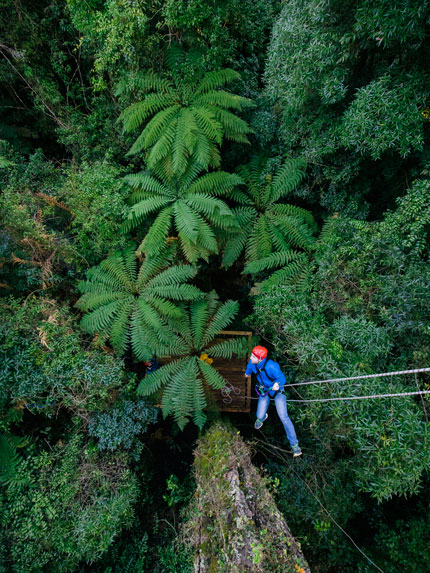 Standing tall and straight, like the trees around me, I look Cheynne in the eye and then fall backwards into the void.

I’ve thrown myself off a 20m platform. I know I am attached; I know the harness and its clips and straps are strong – but I am way too high to survive a fall to the ground and every cell in my body knows this.

Yet it was easy to do. I fell back and relaxed into the ride – a flight high across a deep shadowy gully awash with multiple shades of green, massive trees rising just beyond reach of my outstretched limbs.

It was easy to do because I had built up to it: this was the fourth zipline of the day. The first – reached after a short walk through stunning, original native forest on the outskirts of Rotorua, then a spiral-staircase climb around a great old rimu – was the scariest.

I watched and listened intently as the guides – Cheynne and Spencer – went through the clipping on, clipping off procedures, the checking of helmets, the safety instructions. My nerves were no match for their confidence and enthusiasm though and without too much hesitation, I launched off that first tree house with a whoop – and loved it, the rush of flight and lightness, the incredible reality of being so high and the sights unfolding from angles usually reserved for birds.

My three hour Ultimate Canopy tour involved six rides along a total of 1200m of zipline, a meander around a cliff walkway suspended 50m up, a wobbly trot along a 75-metre swing bridge that really knew how to swing – and the final bit – an 18-metre controlled abseil that I’d been nervous about the day before, but when it came to it, was a piece of cake.

In between the thrills, we learnt about the development of the bush experience – how the founders of the original Canopy Tours wanted to create something longer, higher, more spectacular. And the Ultimate Tour is spectacular; it’s audacious, in a way, leading humans up such heights and letting them fall like that into the abyss.

But aside from the sheer adrenaline rush, there is a heart-warming pleasure in having special access to ancient native forest. The tour company’s conservation efforts have resulted in the healthy return of robins, tomtits, kererū, tūī and bellbirds, so much so that the forest is positively noisy with birdsong.

And now I know what they get to see, I understand what they’re singing about.