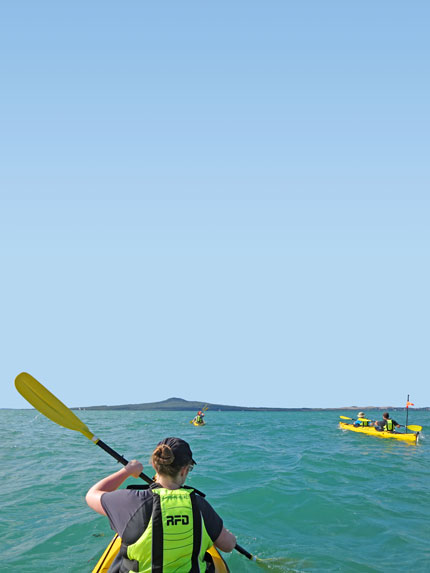 Tackling the five-kilometre journey across the Tamaki Straight under a carpet of stars feels intrepid.

"There’s a small headwind,” our guide, Sarah, says, “so it'll be harder to get there but easier coming back.”

Clearly, Sarah’s definition of a “small headwind” and mine are rather different. The stiff breeze blowing in our faces wouldn’t be an issue if we were catching a ferry from St Heliers Bay in Auckland to Rangitoto Island, but it will be a factor given we’re tackling the five-kilometre journey by kayak.

Adding to my concerns is that I’m sharing a boat with my sister, who considers herself a kayaking expert and has an instructional style that can only be described as assertive.

After being kitted out with lifejackets and spray skirts, we launch our vessels into the Hauraki Gulf and aim for Rangitoto.

“The key to paddling into a headwind is to keep a nice, steady pace,” Sarah says. Of course, it also helps if you’re heading in the right direction and I’ll confess it takes me a while to master the foot-operated rudder, a fact my sister reminds me of constantly.

Apart from ferries, commercial boats aren’t allowed in the Tamaki Straight so at least my fears of being run over by a supertanker are unfounded.

Once there, we relax in the sunshine while Sarah whips out a camp stove and conjures up a feast of steak, salad and ratatouille.

Then we start the strenuous but scenic two-kilometre trek to the island’s summit. The path meanders through fields of solidified lava and the world’s largest pōhutukawa forest. Near the top is a 200-metre-wide forested crater that only 600 years ago would have been spewing angry torrents of lava.

“I never get tired of this view,” Sarah says when we reach the viewing platform at the summit. And it’s easy to see why.

The harbour stretches out around us – a beguiling montage of islands, coves and peninsulas.

To the east is Waiheke Island and beyond that, the dim shadow of the Coromandel Peninsula.

After watching a sigh-inducing sunset, we don head torches and retrace our steps in the fading light of the day.

By the time we reach the boat ramp it’s 9.30pm and jet black. Each kayak has a light but Sarah stresses it’s particularly important we stay together going back. She points out a cluster of lights on the horizon to aim for and we set off, carefully dipping our paddles into the oil-black water.

Kayaking at night feels daringly intrepid – as if we’re secret agents on a covert mission. For the next hour we paddle towards the city’s twinkling lights under a sky pinpricked with stars. It’s my favourite part of the trip. The only sound is the rhythmic splash of the paddles in the water. No one speaks, not even my sister.

Reported by Rob McFarland for our AA Directions Spring 2020 issue