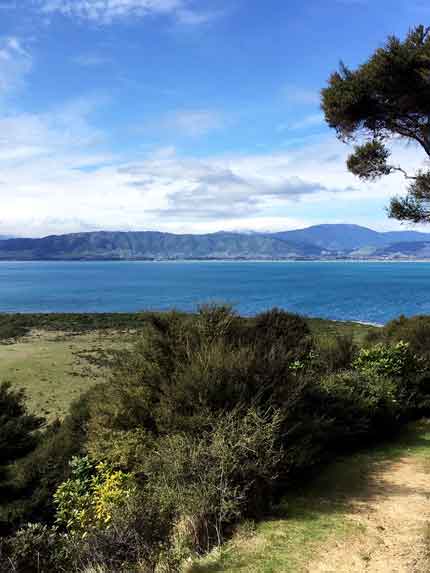 Being close to nature can provide real insight into our environment

If what happened within the first five minutes of stepping onto Kāpiti Island is anything to go by, then I am in for a treat for my time here.

“Who’s seen a little blue penguin before?” Kāpiti Island Nature Tours host, Wayne, asks the group as we unlace our tramping boots at the front porch of the shared dining area. Just a few hands are raised.

We had not long disembarked the ferry from the mainland in Paraparaumu north of Wellington when Wayne gently pushes the doormat aside and tells us to look down through the wooden slats. Right there on our doorstep – or rather underneath it – sit a pair of nesting penguins.

It is a perfectly apt introduction to the island: a nature reserve home to an abundance of wildlife and New Zealand’s largest population of little spotted kiwi. Its status means it’s the most protected of public land, a thriving paradise where human influence and interaction is closely monitored and kept to a bare minimum. In fact, members of the public are not allowed ashore without permission – by way of arranging a tour or travelling on the island’s ferry.

The island has an interesting past. For more than 800 years it was home to many people; some of their ancestors live there still and have founded Kāpiti Island Nature Tours to share their stories with guests like me. We’re told of how the island has been home to waves of European interest in the form of early explorers, like Captain James Cook who named Kāpiti ‘Entry Island’ because of its proximity to Cook Strait. The island was farmed and later served as a base for thousands of commercial whalers from as far away as Australia and America.

In the 1800s, New Zealand’s Prime Minister at the time, Richard Seddon, introduced a bill to acquire the island to conserve its flora and fauna. An agreement was made for local Māori residents to keep some land around Waiorua Bay, where I’m staying, and the remaining near 2,000 hectares was given to the Government.

For more than 100 years it’s been maintained as a wildlife sanctuary and today is managed by the Department of Conservation. I feel very privileged to be experiencing it with people who treasure the land and its wildlife.

We take a guided walk at Waiorua at the north end before settling in for the night at the lodge. Ruru calls echo through the still night as we finish dinner but the adventure isn’t over for the evening. Kāpiti Island Nature Tours has given us a very special gift: the opportunity to spot a kiwi – not in captivity, an enclosure or monitored space – but roaming completely free in its natural habitat. The thought is thrilling.

I feel confident given the afternoon’s penguin encounter, not to mention the abundance of other birdlife. The cheerful song of bellbird, North Island robin, hihi and kākāriki pierced the air before dusk.

Under the silvery blue glimmer of a half crescent moon, we tiptoe in single file through the bush. Moths flicker in the glow of the red torchlight like ignited embers expelled from a bonfire. The kiwi population is thriving here. Numbers are now at around 1,400 from an original five pairs introduced to the island back in the 1900s.

Our guide scans the torch over the bush-laden track in half circles; a special kind of red light is used, so as to not startle kiwi and other wildlife. My heartrate rises every time we’re stopped in our tracks; listening intently for giveaway signs like snuffles a kiwi makes from its nostrils at the end of its beak as it blows leaf litter looking for grubs and spiders to eat, or the heavy stomps as it travels through the bush at surprisingly fast speeds.

To the left comes a loud rustle. Then, a ball of brown fuzz bounds along the path in front of us before scurrying up a hill and disappearing into inky darkness. It was all over in a matter of seconds, confirming the fact that kiwi cover ground incredibly quickly. But there was no mistaking what we had just witnessed and despite it being dark, I had no doubt that everyone was smiling.

We decide to press ahead, to try our luck once more. Soon enough, the torchlight pauses on a patch of undergrowth: more rustling.

Another ball of feathers appears, this time, more sheepishly. I quietly lower myself onto my hands and knees to come face to face with our national icon.

New Zealand native birds are protected at many sanctuaries around the country:

• Tiritiri Matangi Island in the Hauraki Gulf is open to the public for day visits.
• Maungatautari or Sanctuary Mountain in the Waikato is a fully-fenced, predator-free inland island with accessible walking tracks.
• Orokonui Ecosanctuary near Waitati, Otago is home to a biodiversity project where native plants and wildlife are protected from predators. Visitors can see South Island kākā, bellbirds, skinks and much more.
• Ulva Island, off Stewart Island, is an iconic Department of Conservation bird sanctuary, open to the public.
• Stewart Island itself is home to a healthy kiwi population. Late evening tours provide the opportunity to see kiwi in the wild, on a remote beach.