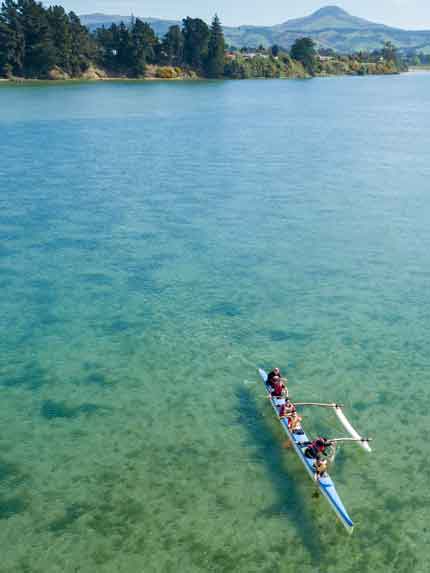 Culture and history can really come alive with local guides

Every tourist who paddles up Waikouaiti River is helping to fund youth programmes as well as an ambitious reforestation plan.

The waka club behind Karitāne Māori Tours, half an hour’s drive north of Dunedin, established the company to subsidise the work they are doing with at-risk youth and cash-starved community groups. Along the way, they also ensure every paddler pokes a native plant in the soil.

The latter initiative is part of a 200-year, iwi-led plan to restore harakeke, toitoi, ake ake and even tōtara to Ōhinepouwera Spit. This narrow strip of land separates the river from the Pacific Ocean and sits at the heart of their tourism business, which showcases local stories from either an outrigger or double-hulled waka.

“These one or two square kilometres are packed full of Māori and European history and that mix of histories is fascinating,” tour company manager Alex Whitaker says.

Visitors travel upriver to an ancient waka landing site and also view remnants of an old whaling station, which reveals its secrets as the tides change and sand shifts. “Just recently we found two jaw bones from southern right whales. And back in the whaling days, there was a pub on Ōhinepouwera called The London Restaurant. You can still find broken bottle bases from those days, the thick green ones.”

Guides point out little neck clams and demonstrate the way seaweed was traditionally utilised to preserve tītī (mutton bird).  People who opt for a land-based tour follow a clifftop trail to learn a little about the southern dialect and the tale of a pā site that was successfully defended during a six-month siege. Sometimes, small pods of rare Hector’s dolphins are visible off the coast, along with seals, albatross, godwits and occasionally penguins.

“In mating season, it’s where the sea lions meet and greet and fight. You have to be quite careful at certain times of year. The males are huge!” Alex, who is also a wood carver and educator, says volunteers from the local Hautururuku ki Puketeraki waka club have been providing tours to schools, university students and other groups for almost a decade.

Now, thanks to the tourism venture that started last year, they can be properly compensated for their time. And profits from paying customers fund the lessons that help reconnect Māori youth with the ocean and their own culture.

“Our kaupapa is to make waka available to as many people as possible. When we take these young people out on the water, we see the spark in their eyes. We see kids who are really reluctant to engage; after a couple of hours they’ll be wanting to steer the waka and come back and do more.”

Some weeks, guides might paddle or sail with 150 young people. Sometimes, they host environmental groups and international visitors. Regardless, everyone plants something. Kati Huirapa has developed its own nursery and already planted tens of thousands of shrubs and trees.

The planting programme aims to undo 200 years of degradation and restore the natural landscape; Alex hopes recently-sown tōtara will be used by future generations, to build waka of their own. In the meantime, he says the tour venture is working well and demand is good. “We just love being out on the water, it’s who we are, and when you’re happy being on the water, you can’t help but pass that on to other people.

“It’s a way of learning about the culture of the area in an everyday kind of way; the looking after the environment and our connectedness to the environment.”

Culture comes alive in other parts of New Zealand, too. Get some insight from people who know the history of their worlds:

• Waitangi – visit the site of the Treaty of Waitangi and join a tour for a genuinely fascinating experience. To fully appreciate the significance of the site, the historic homestead, meeting house, waka and other taonga, take up a guide; their insight will reveal more than if you visit independently.

• Rotorua – famous for its Māori cultural tourism initiatives, this city gets it right. You might be one of only a few New Zealanders being welcomed onto a marae, watching a haka, being taught a waiata or sharing hāngī food – and it will make you proud. It will also shine new light on New Zealand culture, even if you’re already familiar with it.

Reported by Sue Hoffart for our issue