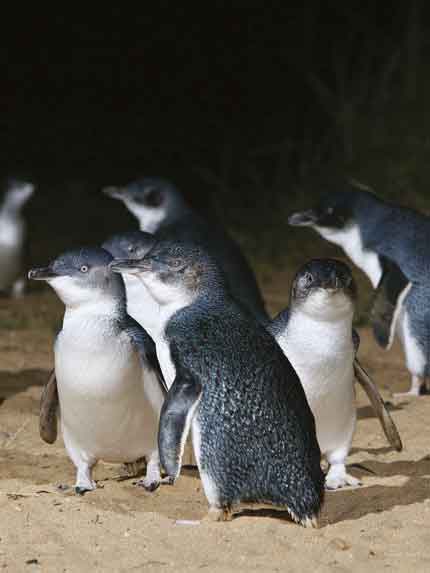 International rock star Ed Sheeran may know how to deliver a catchy tune but he still has a bit to learn about penguin feeding.

“He wasn’t very good at it,” Otago penguinologist Dr Hiltrun Ratz says of the famous musician’s fish flinging attempts during his sell-out concert tour of New Zealand. “But then, most people aren’t.

“You have to work with the birds and hold the fish near the head, not the tail. Don’t just dangle it in front of the beak, you have to open the beak and put the fish in. People find it quite tricky.”

Following the private tour by Ed Sheeran and his entourage, Blue Penguins Pukekura has started offering mere mortals a version of the rock star experience. The everyday tourism operation, where visitors watch the birds return to their nests after a day’s fishing at sea, directly funds penguin conservation work and habitat restoration.

Since the venture’s inception in 2012, tourism dollars have helped pay for more than 300 wooden nesting boxes and funded revegetation and essential pest control work as well as ongoing monitoring of the birds’ welfare.

Now, visitors to the Pilot’s Beach colony can also buy an exclusive, three-hour tour, where they undertake conservation work alongside Hiltrun on a small beach on Otago Peninsula. It is, she says, the only place in the world where the public become hands-on kaitiaki, guardians, to help care for penguins in the wild.

Depending on the season, paying guests may spend several hours checking the birds’ transponders, assist with weighing or microchipping the 500-plus winged residents, build or repair wooden nesting boxes and help with habitat restoration or beach clean-ups.

These private eco-tourists may even find themselves with a fist full of salmon smelt.Because sometimes, things go awry for the world’s smallest penguin.

Bad weather can mean poor fishing conditions for penguin fathers, forcing hungry penguin mothers to abandon their nests. So Hiltrun and her team have been lending a hand.

While it’s tough to save eggs or really tiny chicks, a young penguin weighing more than 200g can be fed by hand.

How do you do it? “Very carefully; they bite.” Last season, the resident scientist handed out 1,086 once-daily meals to 64 hungry fledglings who collectively devoured 237 kg of Marlborough salmon smelt. That regime – feeding as many as 35 birds in a day over a five month period – ensured the survival of all but one orphaned bird.

“Everything we do is driven by kaitiakitanga, guardianship,” she says. “I was taught by the Māori landowners that you don’t let members of your whanau starve.”

With luck, errant parents may return to the nest and resume their role but, if not, Hiltrun nourishes her charges until they are large enough to forage for themselves. Just occasionally, though, a few smart young birds refuse to follow the rules. Earlier this year, she had three overstayers.

“One day, I was at the car, getting more food. I saw something and realised it was a penguin, walking down the road towards me! They’re nocturnally active on land so they don’t tend to walk around in daylight. But he was marching down the road, he was on a mission.

“You can’t just load them up and take them off and raise them in the backyard because they will get too used to people and not leave. You want them to stay wild. You have to feed them in the colony, in the box or burrow where they hatched; hearing other penguins around them and coming out to socialise with them.”

Despite restricting human contact to only three or four minutes a day, another of her wayward orphans would consistently listen for her arrival, then ignore his nocturnal instincts to leave his nesting box and run downhill towards her. This particular animal would greedily gobble up to 73 fish directly out of her hand.

The German-born zoologist has since spent most of the last 25 years working with Otago’s penguins. She is yet to find anyone, including Ed Sheeran, who is immune to the seabirds’ charm.

“His was like everybody’s reaction, he was delighted. I think it’s because they look kind of like weird little people because they walk upright on two legs.

“Penguins are such adorable creatures, as long as you don’t have to touch them…”

What should you look for in an income protection policy?