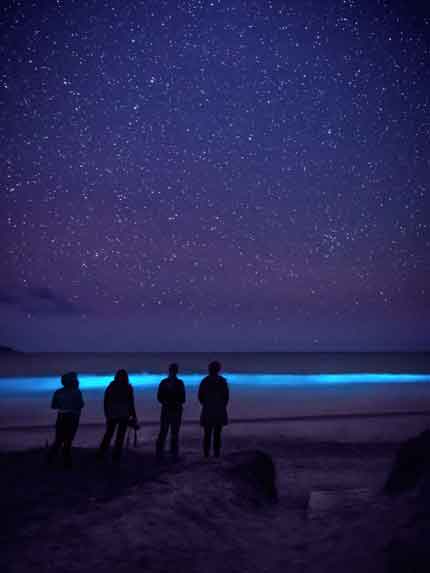 Spending time with an expert may reveal more than you expect

When you learn that the universe contains billions of galaxies and that each galaxy contains millions and in some cases billions of stars, it’s enough to make your brain explode.

In an attempt to come to grips with the vastness of space, and to focus on a more manageable slice of the night sky, I decided to take a tour of the stars with a visit to Aotea, Great Barrier Island, on the edge of the Hauraki Gulf.

With no reticulated power, New Zealand’s sixth largest island is off-grid which means there’s barely any light pollution and the stargazing is out of this world. In 2017 the island was granted official, internationally-recognised Dark Sky Status.

One of several companies seizing on the tourism potential of that development is Good Heavens, whose Dark Sky Ambassadors run tours on beaches and at baches.

Meeting up at Medlands Beach, a group of us made ourselves cosy, sitting in a circle of moon-chairs arranged on the sand. We were given blankets, hot water bottles and cups of hot chocolate. I’d have been quite happy simply sitting and sipping my cocoa, listening to the sea on the shore but, when our host Deborah switched on her laser pointer and directed it at the heavens, we were mesmerised by the glittering starscape.

Originally from Kerikeri, Deborah has lived in a lot of spots with heavy light pollution, including Auckland, Sydney and London, so when she and her husband started their family, they wanted their kids to grow up somewhere they could see stars, which led them to Great Barrier Island.

As Deborah shared her astronomical knowledge, describing the solar system in terms we could all understand, she simultaneously pointed her powerful 8-inch Newtonian telescope at various clusters of light.

The first object Deborah pointed her telescope at was Jupiter; we all caught a glimpse of it before it set in the west. Then she took aim at Saturn, with rings and a single moon clearly evident. Next the magic of Mars was in our sights before we turned our attention to stars.

Using the laser, Deborah pointed out astrological constellations; although you really have to use a big dollop of imagination to see a scorpion, or to think Sagittarius looks like an archer.

I especially enjoyed knowing I was looking at objects that were billions of years old, from the ancient globular cluster known, boringly, as M4 – to the fabulously evocative Ptolemy’s Cluster and the Jewel Box.

It can feel pretty intense when you think about the scale of the universe. After each peek through the telescope, I’d retire to my comfy chair and snuggle under my blanket to embrace my hottie, not sure which was keeping the other warm. But I loved having my head filled with stellar details and being given some clues about the enormous, infinite heavens above.

Reported by Elisabeth Easther for our AA Directions Spring 2020 issue