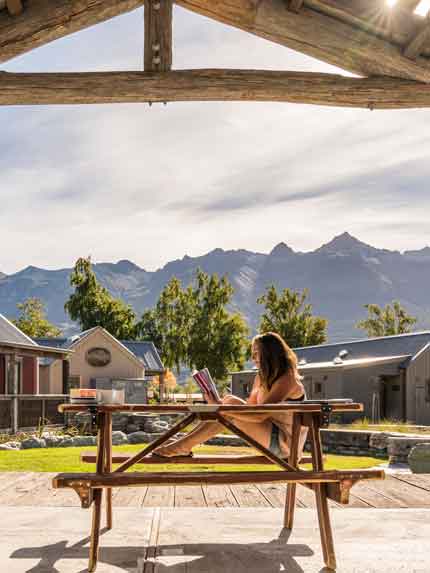 Staying somewhere special can open your eyes to new possibilities

A single night’s stay at Camp Glenorchy touched Jane Patterson and Mick Grantham’s lives in a host of unexpected ways.

The ecological retreat influenced the design of the home they are building in rural South Auckland, ramped up their environmental awareness and even provided employment for one family member.

“We couldn’t stop talking about it,” Jane says of her visit to the sustainably designed and run complex at the head of Lake Wakatipu.

“My daughter Ailsa’s an engineer and she heard me talking about it. She ended up working there, as their engineer. That’s life changing.”

The couple checked in to a bunkroom with Mick’s son Jack, now 13, the night before they walked the Routeburn Track last year.

“I didn’t quite know what we were actually going to and then it was ‘wow, this is so cool’. It’s just so impressive.”

Jane, who is a science teacher, had previously visited the area, a scenic 45-minute lakeside drive northwest of Queenstown. She already knew that the township of Glenorchy, population 350 or so, was a charmer. What the Patterson-Grantham trio found at Camp Glenorchy, though, was vastly different from the run-down campground she recalled.

In its place are luxuriously-outfitted but still rustic cabins alongside bunk huts, meeting rooms, a communal kitchen and powered motorhome sites, with energy provided by the South Island’s largest solar farm. The 56-bed complex is on track to generate more energy than it uses this year, courtesy of those solar panels and smart design factors such as triple glazing and high-tech heating, lighting and monitoring systems.

The developers – American philanthropists Paul and Debbi Brainerd – have cleverly turned sustainability into a competitive sport; guests can use their in-room tablet computer to adjust their cabin’s water and electricity use and see how their conservation efforts stack up against fellow guests. The tablet is also loaded with information about the camp’s vast array of sustainability practices, which include utilising odour-free composting toilets – the compost goes to the garden – and capturing rainwater then using treated wastewater for garden irrigation.

Mick, who works in construction management, was impressed with the way various sized pieces of recycled timber were salvaged from local buildings and Christchurch quake demolition sites and used as feature walls, like a wooden mosaic. “Everything tells a story, it’s a work of art,” he says, vowing to copy some of their methods in the house plans he is drawing up now.

When the family toured the property during their stay, Mick quizzed the manager about building methods and took plenty of snapshots.

Jack was captivated by the use of technology and is still talking about the way their bunkroom’s communal showers operated, using swipe cards and timers.

Mick says everything he learned on that trip reinforced his own drive to create a sustainably-focussed home and proved it could be done in a stylish way.

“It was really good to see something sustainable done on a commercial scale. I was impressed with the level of detail on and inside the buildings and the energy-efficient way it was running. It didn’t lack anything. It showed me you can have your cake and eat it and not ruin the planet.”

Some aspects of the retreat’s lofty goals are less visible, like the fact it gives all profits to the town’s charitable trust. This money – more than $30,000 by the end of this year – is used to fund community projects, help the local school and provide scholarships and grants.

And this is no gated, guest-only enclave. Glenorchy residents are encouraged to drop in, ask questions and to tour their own friends through the property. Community meetings and movie nights are often hosted by the retreat and locals join camp guests at regular koha-paid yoga classes or occasional burlesque dancing lessons and public talks.

In September, the Ministry for the Environment announced it would team with Camp Glenorchy to help pay for a commercial composting facility that could be utilised by local people.

Naturally, educationalist Jane Patterson sees plenty of teaching possibilities, too. In the classroom, she will be talking about the retreat’s technological approach to sustainable, greener living and encouraging students to investigate further.

“You can take your family and show your children the potential, what can be done,” she says.

• Book into Solscape in Raglan for yoga classes, surf lessons, workshops in permaculture and sustainability and various wellness therapies.
• Stay at Kauri Coast Top 10 Holiday Park north of Dargaville and join an after-dark guided tour through nearby Trounson Kauri Park forest.
• Sign up for a two-day art workshop with Art Break in Waihī, Coromandel.
• Book time in Wellington during the bi-annual New Zealand Festival (in February/March on even-numbered years), for extraordinary experiences of international quality.
• Head to New Plymouth during WOMAD and have your eyes and mind opened to new music, art and cultures. This family-friendly festival provides a great introduction for children to the differences and diversity in the world.