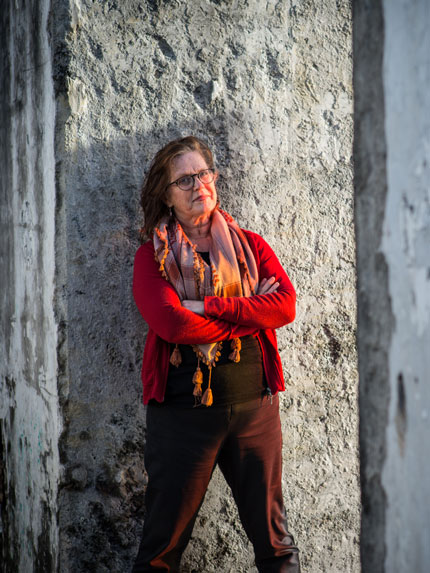 Young refugees often have a raft of emotions locked up inside them upon arriving in a country they’re navigating as their new home.

Feelings of confusion and isolation are often emphasised by language and cultural barriers.

The key for some is in the hands of Wendy Preston, creative producer and director of Mixit, an Auckland community arts project that uses creativity to support and empower refugee and migrant youth.

“There’s a real sense of belonging here. It’s a non-judgemental space open to all ethnicities and faiths and it becomes their second family. This is something they feel they belong to. Mixit changes everybody’s lives,” Wendy says.

Mixit was established in 2005 after Wendy, who has an extensive background in dance, was shoulder- tapped by the Fledgling Trust founder, Charmaine Barnett, to do some research. The philanthropist, who supports marginalised adolescents, was curious about the current environment for migrant and refugee youth, and recognised the power of creativity and performing arts. What followed was Wendy immersing herself in six months of full-time investigation.

“I had never thought about the refugee world before. I was interested to know what support was available in New Zealand for young refugees; for youth who often feel neither here or there, who are lost.”

Her studies included picking the brains of psychologists and teachers and approaching hospitals, non-government organisations and community groups. Wendy made a startling discovery: “There was very little for our young refugees.”

“Yes, there were English as a Second Language (ESOL) classes offered in schools which provide upfront support in the first year, but after that they were left to their own devices and were really slipping through the cracks,” she says.

It was an obvious decision to form Mixit, but it needed to be executed with care and consideration.

“One of the key findings in my research was that people didn’t have stability in their lives. I knew once we started, we had to be there for the long haul.”

Twelve years on, Mixit’s doors remain open at West Auckland’s Corban Estate Arts Centre for creative workshops every Saturday: rain, hail or shine. There’s no cost or need to sign up; youth aged between 13 and 20-plus simply turn up on the day. It relies on lottery grants and donations to keep it going.

There’s drama, hip hop dancing, music mixing, graffiti art, aerial acrobatics, food, board games, chat, and lots of laughter to be had during the workshops. The summer performance is where her Mixers, as Wendy affectionately calls them, take to a public stage to showcase a routine they’ve worked on. All creative expression is overseen by a professional artist or choreographer with a migrant background themselves. The Mixit Youth Leadership Programme allows young refugees the chance to be involved in the planning and decision-making of events.

“It’s a gift to witness youth find themselves,” Wendy says. “We are here to give young people a voice and to ignite fires within. It’s about honouring their growth, journey and self-discovery and giving a platform for them to navigate their way between their two worlds, the old and the new.”

“We are all humans and we engage as a human race, rather than as a Muslim, an Israeli or a Palestinian. It’s pretty cool to see everyone hanging out, singing, dancing and playing the drums together when in some parts of the world there is war. We leave all that background at the door.”

Reported by Monica Tischler for our AA Directions winter 2017 issue