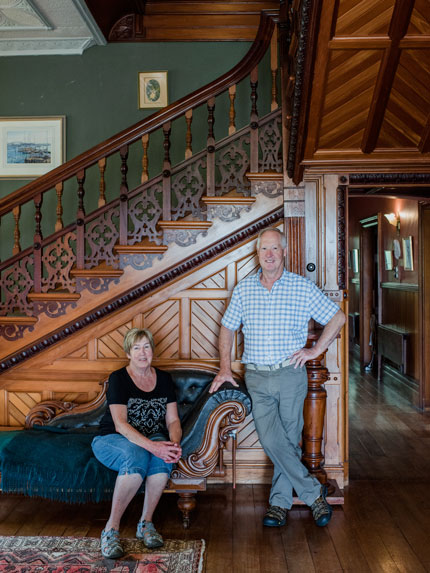 Peter and Dianne Harris in their restored treasure

A home with history

In 2000, while on holiday at his sister’s house in Hawke’s Bay, Peter Harris was trying to light a fire.

“I was having trouble getting it going and I pulled out a chunk of smouldering newspaper. The page just happened to have an article about this enormous old homestead which was due to be demolished in ten days’ time.” Peter put out the fire and read the story.

Oruawharo, in Tākapau, is one of the largest private homes ever to be built in New Zealand, with 13 bedrooms, three staircases and two kitchens spread over 1,038sqm. Built in 1879 for Sydney Johnston and his bride, Sophia Lambert, the homestead was cherished by multiple generations until a family tragedy lead to it being abandoned for 30 years.

“We went to have a look at it,” Peter says. “You can imagine what the place was like – no lawns cut, overgrown hedges. We fought our way up the driveway but within less than a minute we decided that there’s no way this place should be demolished. So we did what any right-minded Aucklander would do: we bought the bastard.”

When Peter and his wife Dianne first took the keys to Oruawharo nothing worked. “There was no electricity because the wooden power poles were rotten and the power had been disconnected years before. That also meant there was no water. The house was chockablock full of possums and rats and mice and birds and vegetation.”

Over 19 years, the Harrises have restored the grand old homestead. Today, while being Peter and Dianne’s permanent home, Oruawharo is also a business, hosting weddings, functions and high teas.

“The house is big enough for us to escape, even when there are lots of people here,” Peter says. “We don’t have our own separate space and we’re quite at ease with that.”

Despite the scale of the project they’ve undertaken, Peter says they don’t find it daunting. “We try not to get worried about things. It’s all just part of living an interesting life. We wake up in the morning and think how lucky we are. We’ve created something of significant value which will last a long time. And we’ve saved it, that was our aim.”

Reported by Jo Percival for our AA Directions Autumn 2020 issue

Fun in a Fiat