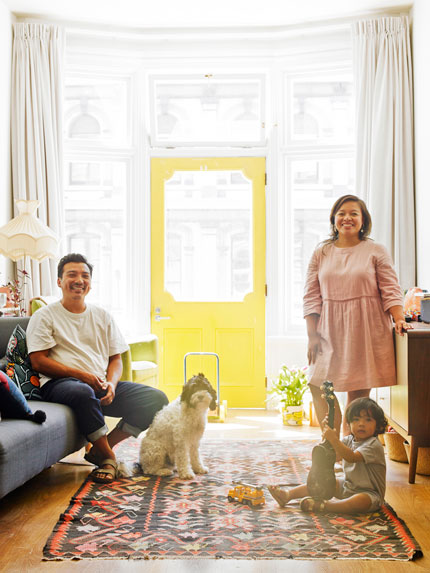 Ana, Rob, Aro and Chester Barbono in their apartment

At home in the city

Colombia Apartments in Wellington’s iconic Cuba Street started life in the early 1900s as one of the city’s first brothels, morphed into a more respectable boarding house and, sometime around the middle of last century, was carved up into private dwellings.

The five-storey building is now home to 20 apartments, including the one owned by Ana Barbono, a former lawyer/political adviser and her husband Rob, a business consultant.

Ana admits the 90sqm apartment is a little small for the couple, their two-year-old son Aro and Chester the dog, but she wouldn’t live anywhere else.

“Even though we’re in the middle of the city, this end of Cuba Street is relatively quiet and it’s a lovely community – like an extended family,” Ana says.

“All the retailers know us and it’s a short walk to Oriental Bay or the Town Belt; the library is across the road and the city’s cafés and attractions are on our doorstep.”

The couple has lived in three different apartments in this building over the past eight years. When this one came up for sale in 2013, they jumped at the chance to make it their first home.

The couple laid laminate flooring, doused the walls with white paint and downsized their possessions to fit the compact space.

While the upside of having such a small home is how easy it is to clean, the downside is a lack of storage; the couple had to get creative, including Rob spending hours researching and installing pull-out bins in the laundry.

“When you have a small house, everything has to have its place, which makes you focus on the things that are important to you.”

There’s a belief in some circles that inner-city apartments and kids don’t mix but the couple say they have no plans to move.

“The demographics of the building and this part of Cuba Street have changed with us, because when we first moved here it was all young couples and single people renting. But now there are other families and retired people who’ve bought apartments, so it’s like having an extended family. It might not be everyone’s cup of tea, but this set up and location works really well for us.”

Reported by Sharon Stephenson for our issue

Kathryn Webster takes a fresh look at a familiar city – as a tourist for a...