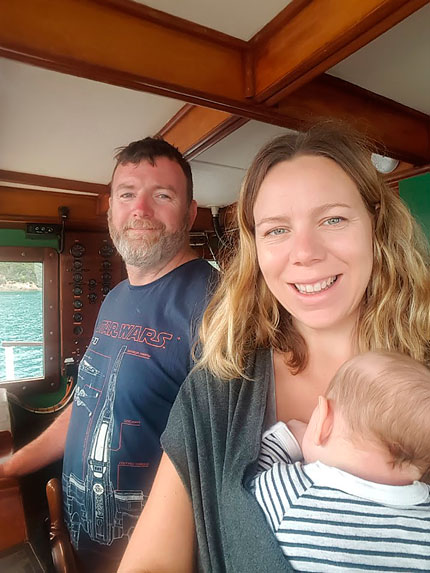 Louise Gavin and Keith Nolan on their house boat

At home on the waves

It wasn’t in the grand plan for Louise Gavin and Keith Nolan to buy a houseboat.

They’d been saving the deposit for a house when Keith, looking to upgrade their fizz boat to something they could spend weekends on, spotted a four-bedroom launch on the market for little more than a house deposit. The adventurous couple couldn’t resist.

“People thought we were mad,” laughs engineer Louise. “I didn’t even know the bow from the stern. Besides that, we had no experience of boats that size and it needed heaps of work, inside and out. It was a steep learning curve.”

Friends helped with their renovations and their new neighbours at Nelson Marina quite literally showed them the ropes, preparing them for life aboard. “It’s surprising how many other people were living on boats at the marina. There was a real community feel.”

Within months they’d turned their 18.5m-long, two-storey vessel into a bright and airy home. “Our bedroom, with an en-suite, was bigger than any we’d had when we’d rented houses,” Louise says.

The only thing missing was a garden, though the couple made good use of the two decks for entertaining – installing a BBQ on one, as well as a ‘veggie patch’ of salad and herb pots.

By the end of their first year aboard, the couple were welcoming baby Rian into their lives, with fresh carpet laid just in time for his arrival.

“Plenty of other families lived on boats in the marina with children,” Louise adds. “One neighbour lent us a baby lifejacket – they seem to circulate among the residents.”

The pair also decorated one of the spare rooms to become the nursery. Then, to make the most of their parental leave they headed to the Abel Tasman coastline. “I’d had a caesarean and couldn’t go anywhere, so it was perfect and quite magical. One day there were even dolphins swimming nearby.”

Louise and Keith, an aquaculture technician, regularly ended up training their camera lens not just on their new arrival, but also on wildlife, with a particularly memorable trip featuring two orca calves playing in their wake.

Once back at work, the couple continued to enjoy the mobility of their home by heading off for weekends, with Keith – who last year gained his skipper’s certificate – at the helm, while Louise organised en-route. “For many of our trips I’d get the house sorted while we'd be heading out – making dinner, vacuuming and changing sheets, so that all we’d need to do when we arrived was relax!”

The pair, who recently sold their house boat to return to Ireland after 12 years in New Zealand, are now discussing options for living aboard a vessel overseas.