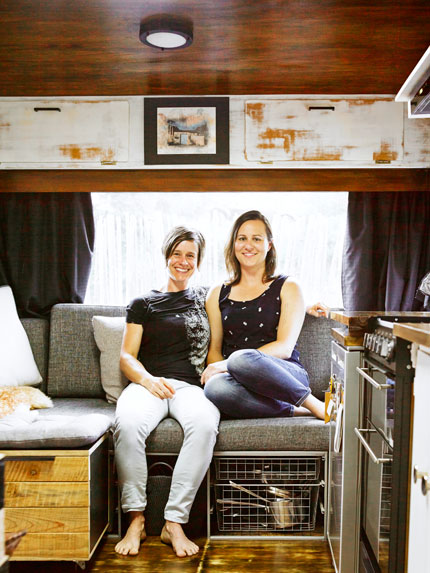 Bree Graczyk and Marisa Schuler in their cosy caravan

If you’d told Bree seven years ago she’d be living in a caravan in the hills high above Wellington’s south coast, she would have laughed at you.

Back then she was finishing her social work degree in Minnesota and thinking about building a mobile home to drive around the US. But in 2014, the programme advisor got the travel bug and came to New Zealand. Three months later, she met partner Marisa, originally from Switzerland, who moved here in 2007.

The pair shares many things, including a love of sustainable living and tiny houses. They spent a year researching mobile, off-the-grid small homes, pooled their savings and approached three banks for finance.

All refused to fund anything less than 40sqm that wasn’t tethered to foundations.

“So we started looking at other options such as house trucks, caravans and campervans,” says Marisa, who owns her own landscaping business.

That led them to Whanganui and Gwen – a 1968 Oxford Deluxe caravan.

“The interior had been decorated in a retro/vintage style that wasn’t really us,” Bree says. “But we knew we could turn her into a cosy home that reflected our style.”

Both Bree and Marisa love to cook, so the first thing they did was rip out the dated kitchen, installing an extended wooden bench top, gas oven and fridge. They also added a modern shower, painted the walls and stained the ceiling darker, doing most of the work themselves.

Not surprisingly, they also had to radically downsize their possessions, giving away bags of clothing, shoes and books.

Having lived in Gwen for almost a year now, the pair say the first home either of them has ever owned has exceeded their expectations. “We’re really proud of the hard work that went into creating it. So even if the table is a bit wobbly or something is slightly lopsided, it doesn’t matter because we did it ourselves,” Marisa says.

“We love coming home to Gwen each day. We’re really happy this is our home.”

Reported by Sharon Stephenson for our AA Directions Autumn 2020 issue

Road report: The impact Covid-19 had on motoring in New Zealand

When the clock struck 11.59pm on March 25, New Zealand’s transport system hit the brakes in...