The best farm worker out

A devoted dog and his master round up a flock of sheep on a grassy plane framed by lofty trees and undulating pastures.

While it’s a scene reflective of quintessential rural New Zealand and echoes the realities of a day’s labour on a working farm, it’s actually part of the Sheep and Dog Show at Sheepworld, north of Auckland.

Crowds of enthusiastic onlookers watch as Mac the sheepdog and farm manager John Green work together in perfectly orchestrated harmony. Almost like a choreographed performance, the pair move several sheep from a nearby paddock into a barn. 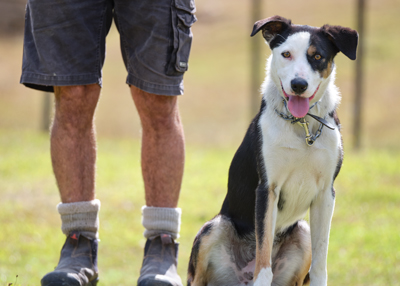 “We could not do this job without the dogs,” John says as his audience take seats inside the barn. “They are the best farm workers we’ll ever have.”

John demonstrates the skill and precision of drafting and shearing sheep, and gives fascinating insight into how New Zealand sheep are farmed and how their wool is harvested. The natural resource is transformed into everything from housing insulation and carpet to more surprising products, like surfboards and even cat food (lanolin oil in the wool is a source of protein).

But it’s the dogs who are the real stars of the show. Mac, an 11-month-old border collie mixed with greyhound and whippet was bred to be fast, while others, like Gris the huntaway, are loud with a strong bark; each sheepdog bringing vital qualities and skills to the farm.

“Mac is one out of the box,” John says of the dog who at four months old was doing what most canines would learn in a year. “He’s a natural. You wait a long time for a dog like Mac; they don’t come around very often.”

The iridescent white sand coastline of Te Arai is a treasure.

In charge of what must surely be the country’s most exciting cultural project is Kathleen Drumm,...