The cream on top

Growing up on his family’s Waikato dairy farm near the Kaimāī Ranges, Ben Troughton didn’t expect to become an award-winning dessert manufacturer.

It was soil that initially interested him; he was cultivating, planting and fostering seedlings even before starting primary school. By his early 20s, the farm boy had established a small organic vegetable business in a corner of the property that his Irish grandfather Vic broke in almost a century ago.

There was no escaping the milking shed for this third generation farmer, however. He spent plenty of years placing cups on cows before becoming Matamata’s chief gelato maker.

These days, his town-raised wife Sarah takes care of their Jersey herd, with help from the couple’s three teenage daughters, and Ben tends to the animals’ famously creamy product. Last year, four of his frozen creations collected silver medals at the annual New Zealand Ice Cream Awards, including one made with damson plums harvested from a tree his grandfather planted.

“Really, everyone in the family does a bit of everything,” Ben says. “Our eldest, Emma, does a lot of tractor work on the farm and she takes promotional photos for the gelato business, and all three girls can milk 500 cows pretty much solo. Holly helps out in our food truck and Lucy works after school and weekends in our new parlour in town, which is also where I make the gelato.”

Ben tackles maintenance work on the 200ha home farm and also cares for the thousands of specimen trees and native plants he and his father Terry have planted. 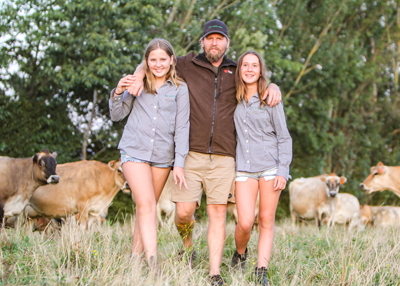 “As for Sarah, I don’t know where she gets her energy. She’ll get up at 4am, milk the cows, do a bit of farm work, grab breakfast and a shower, then work all day in the creamery shop and get home at 7pm. Then she’ll take the truck to scoop gelato at an event at the weekend. She’s pretty amazing.”

The farmers joined forces with marketing and graphic design duo Alice Ewen and Adam Barton – all four were at Matamata College together – in the Kowhai Creamery business that makes creamy, Italian-style gelato from the Troughton’s milk. Their parlour, on the southern outskirts of Matamata, is en route to the movie set tourist attraction that put the town on the map back in 2002.

“In a lot of ways, it was the Hobbiton effect that gave us confidence to open the shop. Matamata locals have been our biggest supporters but we certainly hope to tap into the town’s tourism boom. We’ve seen a lot of businesses spring up or expand because of the huge number of visitors coming to what was a pretty traditional farming town when I was growing up here.”

Ben has never been afraid to question tradition. The second-youngest in a family of six, it was he who railed against artificial fertilisers and harmful pesticide usage at a time when ‘organic’ was synonymous with ‘a bit weird’ in his social circle. He implemented recycling for plastic sileage wrap and convinced his parents to plant more diverse pasture and reduce herd numbers by almost a third, to 500.

“It hasn’t been all one way, though” Ben says. “My parents still live on the farm and Dad has huge knowledge about this piece of land, which is owned by a family trust. He was the one who started planting trees rather than just grass so now we have food for bees, shelter for cows and a lot more biodiversity and beauty than your average dairy farm. He actually loves to kick around new ideas and to be fair, not all my ideas have been great ones.

“My mum is surely the best recycler in our family and always has a fantastic vegetable garden, made with heaps of organic compost. And she was making her own yoghurt and brown bread decades before they became fashionable. It probably goes without saying, but we can learn plenty from previous generations.”

Ben’s interest in soil continues, too. Since 2011, he has been working with Waikato University to research, trial and study pasture varieties. The lead scientist claims the Troughton property is one of the most monitored farms in the world in relation to greenhouse gases.

“That means healthy cows, fertile soil and bloody great gelato,” Ben says. “For dairy farmers, this kind of diversification makes a lot of economic and environmental sense and I really think tourism has so much potential for us and for future generations. By adding farm tours and that kind of thing. That’s if we want to keep this farm in the family. People want to know where their food comes from now and we can show them something pretty special here.”

He pauses and laughs. “Of course, I have to get the idea past Mum and Dad first.”

Reported by Sue Hoffart for our AA Directions Autumn 2020 issue