Lockdown was the perfect time to adopt a pet. Fiona Terry meets a Nelson family who found joy in a new kitten.

Ask the Thompson family to share their memories of lockdown and their answers are overwhelmingly positive – and it’s all thanks to a furry addition to their bubble that proved a playful distraction. 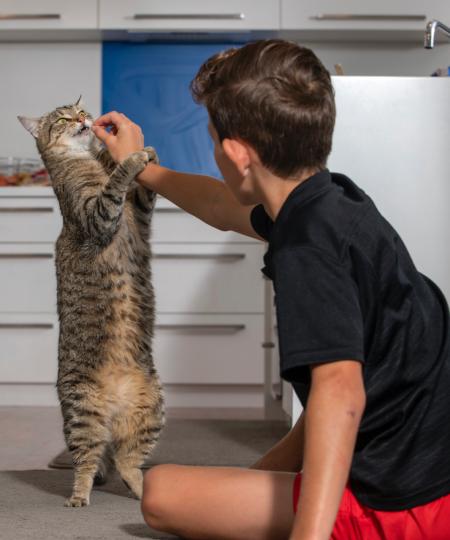 Poppy the cat plays with her new family. Photo by Tim Cuff

Pretty tabby Poppy had been returned to Nelson’s SPCA two weeks into the first round of Level 4 restrictions, back in April 2020. It was by chance that Andrea Thompson heard on the grapevine there were kittens in need of a new home. She and the family had said farewell to their 17 year-old cat just a few years beforehand and a new kitten had tragically been run over.

They’d been reluctant to think of another pet, keen to avoid further heartache. Besides, busy lives for teacher Andrea, supply chain manager Damon, and two active kids – Gemma, now 13, and Cameron, now 10 – meant there’d been little time to settle in another fourlegged friend.

However, with enforced time at home, a rare opportunity presented itself to get to know a new arrival. There was also the hope that the extra attention might encourage a homebody – a cat that would rather snuggle on the couch than cross the dreaded road.

A phone call to the SPCA led to the emailing of a photo of a kitten that the staff assured them was child-friendly and would be a good fit for their family setup.

“I’d been hoping for a fluffy grey male but as soon as we saw the photo of her, we couldn’t resist,” says Andrea. That afternoon, Poppy was delivered to their driveway in a travel crate for a contactless delivery.

“We’d never had a cat before that we hadn’t already met,” adds Andrea. “The SPCA just said she had a nice nature and I trusted their judgement. Since we were fostering her, we also had an ‘out’ if things didn’t work.”

Within just minutes it was clear Poppy – named in honour of the imminent ANZAC Day – felt quite at home. “It was obvious there was no sending her back because she settled instantly and turned out to be exactly what we wanted,” says Andrea, who asked for the adoption papers to be sent that same day.

Family members who lived on the same street had to view her through the window so as not to break bubbles. And Andrea and Damon welcomed the distraction. “It was good for the kids to have something positive to think about when things were so uncertain, and some entertainment that didn’t involve the 1pm briefings,” says Damon.

The kitten featured in class Zoom meetings, slept on the children’s beds, and followed them into the field over the garden fence to play. In Gemma’s school book, published to commemorate the weeks the pupils spent in lockdown, it didn’t come as any surprise to her friends and family that she cited her overall highlight was, of course, Poppy.

Reported by Fiona Terry for our Autumn 2022 issue