Kathryn Webster meets family of artists who made the most of Auckland’s long lockdown by getting creative.

Being creative is what Sara Hughes and partner Gregor Kregar do. They’re both successful, professional artists working full time in studios in or near their Auckland home. 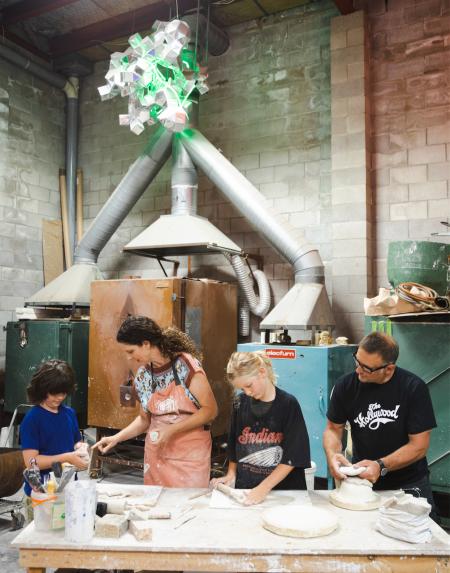 Sara Hughes and Gregor Kregar at work with their boys. Photo by Jessie Casson.

During the lockdowns, that meant they could easily work around having their sons – ten year-old Luka and Niko, aged eight – at home all day, every day. For the boys, it meant access to those wonderful creative spaces.

“Gregor and I both had work to do, but we weren’t trying to do it at the same time. Gregor is an early morning person and I’m better later, so we split the day. I would do the morning shift at home with the boys when I was able to get involved in their schoolwork. Gregor would have them all afternoon until about 7pm and I would have my time to work, too, so that worked well.”

Gregor has a studio about 20 minutes’ walk from their home, which is where the boys went to spend their lockdown afternoons. It was a chance for the children to learn techniques of preparing clay and throwing on the pottery wheel.

It’s the sort of craft that needs practice and, being able to spend time on it, they both got the hang of it. “They really enjoyed the challenge,” Sara says.

They also learned how to make plaster moulds, covering items such as pears and oranges in plaster in two parts and recreating those forms with liquefied clay.

As well as learning about glazing, they experimented with various firing techniques. “We did a raku firing,” Sara says, explaining that this involves removing a hot ceramic from the kiln and rapidly cooling it by rolling it in sawdust so that it oxidises. “It’s a relatively quick process; you can see quickly what’s happened. It’s magical and pretty exciting.”

Both boys are now hooked on ceramics. “It was great to see their creativity coming through and the range of shapes and forms they made. They were really excited about it, really positive. They made more than 100 pieces… and there were no kiln disasters.”

With pressure on both adults to keep working on their projects – Sara on an upcoming exhibition at Sutton Gallery in Melbourne, Gregor on a show at Auckland’s Gow Langsford, and both of them working on public projects – they thoroughly appreciated the fact that their lifestyles readily accommodated the change in their circumstances.

“I totally appreciate that trying to do regular hours with people in the house would have been stressful. We were able to set it up in a way that really worked for us.”

Another element to the lockdown experience that Sara appreciated was the opportunity to be involved more closely in the boys’ schoolwork.

Overall, it was a precious and memorable time in their small, intense bubble. “Hopefully we won’t have more lockdowns but the age the boys are, they still like hanging out with us. We thought – we might not have this opportunity again so let’s make the most of it.”

For more information about the artists, visit sarahughes.co.nz and gregorkregar.com

Reported by Kathryn Webster for our Autumn 2022 issue

Lockdown was the perfect time to adopt a pet. Fiona Terry meets a Nelson family who...