Body language expert Steph Holloway talks to Jo Percival about how best to connect while wearing a face mask.

Masks are going to be part of our day-to-day lives for the foreseeable future. But how do you communicate effectively with people when you can only see half of their face? Body language expert Steph Holloway explains that it’s actually quite easy to read people, once you know what you’re looking for. 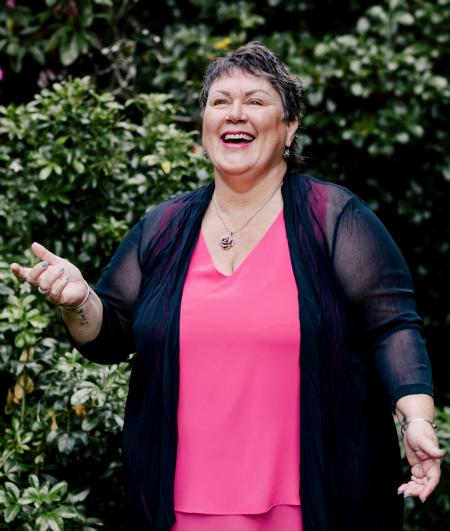 “With some expressions like the contempt lip or showing disgust, you can’t see that under a mask, so instead you would need to look at the eyes and the bigger body language,” Steph explains. “From the mask up to the forehead you will still see other expressions like anger because that comes down in the middle of the forehead. You can still see surprise; eyebrows going up. You might see if someone is being a bit dismissive if they do the ‘Beyonce head wobble.’”

Being able to tell if someone is smiling with a mask on can also be challenging. There are two ways of smiling, Steph says. “There’s a Duchenne smile, which moves the cheeks up. People who smile in that way tend to get lovely crow’s feet which go right up to the middle of their eye socket. People who are wide-mouth smilers get lines down the side of their mouth; you wouldn’t be able to tell if a wide-mouth smiler was smiling at you with a mask on.

“But in New Zealand we also do the‘East Coast wave’ aka the ‘Kiwi chin up’ which can mean about 12 or 13 different things,” Steph laughs.

Another thing that can be more difficult to pick up with a mask on are manipulators. “Manipulator signals are when you touch your own head, face or hair. The average human does this at least 200 times a day.

“Every time somebody says or gestures to you there’s a cause and effect. People will touch their chin if they’re thinking about what you’ve said. They might put a finger over their mouth if they have something to say but don’t know whether to say it or not. They might pinch the bridge of their nose if they disagree. They might cover or scratch their ear if they want you to stop talking or don’t want to hear what you’re saying. Touching the forehead is about minor irritations by the temples with stress escalating the closer someone touches to the middle.”

But even if these kinds of small gestures are curtailed by a face mask, there are many other layers to communication. Steph says that if you can see a person’s whole body, there are lots of signs and signals you can pick up.

“There’s so much you can read with a mask on, you just need to know what you’re looking for. For a body language expert like me, facial expressions are almost a last resort. Your whole body tells a much better picture.” If you want to communicate better while wearing a mask it’s important to use more directional body language, which is when you use your hands to really emphasise what you’re saying. “If you needed someone to back off or give you more space, you wouldn’t just say ‘can you give me more space please,’ while keeping your hands at your sides,” Steph explains. “It’s likely your hands would come up with your palms showing. Whenever you see palms it means ‘slow down,’ or ‘back off.’ And the more urgent it is, the further your hands would be from your body.”

Directional body language also describes when you use your hands to gesture, which could be indicating to the person you're talking to, an object, or giving a direction. And people will use emblems when no speech is used at all. This could be a thumbs up, an ‘OK’ sign, or a ‘call me’ signal.

“You can still tell, with all of these things, what people are trying to communicate even if they’re wearing a mask.

“The best advice I can give to anyone wanting to understand body language is to watch people,” Steph says. “It’s not just about the science and facts of body language; you need to love that observation phase of human interaction rather than just waiting for your turn to talk. And rather than just listening, you also need to add in observation to see the cause and effect of what’s happening.

“The more attention you pay, the richer your interactions with other people will become.”

Lockdown was the perfect time to adopt a pet. Fiona Terry meets a Nelson family who...