Sharon Stephenson meets a family who discovered the benefits of gardening during the pandemic.

Becoming a gardener was never Laura McIntyre's plan A, or even her plan B. 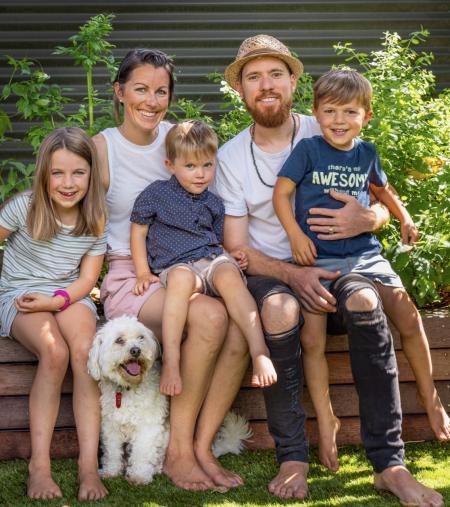 The McIntyre family have developed a love for gardening. Photo by Martin Haughey

Although the Kāpiti Coast resident’s grandmother had a garden that featured in garden tours, and her mother worked at a plant nursery, Laura seemed to have missed out on the green finger gene.

“I wasn’t interested. I’d put a plant in the ground and wonder why it wouldn’t grow,” says Laura who homeschools her three children Millie (7), Grayson (5) and three year-old Henry. But in April 2020, as lockdowns swept through the world and supermarket shelves emptied, Laura and her husband Sam, who previously owned a real estate franchise, worried they were too dependent on others for their food.

“Relying on supermarkets for our food seemed too risky. We wanted to grow as much of our own produce as we could, and at the same time teach our kids where their food comes from.”

Although their Raumati Beach home didn’t have an ample garden, Laura realised she could rip up the 150sqm paved driveway and plant a veggie garden.

The couple were, she admits, “starting from zero knowledge base”. Thankfully a landscaper friend stepped in to guide them through the process.

In came a digger to build up the compacted soil. The couple bought six chickens and many kilos of mulch and organic compost to help with soil creation. Their friend created a planting guide and five months after their initial idea, the couple started planting raised beds.

“The idea was for an edible food forest which included lots of fruit trees with herbs and vegetables underneath. It’s all about companion planting, so trees succession planting. So, for example, when one plum tree stops fruiting the other tree starts. It means that we’re not overwhelmed with produce.”

Their planting included plum, nectarine, feijoa, orange, lemon, pear, apple and guava trees, along with passionfruit and blackberry vines. Underneath, they planted vegetables such as leeks, broccoli, carrots and spinach as well as herbs and edible flowers.

Not surprisingly, the couple is firmly in the organic lane, using no sprays and doing things like scattering crushed egg shells around the garden to prevent snails devouring their crops.

Two years on and their garden is flourishing, so much so that Laura has taught herself how to preserve the bounty. “I now bottle as much produce as possible, as well as giving excess to family and friends.”

A bonus has been getting her husband and children involved in the garden and, she says, they are now as keen as she is to grow their own food.

“The kids enjoy helping out in the garden and we love the fact that we only have to do an online supermarket order once a month for things like cheese and flour.”

Although Covid was a major cause of the pivot, Laura believes her family would have gone down this route eventually. “But we might not have got there for a few more years. Having time in lockdown to worry about our food supply and wonder why we couldn’t provide our own food definitely sped up the process. Our lives are now simpler and more fulfilling and we spend more time together as a family connecting with nature.

“Lockdown made us realise that as humans we spend so much time working to save money to buy things that save us time, when instead we can spend time doing the things we really want.”

Reported by Sharon Stephenson for our Autumn 2022 issue