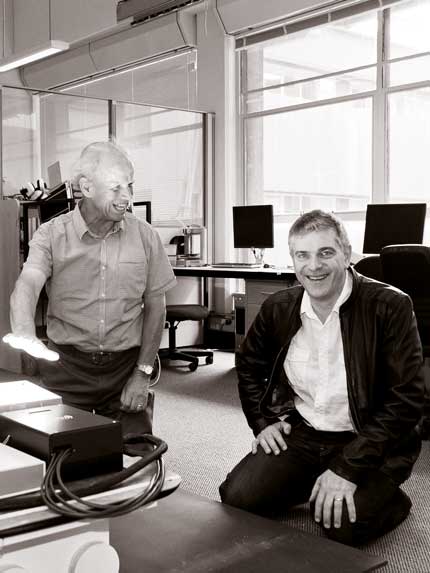 Professors John Boys and Grant Covic are the bright minds behind a clever, practical solution to charging electric vehicles.

What will travelling around New Zealand be like in the future? It’s a question John Boys and Grant Covic feel their invention of wireless electricity helps to answer.

The University of Auckland professors have pioneered inductive power transfer technology, or electricity without wires. The process was stumbled upon in the 1990s and has been used for factory automation, among other applications. In recent years the focus has switched to how it can revolutionise the use of electric vehicles (EVs).

“For many EV owners there’s a worry around range and the question of ‘did I plug it in?’ nags on their minds,” Professor Covic says. “In colder climates, particularly overseas, I’ve heard of instances where the charging plug has frozen into the car. These issues are potential barriers to the uptake of EVs; wireless electricity would remove those anxieties.”

Inductive power technology allows an EV parked over a pad on the ground emitting electronic frequencies to be charged automatically – no wires involved. Initially, the system would be suitable for stationary vehicles in private garages, or in public parking spaces where an EV driver could leave their car and “go about their shopping or business for an hour or so,” Professor Covic explains.

The next stage will be for higher power charge transference, so that the time to charge vehicles would be just a few minutes – ideal for taxis and delivery vehicles clocking up significant mileage in a day’s work. Then the focus will shift to the road itself and how the technology can operate seamlessly in transport networks and infrastructure.

Professor Covic says that is “definitely doable.” There have been trials with a vehicle collecting kilowatts from a pit in the road, whilst travelling at 120 km/h.

“But it’s about economics. There’s a lot to consider around mechanical loading and thermal stress. Once it’s in the road it needs to stay there for the next 30 or so years,” he says.

With the likes of mechanical engineers and ecologists now on board, Professors Boys and Covic say their vision is even more exciting. “It brings a whole other level to it. The bright minds getting involved are encouraging; it really is being embraced,” Professor Covic says.

Not bad for something that was once touted as impossible by some in the science world.

“It feels like we got here by a number of small steps,” Professor Boys says, leaning back in his chair and reflecting on the world-first journey. “But looking back, those steps have actually been quite big and significant. We hear ‘it can’t be done’ a whole lot less now.”

Tesla Model 3 owner, Mandy Simpson, shares what it's like owning an electric vehicle.

Back to the drawing board: automotive inventions that never really took off

Car design has been tweaked multiple times over the 140-odd years since a one-cylinder two-stroke machine...