Dan Wheway recently returned from a stint as a chef at Scott Base in Antarctica. He talks to Jo Percival about this unique experience.

Dan Wheway is a trained chef and former lecturer of professional cookery at Auckland’s MIT who recently returned from a stint as summer chef at New Zealand's Scott Base in Antarctica. 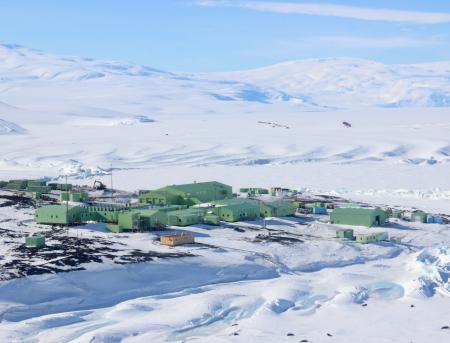 How did you end up working at Scott Base?

Early last year I was watching Seven Sharp and saw a segment about working in Antarctica, which sounded amazing. I turned to my wife and she said, “go on, just apply for it.” It was as simple as that. I put my CV together and applied. The interviews happened over Zoom because of Covid, but I went through the process and did all the psychometric tests, and I got the job!

How long were you in Antarctica for?

I did a summer season. There are two options for working in Antarctica – you either do a summer, which is from September through to March, or 13 months from September through to the following October. Lots of people have been down here multiple times. It’s a bit like working on cruise ships. Once you get your sea legs – or your ice legs – people love it. They have no problems filling the roles.

How many people are at Scott Base?

When we arrived at the end of September there were around 55 people including the winter overs, which was the smallest number we had. We got up to about 85. About half of the people are staff and the other half are scientists and researchers. We also had people who arrived at base but headed straight out to various camps around the continent. So, while there may be an average of 60 people staying at base, there could be another 30 or 40 out on the ice.

Was your experience impacted by Covid?

We had to do online rather than in-person training and we were the first group to do Covid isolation. We were meant to be in Methven for two weeks for isolation, but that ended up being two weeks and four days because we got boomeranged back from Antarctica when our flight couldn’t land due to a storm. In Antarctica, the US base, McMurdo, is only about 3km away from Scott Base but both bases were mostly in amber level because of Covid, which meant there was no mixing. In the first 13 weeks there was only one week of green, when we were cleared to interact with the Americans. Normally there’d be a lot of socialisation between the two bases, but we had to stay within our own group. Maybe because of that we’ve been told that our team bonded the best out of all the groups who have been to Antarctica.

How many people work in the kitchen?

There are three chefs on base. One is always from the Defence Force of a certain rank, and two civilians. Having someone from the Defence Force means that if the other two chefs don’t have the required organisational skills, they can take charge, even though there is no actual head chef. But as a former executive chef, I was nicknamed ‘Dad’ in the kitchen. Between the three of us there was a really good balance of talent.

How do you get food to Antarctica?

Container loads of frozen and pantry items arrive on a ship in February. That lasts for about 12 months. Then we did an order every two to three weeks for supplies via plane. This included fresh ingredients and top-up pantry items. We only missed out on one delivery because of weather. But logistically, it was quite challenging. If I placed an order on a Wednesday, it was processed in Christchurch by Friday and then delivered the next Friday to the airport where it was checked for any bugs or infestations. Then it was wrapped up to go on the plane. Often by the time it got to Antarctica it was two weeks old. I’ve been cooking for 32 years; that kind of planning was a very good learning journey! 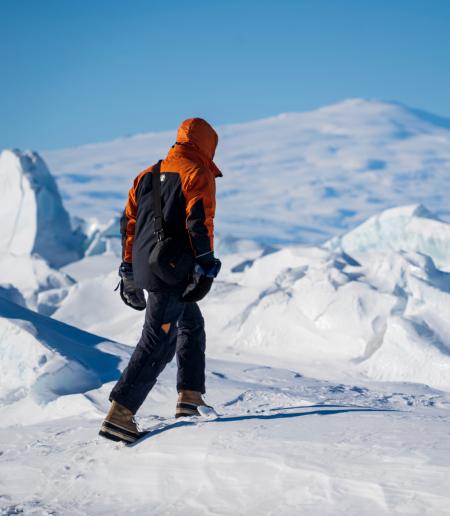 In Antarctica it is very dry. The snow is like dust. The ground is like what you imagine it would be like on Mars. So ingredients like flour are also incredibly dry. When I was making bread, I had to put in a sixth more water to make it resemble normal bread dough. A sixth is a massive amount!

White sugar arrives on the boat and goes into the storeroom where it freezes in winter and defrosts in summer. Because sugar is a naturally damp crystal, it freezes as a brick and it stays as a brick. We had a mallet in the sugar bin to break it into chunks and then we had to put those pieces into a blender to get them to a useable size. So, even getting sugar for baking was a mission! Food will deteriorate quickly from dehydration. However, if you need something like dry breadcrumbs, you can leave it out and it’s not going to go off. There are also no pests like cockroaches or flies. The only thing we were combatting was dust, and there’s not really much of that either.

Did you have a fridge?

In the kitchen there’s a little walk-in fridge and freezer. The extra freezers are outside, about two metres away, between the kitchen building and the sea. There are also three shipping containers outside for storing frozen food. During winter the freezers are turned off because it’s colder outside than the freezer is. By law, freezers need to be -18ºC, but outside it gets down to -50ºC to -70ºC. During winter, the fridge has to have heaters in it!

What were some of the unexpected challenges?

Drinking enough water! Even when I was indoors working, I needed to drink at least five litres of water a day at an absolute minimum. Otherwise, you feel dehydrated. Your throat is dry, your lips are dry and the next day you definitely know it. That was the hardest thing. You really have to force yourself to drink. And I had never moisturised my hands so much in my life!

The other thing I struggled with was the 24-hour sunlight. Even though we had blackout shutters on the bedrooms, which take out about 95% of the light, your body still knows there is sunlight and it messes with your sleep patterns. If you’re in the dining hall or the bar after 9pm, it’s bright sunshine – you could stay there all night and not realise.

What experiences did you have outside of work?

The management team makes sure that everyone whose role keeps them inside gets the chance to go out and see some of the continent. I went by helicopter to the penguin colony at Cape Royds. And having the chance to visit Shackleton’s historic hut was incredible. Just before Christmas the ski field opened, so for about a month we could go skiing, and there were fat bikes to take out on the ice. In peak summer the sea ice starts to break up and the outdoor activities reduce, but at the back of the base there are hills and glaciers where we could walk. When the McMurdo base is open they have sports activities, crafting classes and things like that. There’s plenty to do!