Sarah Colcord created the New Zealand Made Products Facebook page in her South Auckland bedroom during the nationwide lockdown.

In doing so, she presented businesses and individuals with an opportunity to not only survive, but to thrive. The page has since amassed more than half a million followers, kept thousands of small businesses afloat and simultaneously given Sarah an entirely new life direction. The 23-year-old quit her day job to develop the Facebook page into an app and website that’s being touted as New Zealand’s version of Amazon.

It’s called ‘Chooice’ and is a play on the old-school Kiwi saying. It also plays off all the great features of the Facebook page: the endless scroll through the many talented businesses, as well as the excitement of discovering something new. We wanted to take all of the good stuff from the Facebook page: the stories about the nana who has been crocheting for 50 years or the stay-at-home mum making children’s hunting clothes. Any New Zealand business can jump on and set up an account. The group’s current Facebook page will provide a space where businesses can feature on a Live Shopping Broadcast and Chooice will collect a percentage from every sale made. The Government has highlighted the need to help assist with the digitalisation of small businesses as part of its post-Covid recovery plan, and we’re in a really good position to support that.

You have experience in social innovation, youth development, local council and government. You’ve now created a platform for small businesses and individuals to shine; how important is it for people to have the opportunity to grow and feel supported?

It’s so important. I previously served as an elected member of Auckland Council where I worked with many youth, including a young boy from Manurewa, South Auckland. We were recruiting for a new youth member and he had already missed two of his interviews. In his third interview, he told us he was looking for an opportunity to do more than just sit around at home playing [online video game] Fortnite. He was a successful applicant; is now the youth MP for Manurewa, a school prefect, a member of his school’s board of trustees and he was recently accepted into law school. Providing that wrap-around support allowed him to thrive – and that's exactly what he did! He’s achieved so much from that one opportunity. I’m Samoan and I’ve always wanted our rangatahi, in particular our young Māori and Pacific people, to have the opportunity to thrive.

Social media is often seen in a negative light, yet you maintain that we shouldn’t use it to impress people, rather to impact people.

It can quickly become a very toxic experience. But we’ve been able to tap into not just an extremely empowering and supportive community, but a movement. I couldn’t have predicted the impact the page has had on so many people, but also the array of different businesses that are out there in New Zealand; it blows my mind every time I see something new featured. I had no idea that a particular product even existed, or what talented Kiwis are getting up to. That’s the excitement of the page: discovering something new.

What’s been a stand-out success story from the site?

Every day I arrive home to letters and parcels from grateful business owners. A couple of stories in particular have stuck with me; one from a woman whose daughter has a heart defect meaning they went into lockdown early and the sales made through the page literally kept a roof over their heads. Another from a solo mother who lost 100% of her sales at the beginning of lockdown but after posting on the page, tripled website sales and took on six new retailers in New Zealand and two in Australia. Stories like that go against the grain of what so many businesses worldwide are going through. Most of the businesses on the page are not just surviving, but thriving. And doing it in a time that the common story says they shouldn’t be.

The nationwide lockdown caused many businesses and individuals to adapt and surrender to change. Now your new venture requires you to do just that. How does it feel?

It has totally flipped my world! I’ve jumped out of my job and into this vision whole-heartedly. I know it’s going to succeed because I have the right people around me to support me and to deliver.

Technology that brought us Uber, Lyft and Ola is being applied to public transport, algorithm, smart... 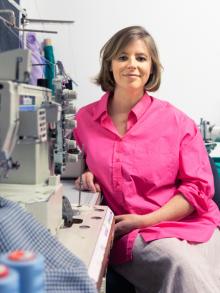 General Manager of RUBY, Emily Miller-Sharma, has launched an apprenticeship for budding machinists, patternmakers and...

Win! A copy of Life with Cars

A set of wheels can play a big role in our lives, spurring memories of milestones...