Wellington-based Vanisa Dhiru is an advocate for equity and human rights, a champion of gender and race equality and is accredited to deliver training on unconscious bias awareness to corporates and community groups.

Growing up in Manawatū, how did your upbringing shape your future?

My parents owned a dairy in Roslyn in Palmerston North, so I literally grew up in the back of the store, which did shape me. At that time, in the 1980s, dairies were busy places and hubs for the community. My parents knew everyone and everyone knew my brother and I. So in some ways it was a bit like to living in a village in India, like my father’s parents’ village, where people would drop in for chai all the time. Our dairy was similar; we were always surrounded by people coming and going. 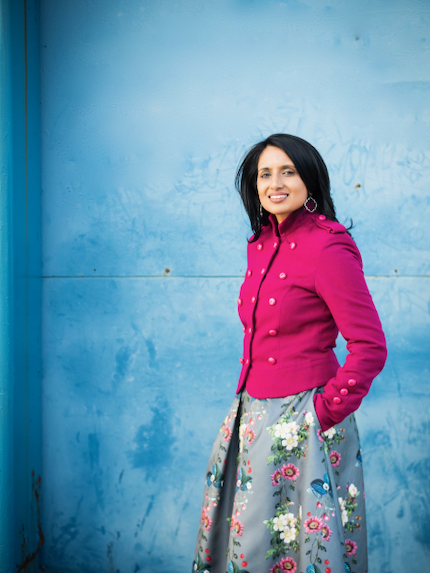 How much were you expected to help out?

We were part of the family business. My brother and I helped during the holidays and after school. Our parents worked long hours and we always had to be ready to serve. Customer service was really important and the key things we were taught were no matter who walks through that door, you smile, say hello and see how you can help. Then you thank them and say goodbye. It didn’t matter if we knew someone or didn’t like them, we treated everyone the same. That public interface travelled through my life and gave me the ability talk to anybody.

What other skills did you acquire?

I have vivid memories of the store closing each night and counting money on the floor with our father. My brother counted the blue and green notes and I did the red and orange. I always assumed I’d end up being an accountant as my mother worked as a bookkeeper before she met my father.

How was your Indian culture kept alive back then, in provincial New Zealand?

At the back of the house our parents spoke to us in Gujarati; in the store we spoke English, which made the two spaces very different. But when you attend an English-speaking school, keeping culture strong is difficult. Particularly in Palmerston North in the 1980s.

Was there much racism?

Certainly being the only Indian family in our suburb was hard at times. I knew we were different but I didn’t necessarily understand what made us different. My parents were really busy and I don’t think they wanted to talk about it. They just wanted us to succeed in education, so that is what we focused on. Racism was there, but I don’t think we felt it as strongly at that time, unlike some families from other cultures do today. We also had a lot of local support because our family business was so integral to the community.

What happened to your accountancy ambitions?

At the end of my higher education I graduated with an honours degree in design from Massey and a graduate diploma in marketing and commerce from Victoria University. I was lucky to have parents who were happy for me to excel in whatever field I chose, so long as I could stand on my own feet at the end of it.

And your first professional role after university?

My final university paper looked at selling New Zealand landscapes to Bollywood. A former trade commissioner to India became a mentor for me during that project and when I graduated he hired me to be his executive assistant at New Zealand Trade and Enterprise, to get in the door. After six months I moved into the marketing team, which was where I wanted to be.

How did you move into the social equality sector?

Early in my career I went on a leadership course with 60 other young people from across the country. I discovered that I wanted to work in the not-for-profit sector when I was exposed to the idea of building networks and sitting on boards. The idea of sitting on boards, being in governance and supporting organisations, was just becoming fashionable, although it’s much more common now. My first board position was with the YWCA of Greater Wellington. It was there I saw the good that could be done, working in the community helping to improve young women’s lives, and I knew that was the work I wanted to do.

Where does the inspiration to serve your community come from?

When I was 25 I visited my grandparents in India with my brother. It was a huge culture shock, and I realised I had a western view of how life worked. I saw how my Indian-based family operated; how with few resources they helped others in the village to provide what was necessary in life. Their view on life and what mattered was so different. Being there and observing helped me to reflect on who I was, where I come from, my whakapapa, how I came to be on this earth. It was an incredible reflection from a leadership perspective.

I think we have made progress, as people are more confident to share their thoughts today, especially online. We also have a very strong Māori community that is embracing their culture. Seeing a lot of action from Māoridom – our indigenous population being out there and proud – can inspire a lot of us from different cultures, because we can understand that concept of walking in two worlds.

How do you use your voice to make society more equitable?

There is much work to be done around discrimination with issues like gender equality, sexism and racism. I’ve faced discrimination, firstly as an Indian and secondly as a female, and some of those discriminatory barriers have been things I’ve worked on to overcome. I sometimes wonder if perhaps I’ve been lucky or strategic, being able to overcome barriers where others continue to struggle. That’s why it’s so important for me to work in this sphere. I now define success as being able to serve others in this area.

Could you explain the work you’re doing around unconscious bias?

I help people understand how they grew up; how they formed their early thinking and prejudices that then reflect onto others. I ask people, what was your cultural context and background? How did you grow up to think the way you do today? How do we unpick and unpack that thinking if it isn’t supporting the wider community? What are the reasons for your unconscious bias? It’s about upbringing and how our brains are formed and learning how to change our bias to be more useful in the world today.

How do you train people to change their ways, when presumably some of it is really deep-seated?

The first thing to remember is that everybody is biased about something. Our brains are working and judging all the time; no-one is born to think a particular way. We’re influenced as we grow up and walk in the world. We form judgements from our family, during our schooling or from workplaces. There are many influences, but if you think about how you are biased and why, then you can decide which bits are OK and which bits need deep thinking, or a change of gear. Everyone has the power to change their thinking and act differently.

What is your vision for the future of New Zealand?

Firstly, we share this land with tangata whenua and it is important for all of us who live here to be respectful of that privilege. Life is about being able to feel successful – whatever that means to you – and healthy and live in a land that is cared for so that future generations can live peacefully in a bicultural nation within a multicultural society. Peace is a big, lofty, aspirational word but if everyone can thrive in a way they wish to thrive – and it’s not for us to determine what that looks like – that would create a more equitable society.

What can we as individuals do to work towards a better world?

I’d say everyone has some ability to serve others in this world, whether it’s a small contribution or a larger one. If all of us did a little bit, we could make stronger, greater communities for all of us today.

Reported by Elisabeth Easther for our AA Directions Spring 2021 issue