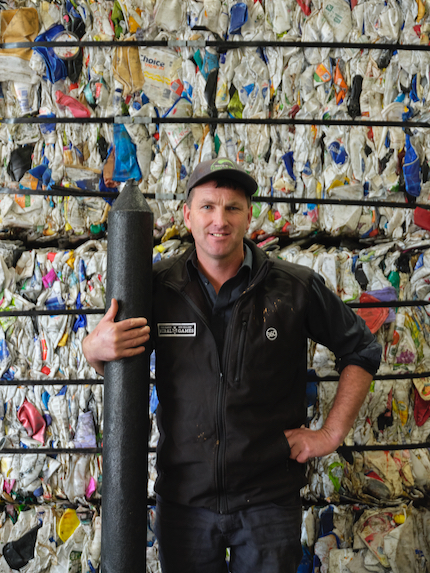 Plastic is extremely useful. It’s cheap, clean and strong. But it’s also very hard to deal with once it has been used, and is at the heart of several serious environmental issues.

“We help solve that problem,” says Future Post founder Jerome Wenzlick. And it’s not the only problem his business addresses. Having invented an effective method of recycling soft plastics, Jerome has developed a solution that’s contributing to change in New Zealand and is poised to go beyond.

A few years ago the farmer and contract fencer was building a security fence around a South Auckland site and became frustrated by the number of wooden posts being broken in the process. Digging around, he found lots of old plastic in the soil and realised he was working on an old rubbish dump.

It got him thinking that there must be a better way to deal with rubbish plastic. Combined with the problem of breakable wooden posts, he realised melted plastic had potential for creating substitute posts. Future posts.

He and a business partner researched options in the US but didn’t find a viable system. “We couldn’t make a prototype so we decided to just do it,” Jerome says. “We designed and built a machine and got on with it.” 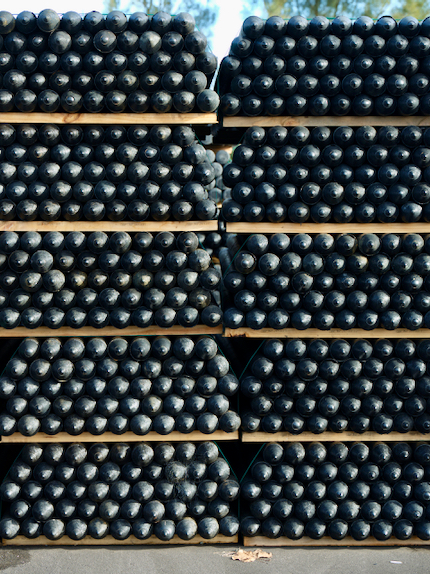 Future Post processes over 10 tonnes of plastic a day; plans are afoot to double that. Different grades of plastic are chipped and mixed together in specific ratios. The mix is melted and fed through an extruder into post-shaped moulds of varying lengths and diametres. Currently they can make posts up to three metres long for use in farming, viticulture, horticulture, and marine and equine industries.

Most of the plastic is sorted before it reaches the Waiuku factory but, as Jerome says, it doesn’t matter if a bit of non-plastic is mixed in.

“The beauty of the system is we can put filthy plastic through because it’s fence posts we’re making, not surgical equipment. It’s for outdoors.”

The black posts are as strong as wood. During the process a UV stabiliser is added so they’re not affected by exposure to sunlight. Being plastic, they’re also immune to moisture. They’re a bit flexible so they don’t break, which can happen to wooden posts when machinery or large animals collide with them.

Farmers don’t need to use insulators when stringing electric fencing on them; nails and screws go straight in. Another bonus is they don’t leach nasty chemicals into the soil, so can be used on organic farms.

A winning formula of this success story is that businesses pay Future Post to take their soft plastics. Product stewardship, whereby a manufacturer is responsible for reducing the environmental impact of what they produce, includes involvement in recycling schemes.

Everyday New Zealanders can contribute to the scheme by sorting soft plastics, such as the wrap around AA Directions, and delivering to collection points around the country.

Soft Plastic Recycling bins can be found at a number of Countdown, The Warehouse, New World and Pak'n Save stores, as well as other locations in Auckland, Waiheke

Island, Northland, Waikato, Bay of Plenty, Hawke’s Bay, Taranaki, Christchurch and Wellington regions. More bins are being introduced over the next few months. See recycling.kiwi.nz/store locator to find bins near you.

All soft plastic packaging should be clean, dry and empty; if you’re unsure what constitutes soft plastic, scrunch it into a ball. If it doesn’t bounce back, it can be recycled.