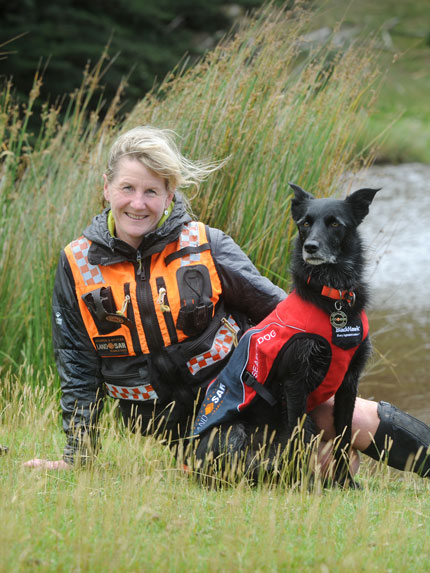 Search and Rescue volunteer, Emma Milburn, and her dog, Dart.

The Australian tourist had become lost in the mountainous countryside, night had closed in and snow had begun to fall in the 2016 incident, one of many search and rescue personnel deal with every year.

He told media after his ordeal he did not think he would survive.

But at about 12.30am on a frozen October night, volunteer Emma Milburn’s search dog Dart began sniffing the air, indicating she had a scent.

“We were working round the track, we got round and we heard him yell out. The dog went in, we followed and we found him. For everyone involved it’s such a relief to find a person.’’

It is the team effort of a search and rescue mission that is the key to its success, from the planning and management of the search to the teams on the ground.

Providing an essential knowledge base behind the searchers is a book – Lost Person Behaviour – detailing the expected behaviours of people based
on their profile.

While volunteering takes her to some of New Zealand’s harsher climes, Emma works by day at the Dunedin City Library, where she is a digital outreach co-ordinator. Her association with

New Zealand Land Search and Rescue (LandSAR) began through her job when she attended a team leaders’ course where it was suggested she do something to put back into the community.

Keen on tramping, she chose an outdoor pursuit that would help others and started doing search and rescue. Soon after, she trained her dog Dart.

An alert to begin a search for a missing person comes from police. Search and rescue advisors are brought in, an incident management team set up, and searchers deployed.

Searchers are briefed and given equipment and a location to search for anyone from a missing tramper to someone with Alzheimer’s lost in the city. One important aspect of a search, aside from the terrain in which a person was lost, is the terrain of their mind, which is where Lost Person Behaviour comes in.

“We’ll consider the missing person and work out what sort of profile they fit, whether they’re a hunter, a hiker, a day walker, a child,’’ Emma says.

The book contains a collection of statistics and profiling collected from around the world, which helps give an idea of what different people might do in any situation.

Once in the field, searchers might work from a last known point where the person had been, for instance a vehicle at the end of a track. Searchers will try to determine a direction of travel, perhaps from footprints leaving the vehicle.

“If we can establish their prints, then we might find those prints along the track and be able to follow them.’’

There are ‘decision points’ for a lost person, perhaps a junction in a track, or something that looks like a track, from where they might get stuck in the bush or lost in the dark.

Emma says a search may involve five teams of two or three, which would use various search techniques, including ‘sound and light lines', using whistles and lights to attract a person’s attention.

“We’ll work along the track, blow the whistles, listen, then carry on.’’

Dogs are another tool in a searcher’s kit, with some following a scent on the ground, or others, like Dart, who is an ‘area search dog’ and follows a scent in the air.

On a good day, all those aspects come together and the lost person is reunited with their loved ones.

For Robert Galdamez, and many others, the skills of everyone from search management to a highly trained volunteer and her dog mean the difference between life and death.

And Emma has a word of advice for those who do get lost: “Stay put, and stay together.’’

Reported by David Loughrey for our AA Directions Autumn 2018 issue

While not a silver bullet, there’s a new movement sweeping the country that’s helping to reduce...

The entire family can enjoy the dog-friendly Nydia Track.