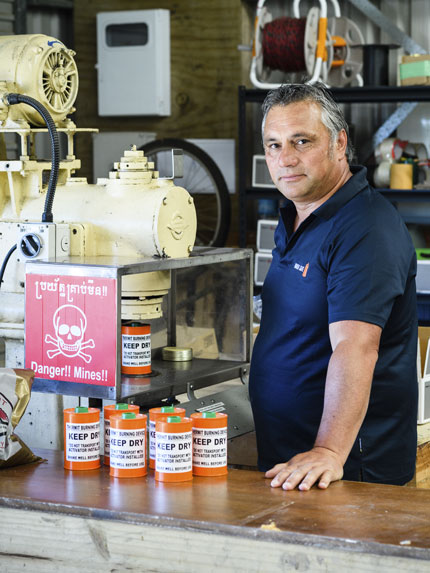 It mightn’t look overly life-changing; as unassuming as a baked bean tin or pot plant, perhaps. But the Thermit device, designed by Kiwi company Burnsafe, is a game-changer saving lives around the world.

Marty Donoghue may live thousands of kilometres away from countries where bombs and explosives are a problem, but it hasn’t stopped him pouring hours of energy into finding a better solution to the disposal of landmines than “just blowing everything up”.

The Wellington resident is behind Burnsafe, which uses specially designed containers to safely deal with landmines.

Marty was working for the New Zealand Defence Force when he was appointed by the United Nations to lead the bomb disposal response following the invasion of Iraq in 2003. There he saw a need for safe, cheap and effective means of disposal.

“We were crossing the border into neighbouring countries Syria and Turkey and they weren’t too happy with contractors racing around with explosives in the back of trucks,” he says. “We needed a non-explosive capability to dispose of landmines. Nothing that was currently available worked effectively.”

Traditionally, landmines are neutralised by a small, explosive charge near the fuse which sets it off. It’s a dangerous exercise.

Burnsafe devices produce molten iron, at a temperature of 4,500° C, to melt the casing of unexploded landmines and bombs. The explosive content is then burned, without blowing up the device.

The concept isn’t new;  it’s based on a process developed in the 1890s used in railway welding, in Germany.

“It has many years of technology behind it but it was never envisioned that someone would use it for this,” Marty says.

Living in a war-torn country riddled with landmines, where hidden explosives terrify, kill and maim people, is extremely challenging. Apart from everything else, it hinders potential for communities to flourish – and this is the reality for close to 80 nations worldwide. More than 15,000 lives are lost each year from exploding landmines, many of whom are children.

Today, Burnsafe devices are used in Colombia, which aims to be landmine free by 2021, and Laos, where large bombs were dropped during the Vietnam War. This year, Marty has his sights set on the Middle East, as well as the Solomon Islands and Kiribati in the South Pacific which are still contaminated with World War II ammunition.

Marty also designs education programmes to train operators overseas to use Burnsafe devices. He says having an impact on the future of communities previously mired by deadly devices makes his work worthwhile.

Reported by Monica Tischler for our AA Directions Autumn 2018 issue