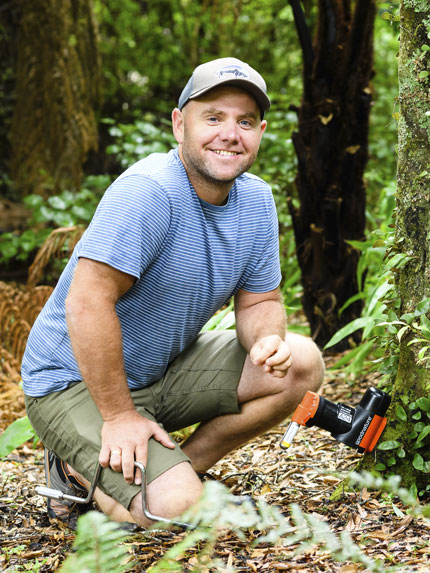 If New Zealand is to make serious headway in its mission to become predator free by 2050, it needs to get serious about trapping. And that’s exactly what Robbie van Dam and his team of innovators at Goodnature in Wellington are doing.

Robbie, a Victoria University graduate, and his former classmates Craig Bond and Stu Barr, saw a problem with traditional traps capable of killing only one pest at a time. The only alternative was poison. The trio got to work creating a better solution.

“Older methods of controlling stoats and other pests are bulky, hard to set, take skill to use and trap singularly. You have to check them regularly, regardless of whether you’ve caught anything or not. We saw that that was a real problem and kicked around a lot of ideas.”

They came up with Goodnature, the world’s first commercially available trap that humanely kills multiple pests, without manual resetting and without poison.

Rats and possums are lured into the trap, which is attached to a tree, by a non-toxic, ganache-like bait. Once inside, a CO2 canister triggers a lethal blow to the pest’s skull. While the animal is falling, the trap is reset. He says a single trap will often kill around five possums a night; the CO2 canister has enough power to trigger 20 times.

Robbie was working part-time on protecting New Zealand’s endangered species for the Department of Conservation (DOC), when he secured an innovation grant to invent and launch the trap.

“We were extremely excited; it gave us a task. We calculated that it cost around $10 every time a DOC worker checked a single trap. Switching to a resetting trap would save between $10 million and $12 million a year,” Robbie says.

The business went fulltime in 2008 and today, close to 100,000 traps are in operation around New Zealand. Goodnature traps are also exported to
25 countries.

In New Zealand, the focus is on trapping possums, stoats, rats, mice and hedgehogs. Elsewhere, pests are different. Goodnature is working with the Swedish government to target mink and are developing traps to help Hawaiians deal with mongooses and squirrels.

“The world is suffering from biodiversity decline and we support countries with the same issues we have, to help save a broad range of species. There are no barriers to our trap’s implementation,” Robbie says.

Goodnature will target Asia in the future to help tackle its destructive rat population.

“The business is a mechanism for us to achieve our aspiration of removing all pests from New Zealand,” he says. “With a lot of curiosity, it’s amazing what you can do. Choosing something ambitious and having a go at solving it is really fun.”