The golden hills of Nelson, folded into soft curves, shone in the last of the afternoon sun. We were flying in, looking down to where we’d be exploring and talking about how the landscape has been inspiring to artists.

Later at The Suter, Nelson’s public art gallery, as if we’d conjured it up – an exhibition titled Nelson Hill presented that golden landscape with paintings by Toss Woollaston, Colin McCahon, Rita Angus, Doris Lusk and others. 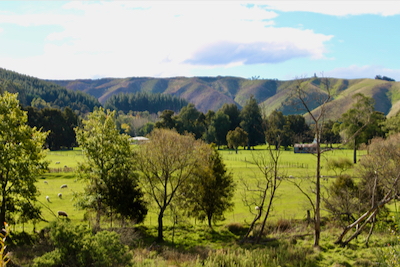 We were on the Great Taste Trail, a cycle journey of four days that took us past apple orchards and berry gardens, cafés and cellar doors, produce stalls and pubs – but the creative vibe of this part of the country was as prominent as the food and wine. We cycled through that inspiring landscape as the first day closed in, the light stretching across distant hills softening them like sun-faded fabric. We called into galleries, photographed murals, talked to weavers and potters and gardeners. Riding through an inland valley following a river to the coast, we sensed the artists and craftspeople living down secretive driveways, quietly making lives better with their gardens, sustainable houses and ceramic studios.

Flicking down the stands on our ebikes, we’d dive into our panniers for snacks and water bottles and sit on some grassy spot for a while to enjoy the sun and imagine those content lifestyles.

We’d started the trail at Stoke, on the outskirts of Nelson, taking ebikes and maps and instructions from The Gentle Cycling Company and leaving our heavy luggage for them to deliver to our accommodation each day. Brilliant arrangement. It made it doable. Leaving base, we cycled a pretty urban path and popped out near the coast before heading inland. We could see in the distance where we were headed, at the hazy end of a wide horseshoe scoop.

Through little towns – Richmond, Brightwater and Wakefield – we stopped for lunch, then coffees and to photograph old churches, a monument to Ernest Rutherford, rural views. The trail was easy to follow with the maps provided and reassuring roadside signs, too. 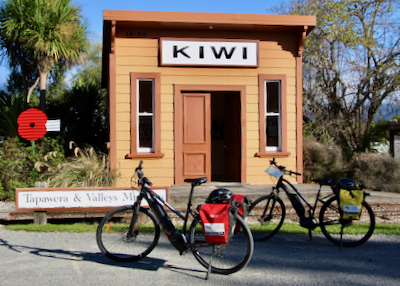 We cut back and forwards into rural territory, past farms and orchards then up into forestry land toward Spooners Tunnel, climbing under trees then into the long, dark hole. It was an amazing accomplishment and interesting to see what was involved in making it but I couldn’t wait to get out of there! At the other end, the land sloped down and the ride was a glide, with just a bit of rain, into Tapawera, swooping into town in the fading light. That was a long day – as was the next one – but on ebikes, completely manageable.

We ate dinner at the Tapawera pub; sport on the TV in the public bar, locals in their work gear catching up over pints.

In the morning The Gentle Cycling Company folk arrived to collect our luggage and to deliver a spare tube, as we’d had a puncture the day before. It felt good to have their support. As well as providing insight as locals and experienced cyclists, they had thought of every detail of the bikes, the batteries, all the details of our journey to ensure it went smoothly.

Before setting out, we visited Tapawera museum in a tiny old railway station to read about pioneering families, military camps, the growth and loss of rail.

Once riding, we passed the tapestry of the land – apples, empty hop frames, native tree nurseries, berries; evidence of fertile land and an abundance of sunshine.

We rode past horses, pigs, chickens and angora goats, following a shallow, clear river with stones rattling in the current. Crossed historic bridges, swingbridges, skinny, swaying pedestrian bridges – and when we found the winery we were headed for was closed, we unloaded out panniers and picnicked by the river. Swallows, paradise ducks and kingfishers busied-up the sky.

Unable to resist an interesting, welcoming gallery in a beautiful old garden, we called into Ing Pottery. Soon after, we stopped at a produce stall selling pickles, lemons and apple cider vinegar. Riwaka provided a toilet break in readiness for the last bit of the day, along the coast and through a mountain bike park – an exhilarating and intense blast – then into Kaiteriteri.

Arriving in Kaiteriteri’s Kimi Ora Eco Resort was, in a word, delicious. As soon as we could, we slid into the hot spa pool, sighing in relief to be off the saddles, easing into the heat of the sauna then into the blood-warm indoor pool. And back into the spa.

Set high, the resort looked over the bay. We watched a full moon rise and hang in the clear sky leaving golden notes on the night sea.

In the morning, over a healthy, wholesome breakfast, we watched distant boats coming and going in a flurry of Kaiteriteri activity and decided to jump on board for a taste of Abel Tasman National Park. It didn’t quite go to plan but we saw enough to want to return, with more time.

After another blissful night at eco-conscious Kimi Ora we were back on the trail, riding through an orchard, along the coast on boardwalks and narrow, smooth paths retracing our path to Riwaka. 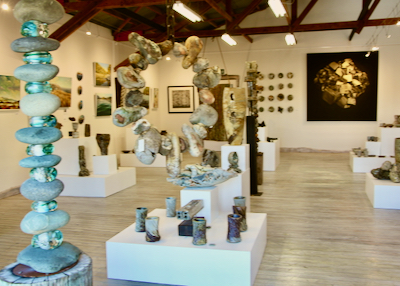 On to Motueka by back roads that took us along the foreshore, following an unfamiliar and fascinating stretch of coast, we experienced a quiet estuary and sheltered wetland areas with the open sea in the distance. Mount Arthur had snow on its peak; we could feel it in the wind.

After a detour into Motueka for lunch, we swung away again to see the port. We called in at Toad Hall café. which was buzzing with diners and packed with colour, delicious food and local produce. Soon after we were riding up into farm country with quiet, unsealed roads leading higher and higher to way up above the Tasman – rough under the bike, but fun – then down into the valley leading to Māpua. After more distractions at more craft places – more pottery, a weaving studio – we landed at For Puffed Pedallers, a lovely B&B in the hills above Māpua. This was the epitome of serenity with welcoming touches; warm hosts, a full colourful garden, a super-comfortable bed.

Māpua Wharf is famously interesting; we enjoyed coffee in the sunshine at Alberta’s then boarded the little ferry to Rabbit Island. The trail where we landed lead across the island, edging the coastline through pine forest with strange mushrooms and toadstools, past wetlands, along boardwalks and over a bridge. We detoured just a bit to Seifried Estate where Harvest Kitchen fed us a fabulous brunch.

From there the coastal trail ribboned into Nelson along more boardwalks, past wetlands, where wading birds posed among clumps of reeds and grasses, hovering over pools in the high tide in the late morning sun.

All up, we rode just over 200 kilometres. The last blast was back down that familiar pretty avenue that had once been a rail line, passing old gardens rich in autumn colours, looping back to base.