When overseas visitors fantasise about a trip to New Zealand, Abel Tasman National Park is the kind of place they have in mind and we Kiwis are beyond lucky to have it right at our front door.

Spectacular beaches are so golden, they really are the stuff of dreams. Crystal clear streams tumble down through the valleys to meet the sea. The naturally sculptured granite cliffs are visually stunning. The crystal-clear waters of Tonga Island Marine Reserve are the perfect place to swim, snorkel or kayak.

Abel Tasman is probably New Zealand’s best-known and most popular national park – but it really has to be seen to be believed. And that’s the case for approximately 100,000 lucky visitors a year.

The major attraction is the Abel Tasman Coast Track, which is 51 kilometres long and hugs the coast, offering spectacular views as you reach the top of a ridge, then back down to sheltered swimming and picnic spot The track can be taken on by people of most ages and levels of fitness, taking three to five days with plenty of time to explore. Many summer holiday-makers choose to walk only short sections of the track and may use boat services from Kaiteriteri or Mārahau to return to their starting point. 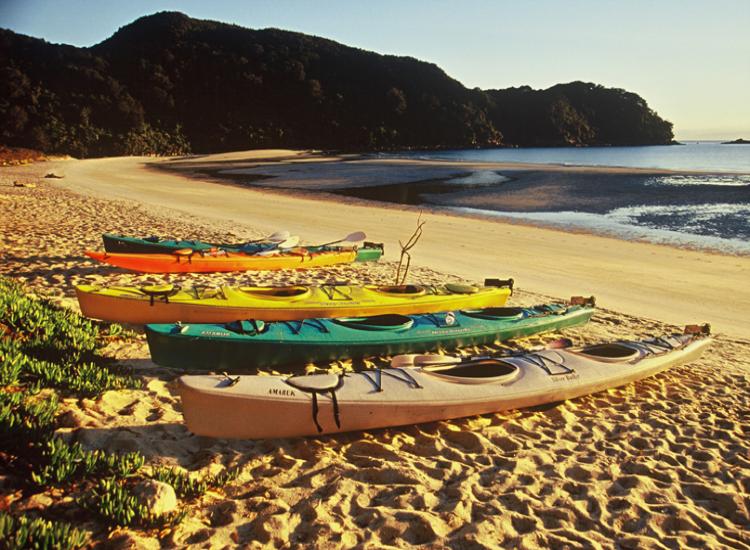 Attractions along the way include the waters of Tonga Island Marine Reserve,which run alongside the Abel Tasman National Park. An enticing 20-minute side trip on day two takes you through lush trees to the secluded Cleopatra’s Pool a natural rock pool with a moss-lined waterslide fit for a queen.

Gliding on the azure waters fringed by bush and blinding white-sand beaches, paddling in the shadow of the massive granite boulder known as Split Apple Rock – these really are must-do Kiwi experiences.

Abel Tasman National Park is a good place to visit at any time of year, but during summer the park is particularly popular and the bays are dotted with sea kayaks, sailing boats and other watercraft. Native wildlife is an essential part of the scenery.

Tūī and bellbird song fills the forest; shags, gannets and little blue penguins dive for their dinner and fur seals lounge on the rocks around the edge of Tonga Island

The park is named after Abel Janszoon Tasman, the Dutch explorer who was the first European to reach New Zealand, during his travels with the Dutch East India Company in 1642. Tasman's middle name has been adopted by Project Janszoon a privately funded initiative working in partnership with DOC on the ecological restoration of the Abel Tasman National Park.

For at least 500 years Māori lived along the Abel Tasman coast, gathering food from the sea, estuaries and forests, and growing kūmara on suitable sites. Most occupation was seasonal but some sites in Awaroa estuary were permanent

The Ngāti Tūmatakōkiri people were resident when, on 18 December 1642, the Tasman anchored his two ships near Wainui Mohua(Golden Bay). He lost four crew in a skirmish with the local people and sailed away without stepping ashore.

About two hundred years later, around 1855, European settlers began to log the forests, build ships, quarry granite and to farm in the region. For a time there was prosperity but soon the easy timber was gone and gorse and bracken invaded the hills. Little now remains of their enterprises. 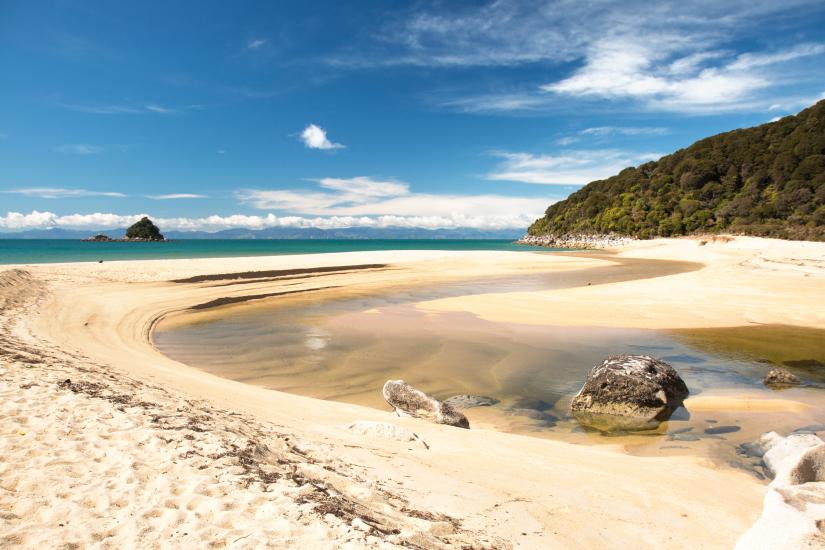 Concern about the prospect of more logging along the coast prompted a campaign to have 15,000 hectares of Crown land made into a national park in the late 1930s. Nelson conservationist Perrine Moncrieff led the charge and presented a petition to the Government that suggested Tasman’s name for the park. It was opened in 1942, on the three hundredth anniversary of his visit. 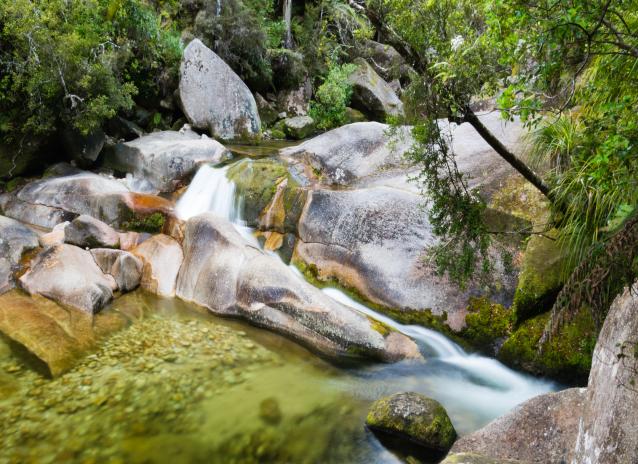 At first sight of Golden Bay from Tākaka Hill, you get the feeling this is definitely a settlement that could live happily apart – one of the last, loveliest places on Earth. Read the story . . .

The Abel Tasman Coast Track is 60km long and blessed with golden beaches and lush coastal native bush. Unsurprisingly, it's one of New Zealand’s best-known and most popular walks.  Read the story . . .

Extending 35km east in a sweeping arc east from the northernmost extremity of the South Island, Farewell Spit is the longest natural sandbar in the world. Read the story . . .