You know it’s going to be a good weekend when it begins with a bargain. In South Taranaki’s Eltham, this means cheap cheese.

There’s nothing fancy about the Eltham Cheese Bar, part of the town’s Fonterra factory, but what it lacks in glamour it more than makes up for in price. Bulk offcuts of vintage cheddar and supermarket brands are available at around half the retail price. We leave with a stuffed chiller bag.

Heading north, Mount Taranaki draws us in like a beacon, snow-capped, symmetrical and stunning against cobalt blue skies. The inland road takes us around the eastern side of the maunga and we watch the light shift across his snowy flanks revealing pleated gullies and rocky scree patches folding to crumpled forest. It seems unfathomably steep, like an equilateral triangle. 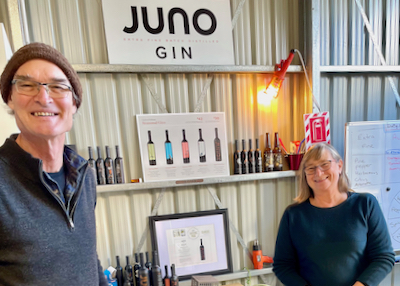 An easily-missed warehouse in an industrial area outside New Plymouth is home to one of the region’s most innovative distilleries. Juno Gin was established in 2017 by husband and wife team Dave and Jo James. With an award-winning signature gin and a regularly evolving range of seasonal releases, Juno offers on-site tastings and cellar door samples. We learn about the different botanicals used in each batch – from the ubiquitous juniper berries, to New Zealand coriander seeds, liquorice root, which provides sweetness rather than aniseed flavour, mānuka honey, kaffir lime and the mysterious angelica root that must be harvested under moonlight, otherwise it produces a phytotoxin activated by UV rays. 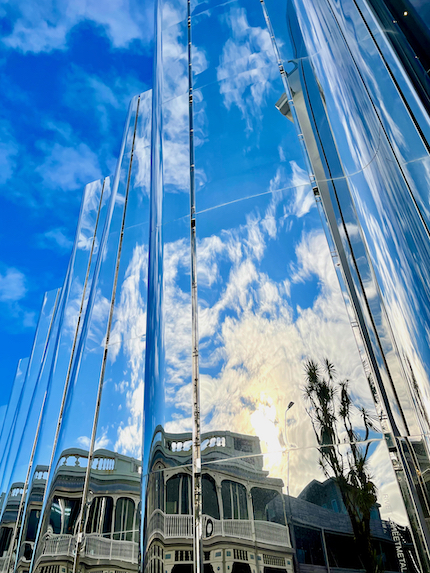 There is no avoiding the Len Lye centre at the Govett Brewster Art Gallery – it is directly across the road from our hotel. Playful and joyful from the outside in, we snap photos of ourselves reflected and distorted in the shimmering mirrored exterior.

Inside, we’re just in time to catch the day’s first performance of Lye’s Wand Dance. The latest large scale Lye artwork on display, Wand Dance begins as a cluster of simple metal rods standing in a dimly lit room.

As the recital starts, the wands begin to move in an immersive, multi-sensory performance. Metal bells attached to each rod jingle with increasing intensity as the wands twist and spin, building to a crescendo. We walk amongst them; quietly, grinning.

All of Len Lye’s kinetic works explore the correlation between patterns of movement, sound and space. Violent vibrations have a delayed response; shapes and sounds are created by motion.

Like Wand Dance, Lye’s smaller pieces are surprising and delightful, from the subtle and mesmerising Moon Bead – a single elegant ball on a slender strand of metal that casts shimmering shapes as it cuts through the air – to Universe, a huge bouncing coil of magnetised metal that makes eerie echoing reverberations as it connects with a wooden ball suspended above.

When it comes to eating, our endeavours are many and varied. Weekend highlights include Social Kitchen’s firecracker chicken; so spicy we’re all dabbing our brows, and the bright pink Free Radical Cherry Sour at Shining Peak Brewing. Doughnuts from Public Catering Co are dense and sugary; the Madame Plum cocktail from Snug lounge is an exotic mix of lychee, Japanese plum wine and Prosecco, and the Reuben from Ozone coffee roasters – packed with pastrami and sauerkraut – is one of the best toasties I’ve tasted. But the unexpected gastronomic star of the weekend is the fermented black garlic pudding from Meat & Liquor. Rich, sweet, and undeniably garlicky, it is unusual and sublime.

To counter our calorific consumption, we head to Paritutū Rock, where I quickly discover that this New Plymouth landmark is not for the faint of heart – i.e: me. The lure of 360º views is tempered by an almost vertical scramble up craggy rock, using chains to haul yourself up. I climb to the top of the wooden steps, feeling woozy just watching the more intrepid adventurers above me.

Even from this vantage point New Plymouth spreads out below – the sea still and gleaming, punctuated by Ngāmotu, the Sugar Loaf islands. In the distance, the snowy peaks at Tongariro National Park are clearly visible on the horizon.

Back on flat ground, a seaside cruise along the Coastal Walkway proves a more productive – and much less terrifying – way to stretch our legs. We cycle along undulating concrete paths through kikuyu-clad dunes and on wooden boardwalks next to lapping waves, riding beside families, joggers and many happy dogs. The Coastal Walkway stretches over 13km from Port Taranaki to Bell Block.

Midway, we ride across the sculptural Te Rewa Rewa bridge, it’s fishbone ribs white against the cloudless blue. Then we turn back towards the city heading for another Len Lye sculpture – the famous Wind Wand – as the sun sinks, golden and glowing towards the horizon.