While there are short walks that take you to the base of Franz Josef Glacier, the only way to actually set foot on the ice is via helicopter.

Regular tourist-ferrying flights depart from Franz Josef Village each day and, on a cloudless morning, we join a group to get up close to the West Coast’s icy wonder.

Franz Josef Glacier or Kā Roimata ō Hine Hukatere – the frozen tears of Hine Hukatere – descends from 3,000 metres above sea level to 240 metres over a distance of 11 kilometres, making it one of the steepest glaciers in New Zealand. 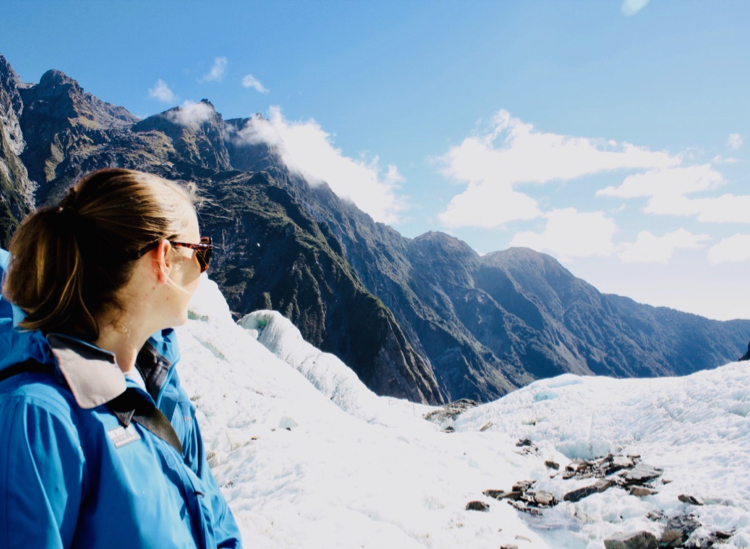 From the air, Franz Josef looks like a grubby throw rug draped over the head of the valley. It’s not until we’re actually standing on it that you can get any sense of scale. And even then, it’s difficult to grasp.

Up behind our landing site, there is a chunk of exposed rock in between separate ice flows. Our guide tells us that this the height of the Eiffel Tower; at the névé, the glacier is the same size as central Manhattan. Nearby, cubed blocks are the size of 60-storey buildings. But with no human-made points of reference, scale is almost impossible to judge. 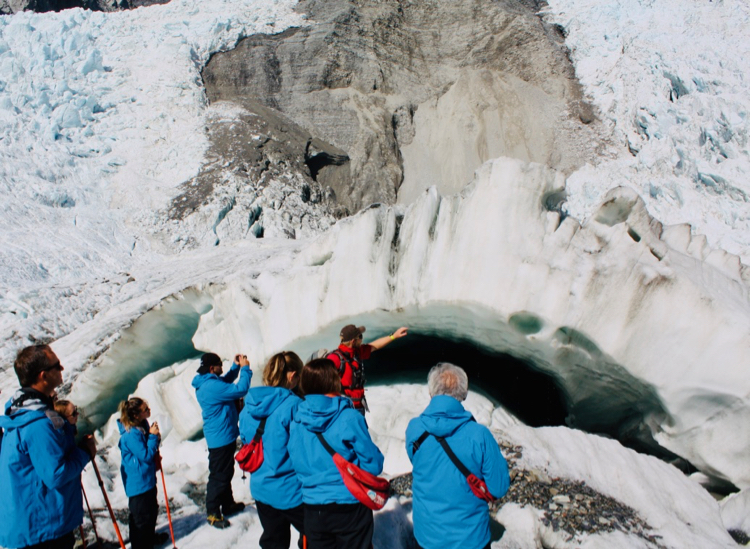 The exposed rock is the height of the Eiffel Tower. © Ben Percival

In the centre of the glacier, the ice is 80-100 metres deep, tapering off at the edges where it meets the valley walls. Back in 2000, it was 200 metres deep and in the 1980s and 90s Franz Josef and its neighbour, Fox, were both advancing, growing year on year. In the last ice age, Franz Josef Glacier extended to the Tasman Sea.

We set off on our walk, ice-prodding walking sticks in hand; steps made secure by our spiky crampons, though we are told to stick to the trails that the glacier guides have carved for us. The chipped ice is like walking on spilt slushy.

There are two distinct sides to the glacier – one with crevasses, the other with ice caves. We explore both.

As independent contractors, the guides not employed by the helicopter companies, but are certified to work with all of them. They spend all day up on the ice, and every day is different.

Glaciers are dynamic beasts and Franz Josef can move an average of one metre every day, though at its fastest, it has been known to shift up to four metres. It’s crazy to think of the apparently solid ice we’re standing on being so active, like a living creature. 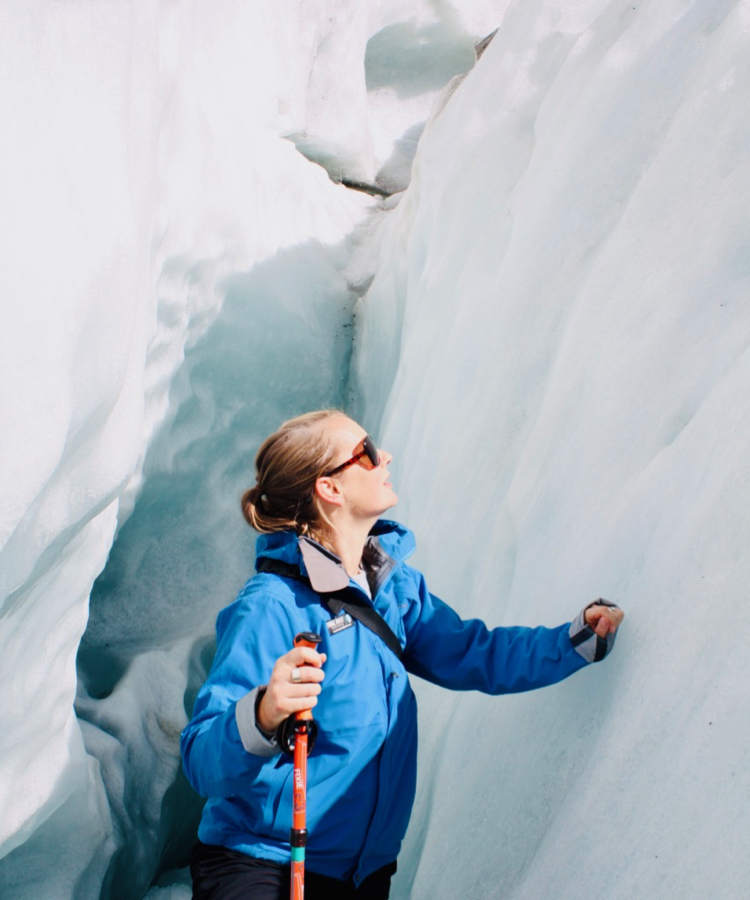 This movement creates landscapes that change and evolve at a rapid rate. Ice caves, tunnels, seracs and crevasses appear and disappear, so no two days are ever the same.

We squeeze, single-file into narrow gaps, pause under dripping overhangs to take photographs and scramble across slippery shelves of blue ice. It’s blue due to the refraction of light rays – the denser the ice, the bluer it is. 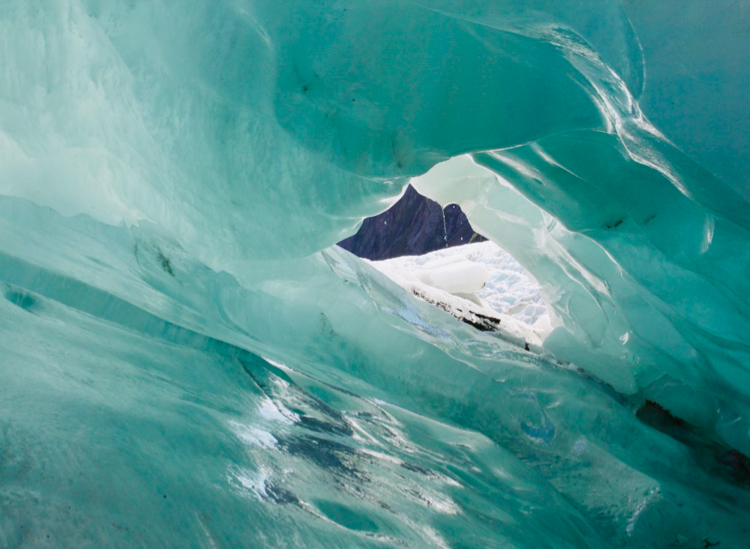 The denser the ice, the bluer it is. © Jo Percival

One square metre of ice weighs a tonne and, higher up, the glacier is cracked and crumpled under its own weight. We pause to watch with bated breath as booming chunks of ice crumble off the glacier face as we pick our way up a stream. The guides are unfazed. This happens a lot and despite the noise, it’s actually a very safe distance away from our group.

A few weeks before our visit, the West Coast had been hit with a massive amount of rainfall – even more than usual – and the water running underneath the ice created a hole through to the bedrock. It has closed up again by the time we’re there – glaciers are remarkably self-healing.

The other surprising fact is that it’s not cold. Our guide wears just a T-shirt and in summer it can get up to 31º on the ice.

Standing in the warm sunshine with rivulets tricking under our feet, global warming is inevitably front of mind. Glaciers are some of the first things to be affected by climate change. Currently, Franz Josef is melting 1/10th faster than usual. Visit this remarkable place while you still can.

Five fun things to do on the West Coast

Take a road trip down the South Island's West Coast where you'll find natural hot pools, gold mining heritage and some of New Zealand's most spectacular scenery. Read the story . . .

Follow a rocky riverbed path then climb to the Franz Josef Glacier viewing area. It's a beautiful yet dangerous place that is sometimes closed, so check it's open before you start. Read the story . . .

Many of the crinklier bits of New Zealand’s geography were formed by the slow but insistent action of glaciers. Read the story . . .

Experience Fox and Franz Josef – two of the 140 glaciers that flow from the Southern Alps. Read the story . . .