Auckland's North Shore: the ‘other side’

They say there are two kinds of Aucklanders: those who live on the North Shore and those who want to.

It's mostly just Shore dwellers who say it, but they could be onto something.

Auckland’s Harbour Bridge, while really only a short stretch of motorway, is a mental barrier for many, but those who do not dare to venture over it miss out on the delights of seaside suburbs, golden-sand beaches and café culture. 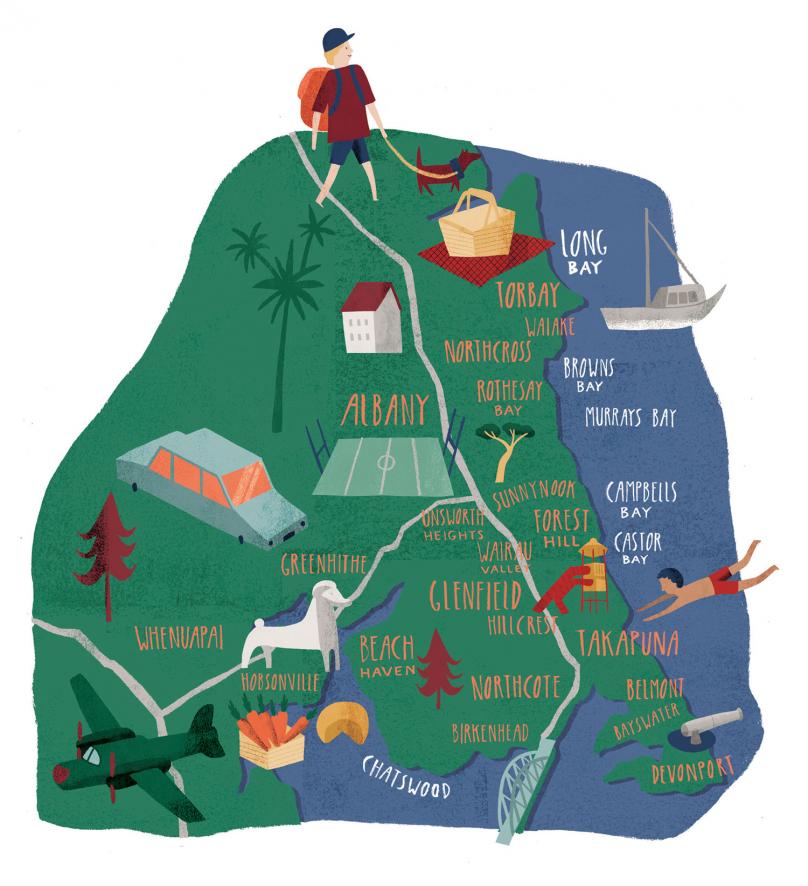 Before the bridge was opened in 1959, the Shore was a getaway rather than a dormitory. The townships of Devonport and Birkenhead were established in Victorian times, but the growth that filled the space in between and further north only really occurred once the motorway linked this backwater to the rest of the city. But even though the North Shore is well-settled, it still has its wild places: pockets of bush persist within the suburbs, and its string of safe beaches are never crowded.

With its string of Victorian shop frontages and street upon street of gorgeous timber villas, it’s easy to while away a day wandering around Devonport – or take a bike or Segway tour around its highlights.

Never getting tired of that beautiful city skyline! Captured by @logan_dodds #VisitAuckland

North Head or Maungauika, guarding the entrance to the Waitematā Harbour, was a significant defensive stronghold from the earliest days of European settlement. Fortified during the Russian invasion scare of the 1880s and into the early 1900s, by the time a real threat of invasion rolled around in the 1940s, it was too close to the city to be any use defending it. Its military heritage remains, however: take a torch to explore the tunnels and visit the Torpedo Bay Naval Museum at its base, then stroll along the golden strand of Cheltenham Beach.

Takapuna’s shopping centre tends to turn its back on its safe, beautiful, all-tide beach, but it’s just a short walk down the side-streets. The forward-thinking (but now amalgamated) Takapuna City Council deserves kudos for buying up a large section of beachfront land behind the shopping strip in the 1990s and turning it into parkland, where you can enjoy (multi)million-dollar views of Rangitoto from under a pōhutukawa tree for nix. There’s a cool new playground here, too – not for the faint-hearted, child or parent, but hugely popular, even on wet days. A string of new restaurants has cropped up beachside, offering sea views and breezes, but there are also plenty of places to eat, from casual to more fancy, in the main centre.

Before the bridge, the East Coast Bays were a bastion of holidaymakers, though most of the old baches have now fallen prey to the bulldozer or been stucco’d into something completely different. Artistic types were also attracted to the ‘other side’ of Auckland, with writer Frank Sargeson’s fibrolite bach in Esmonde Road – now a motorway feeder road – a hub of creative endeavour and camaraderie.

The old tongue-in-cheek question ‘Are you married, or do you live in Milford?’ gives an idea of the suburb’s somewhat louche reputation in the mid-twentieth century.

One of the best ways to explore the Shore is to walk along its eastern margin. The Takapuna to Milford walkway traverses black lava and passes some of Auckland’s most beautiful and expensive homes. Further north, you can walk along the shoreline between Campbells, Mairangi and Murrays Bays, and up over the cliffs to Rothesay and Browns Bays. At the northern end is the prosaically named Long Bay (funnily enough, named Oneroa by the Māori, also meaning long beach), one of the first and the most popular of Auckland’s regional parks. Picnic and stroll the beach, or hike or bike the coastal walkway up onto the cliffs to the north for more great views.

Sometimes it's worth getting up at 5.30🌞

The poster child for the new Auckland, Hobsonville was once an off-limits air force base and is now a bustling new community. New terraced and standalone housing is going up by the day, along with new schools, shopping centres and other facilities.

On weekends there’s a farmers’ market in the old seaplane hangar down by the wharf, with plenty of tastes to experience. There’s some cool public art dotted around the development, and a pretty coastal walkway takes walkers and bikers around the perimeter. The dangerous-sounding Bomb Point – the air force used to store its ammo down here – is definitely worth exploring on foot or bike, and is destined to become one of the city’s premier parks.

Loved by the locals: North Shore

North Head is the logical location for a picnic day out, which can also include lazing nearby on some of Auckland’s prettiest beaches and exploring Devonport’s boutique charm.  Read the story . . .