Say what you like about Auckland city and its residents, you’ve got to admit that both are blessed with the region’s beaches.

They’re within an hour’s drive of the kind of sand and surf action that others, less fortunate than themselves, would kill for.

Sure, there’s the pleasant, placid, white-sand beaches of the east coast, but for the genuine coastal connoisseur, the real action is out west.

If you time it right, and have the patience to find it, you could be rewarded with a glimpse of the Milky Way at Bethells Beach.  Shot by @iamcordz

From the secluded beach at Whatipu, north of the entrance to the Manukau Harbour, to Rangitira Beach at the southern entrance to the Kaipara, the west coast beaches are strung like black pearls.

The Waitakere Ranges were formed by volcanic activity over a period of 22 million years. The volcanic rock has weathered and washed to the sea, depositing a fine, purple-black sand rich in iron oxide. Feeling your feet sizzle in the superheated sand of Bethells Te Henga, Piha or Muriwai is one of Auckland’s quintessential summer experiences.

They may lack the conventional good looks of the white-sand beauties back east, but these are nonetheless movie star beaches. Moody Karekare starred in Jane Campion’s film, The Piano. Up the line, Bethells Te Henga served as a backdrop for Xena: Warrior Princess and Hercules: The Legendary Journeys.

In any weather, the solemn, cathedral-like coves of Bethells Te Henga, Piha and Karekare do atmosphere hugely well.

Even on a fine day, when an easterly has polished the swell into filthy, glassy barrels, there’s a sense of muscularity about the Tasman Sea’s attention to the rocky coastline, and an intimacy created by the dense rainforest that crowds the dunes.

Of course, when the weather cuts up rough, you can’t beat Piha or Muriwai for a show of raw, oceanic power. Swimmers, surfers and fishermen love and fear this coast in equal measure. 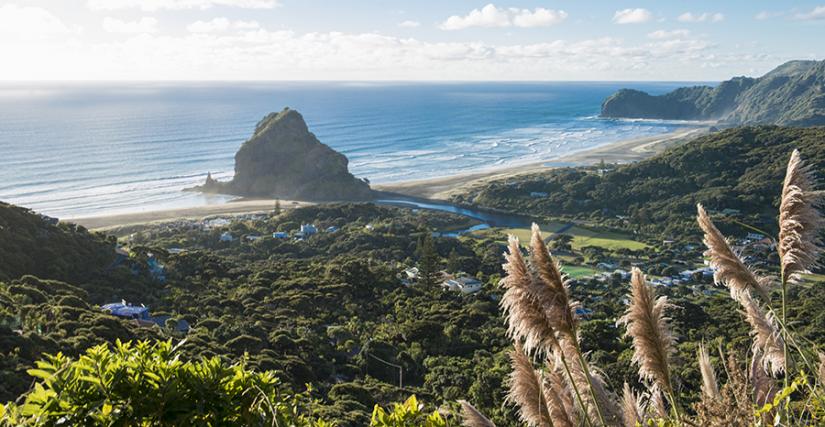 The 60km beach at Muriwai is a registered public road, and is a popular destination for weekend cowboys seeking sand and cred to stick to the fenders of their four-wheel-drives. It’s also a peerless place to gallop a hired horse. At its southern end, you can visit one of the North Island’s most accessible, mainland gannet colonies. Or you can just spread the rug out and savour the uniquely west coast taste sensation that is ironsand in your sandwiches.

It has the signature surf, the scorching iron sand, but some of the main highlights at Te Henga are the vantage points to be had from the clifftop walkway.  Read the story . . .

All-in-all there are over 60 sites of bygone volcanic activity scattered about the Auckland isthmus. Read the story . . .