If ever you should tire of the splendours of Dunedin – preposterous though that proposition may sound – there’s always the Otago Peninsula, extending from the city itself to the northeast, ending in the southern headland of the entrance to the harbour.

The coastline was an important source of kaimoana for local Māori and, for as long as Dunedin has been settled by Europeans, it has been something of a local playground.

As you’d expect, given Otago University maintains a marine research facility at Portobello, the marine life is prolific, with large colonies of New Zealand fur seals, the rare Hooker’s sea lion and populations of the equally rare yellow-eyed penguin scattered along the Peninsula’s shoreline.

The Department of Conservation has constructed a number of hides close to the penguins’ favoured landing points, and at the seaward extremity, Taiaroa Head, you’ll find the world’s only accessible mainland colony of Northern Royal Albatross.

The Royal Albatross Centre, with its well-designed observatory, gets you as close as is comfortable for both species to the birds. Watching them, whether they’re roosting, launching forth onto their 3.3-metre wingspan to scour the Southern Ocean for food, or returning to deliver the harvest of their long sojourn at sea to their young, you’ll be struck by one thing. They’re pretty damn big, these birds. Look one in the eye and you’ll never be mean to a red-billed seagull again.

The elevated spine of the Peninsula sports an architectural curiosity in Larnach’s Castle. Financier and politician, William James Mudie Larnarch, is not remembered for much these days, besides the extraordinary folly he commissioned in 1871. Forget the yuppies of the 1980s, we had conspicuous consumers a hundred years before and Larnach’s Castle is the ostentatious memorial of one of them. 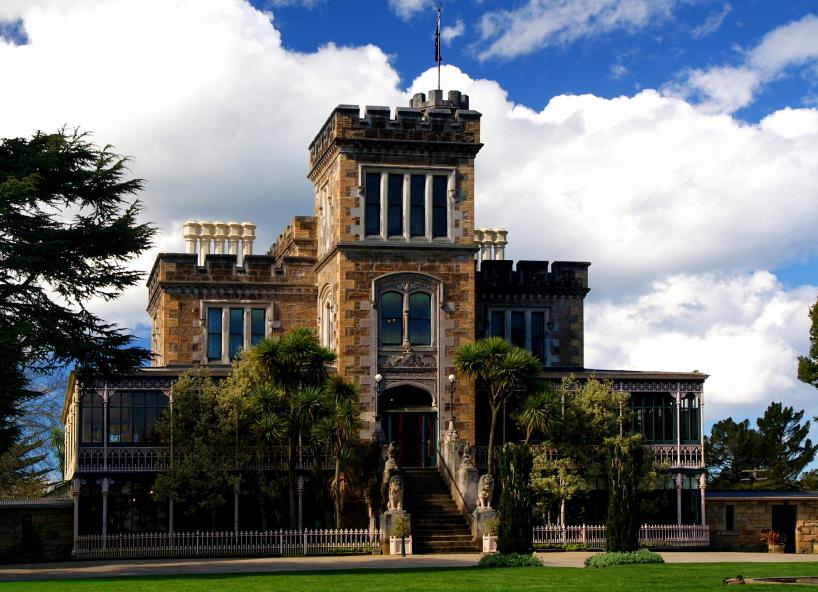 With its exciting, sometimes scandalous, sometimes tragic history and breathtaking views, Larnach Castle offers you a vision of the past and present. © Bernard Spragg Creative Commons

The Englishmen who drafted it to Larnach’s ‘English manorial’ specifications would have had difficulty believing that their already overblown design finished up as it did – as a Scots-style, stone edifice adorned with every frill of masonry and joinery that Larnach’s not inconsiderable budget could contrive. Larnach was fond of calling his residence ‘The Camp’, to commemorate the years he and his family spent camping in various of the building’s 43 rooms as tradesmen came and went and pottered about with the details.

Tasteful it is not, but fascinating and unfamiliar in this landscape, set as it is amid park-like gardens, it most certainly is.

Check out more of Otago...

Port Chalmers: a cradle made of sea

The clatter and clang of the container terminal, shags drying their wings on the transoms of fishing boats, glistening surf beaches and the lingering feel of the hundreds of years of history.  Read the story . . .

Otago Peninsula is the ruins of a gutted volcano, an eroded pudding of lava that cradles in its arms the glorious Otago Harbour. Read the story . . .

Loved by the locals: Otago Peninsula

Do what the locals do on the Otago Peninsula.  Read the story . . .

Dunedin City: Edinburgh of the south

Check out more of Otago...