Rakiura is New Zealand's most recently formed national park and exudes all the charm of a world on its own.

The sunrises and sunsets in soft southern light are amazing. Visitors can explore pristine beaches, sheltered inlets, and coastal forest, and see seals, penguins, kiwi, weka and many other birds. There are also opportunities for hunting, fishing, boating, cruises and scenic flights. 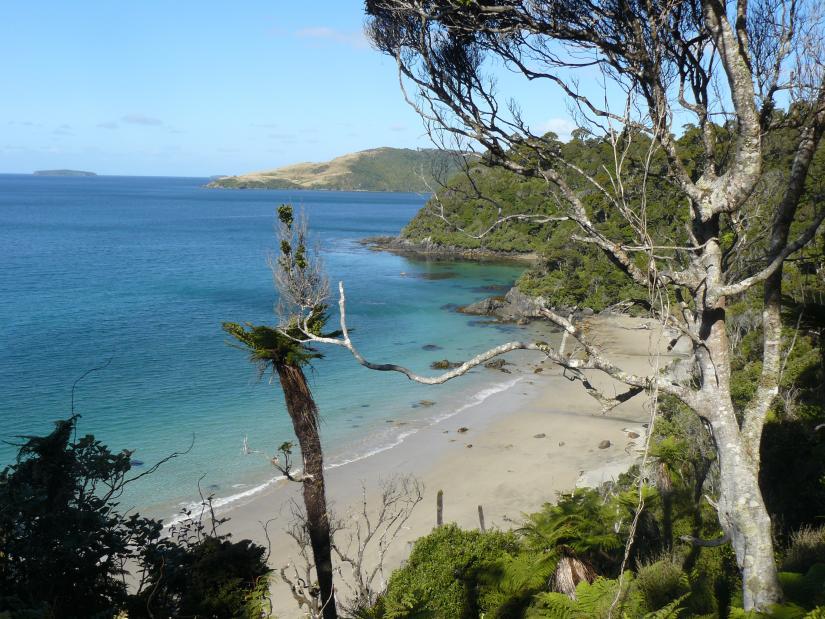 Rakiura is the Māori name for Stewart Island. It is translated as ‘the land of glowing skies’, due to the night-time displays of Aurora Australis, the Southern Lights, as well as the spectacular sunsets. The name may also refer to the story of Te Rakiura a Te Rakitamau – the deep blushing of Te Rakitamau. This Māori ancestor suffered the embarrassment of finding out the woman he sought to marry was already engaged – and blushed even deeper when he asked after the woman’s sister and heard she too was engaged.

The island is also known as Te Puka a te Waka a Māui, the anchor of Māui’s canoe, the South Island being the waka and the North Island the fish Māui raised from the deep. The chain-link sculpture at the entrance to the national park symbolises this anchor chain, and there is a matching sculpture on the mainland at Bluff. 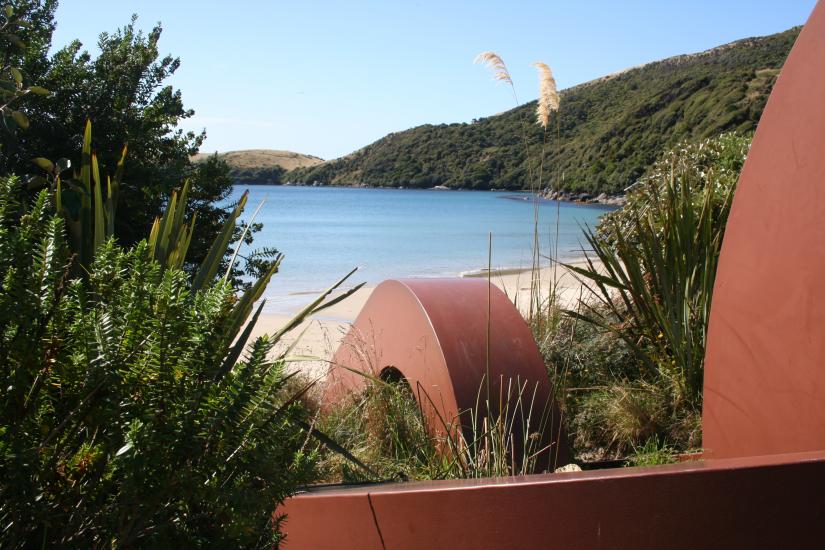 The chainlink sculpture at Lee Bay marks the start of the Rakiura Track. © DOC  Creative Commons

The island takes its more recent European name from William Stewart, an officer of the sealing vessel the Pegasus, who compiled the first detailed chart of the southern coast in the early 1800s.

Comprised of granite, the island has three main peaks, the highest being Mount Anglem Hananui (980 metres), in the north. On the western side, Mason Bay’s sprawling, soaring dunes form an impressive landform, and towards the centre are the expansive Freshwater wetlands.

The jagged skyline of the Ruggedy Mountains of the northwest corner contrasts with the smooth outline of Mount Anglem.

Stewart Island is remarkable for its almost complete cover of natural vegetation, from the sea to cloudy, windswept summits. Sea-pounded cliffs and sandy beaches make up the western coast of the island, while on the eastern side there are three sheltered inlets: Paterson Inlet, Port Adventure and Port Pegasus. 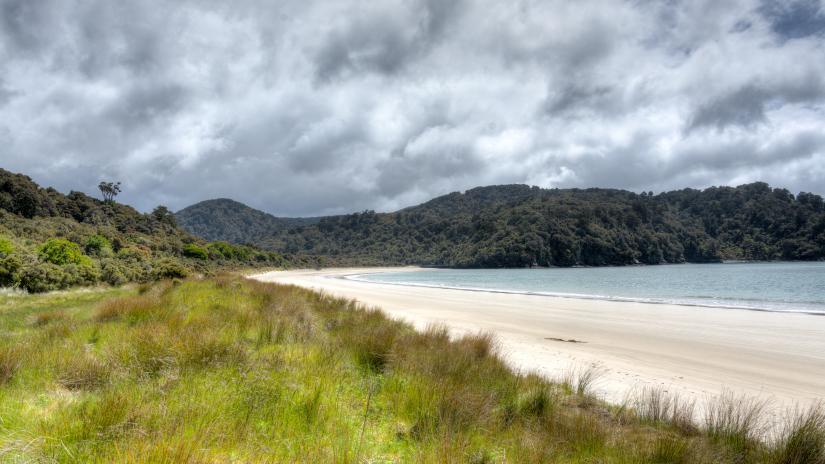 Archaeological evidence shows Māori have been visiting Stewart Island Rakiura on food-gathering expeditions since the thirteenth century, taking advantage of the rich sea and bird life. Today, the cultural harvest of muttonbird tītī on the nearby Tītī Islands is still important for many Rakiura Māori, and Stewart Island Rakiura is still of great importance to Ngāi Tahu Māori.

Crown agents purchased Stewart Island Rakiura from Rakiura Māori in 1864 for £6000. Gold and tin mining, sawmilling, boat building and fishing industries developed with the growing population, and by 1870 Halfmoon Bay was a small yet active township. Tourism began developing around this time, based around the island’s scenic values. Reserves were created to protect these values, beginning with Ulva Island in 1899 – one of the first reserves in New Zealand.

The livelihoods of the island’s 400 permanent residents are today based on cod fishing, paua and crayfish gathering, salmon and mussel farming and tourism. Today all residents live in Halfmoon Bay and other areas around Oban. Fishing, marine farming and tourism are the main industries of Stewart Island.

Rakiura is a paradise for hikers, with nearly ten times more kilometres of walking tracks than roads. All walks can be accessed from Oban, the principal settlement on the island. Transport to the island is either a 20-minute flight from Invercargill Airport or a one-hour trip on the ferry from Bluff. 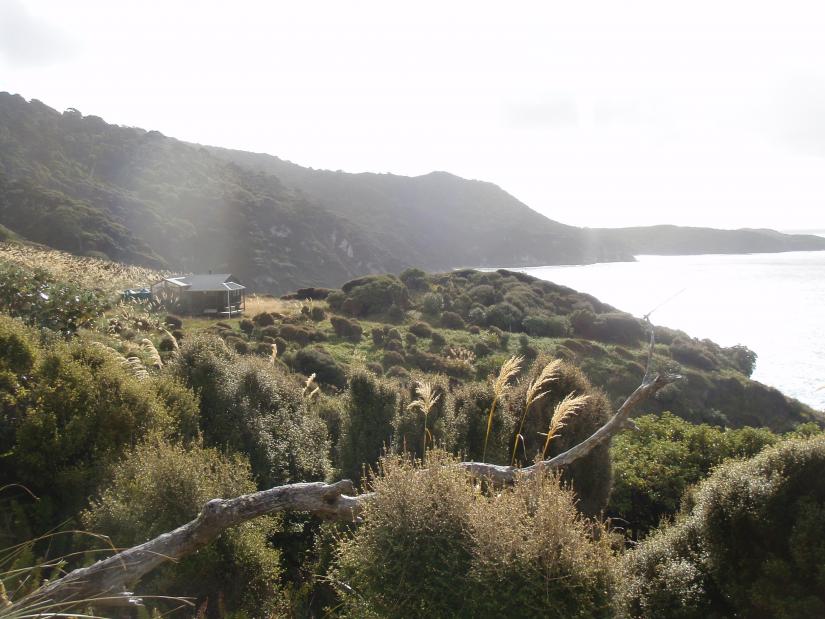 The Great Walk on the island is the Rakiura Track, a circuit that takes three days to complete. The North West Circuit, which takes nine to 11 days, offers a challenging multi-day exploration around Rakiura Stewart island’s northern coast. Sweeping beaches, rocky headlands and stunning scenery are the rewards for the fit and well-equipped. For daytrippers, there are plenty of shorter walks.

The sensational birdlife is a big draw-card for people visiting the island – at night you'll hear the calls of the ruru, weka and kiwi, and by day the song continues. Tūī, bellbirds, tomtits, fantails and many more can be heard.

Ulva Island is today a DOC sanctuary, a haven for kiwi and other rare bird species. Known now as southern tokoeka, the Stewart Island Rakiura kiwi behave rather differently to kiwi in other parts of New Zealand. They maintain family groups, for example, and some birds feed during daylight hours.

The Rakiura Track: beauty in isolation

Tucked away on New Zealand’s third island, Stewart Island Rakiura, the Rakiura Track is the perfect opportunity for an island adventure. Read the story . . .

Do what the locals do on Stewart Island Rakiura.  Read the story . . .

It feels like going back in time on Stewart Island, to a land with less human impact, as well as ancient forest, vociferous birdlife and abundant seafood. Read the story . . .

At Halfmoon Bay, the main settlement on Stewart Island, sunsets and sunrises stretch into smouldering pyrotechnic displays. Read the story . . .