It was a slate grey day in Bluff. Everything seemed devoid of colour: the sky, the sea, the land and most of the houses.

The town and its residents hunkered down in the lee of Motupōhue, or Bluff Hill, as a blustering south-westerly whipped across Foveaux Strait. Even the normally boisterous seagulls appeared rather subdued, crowding onto an old wooden wharf beside the ferry terminal and squabbling half-heartedly with each other.

The late afternoon ferry crossing was rather bumpy, as it so often tends to be. I sat outside near the stern of the twin-hulled vessel, hanging on and watching swells roll past and plumes of spray breaking over us. The South Island slowly receded beneath a layer of dark cloud while, ahead of us, everything but the low slung headlands of Stewart Island Rakiura remained hidden in the coming dusk.

When bad weather hits this part of New Zealand, it tends to have the volume turned up full. But that makes the clear, calm days all the more special.

For me, the next morning was such a day, with large flocks of noisy kākā chasing each other from tree to tree in the early morning sunlight and quite intense birdsong from tūī. I walked around the few streets of Oban, taking in the scenes and congratulating myself for finally making the decision to come here.

It has been said that Stewart Island residents tend to have an odd sense of humour and are keen to protect their low-key lifestyle. Perhaps only partially in jest, Stewart Islanders like to refer to their homeland as independent from the rest of New Zealand. It certainly feels like going back in time here, to a land with less human impact, as well as ancient forest, vociferous birdlife and abundant seafood.

Around 80% of Stewart Island Rakiura falls within Rakiura National Park. This is hilly country. And wet: it receives an annual rainfall between one and three metres. Bad weather comes any time of the year, but the flip side is the temperature often feels quite mild the rest of the time.

In Māori mythology, Stewart Island Rakiura, or Te Punga o Te Waka a Māui, was the anchor of Māui’s canoe (the South Island) as he hauled up the North Island. These days Rakiura is the more commonly used Māori name and translates as ‘glowing skies’, perhaps referring to the spectacular southern lights, the Aurora Australis, that can be seen here.

Most of the island’s income is from tourism, and DOC has done an admirable job focusing its limited funding on attractions that encourage visitors to stay a few days.

There is plenty to see and do, catering just as much to those hoping for adventure as to those keen to gently embrace the slower pace of life.

Most visitors focus their activities around the northern aspect of the island. Travelling to the largely untracked south coast is better left for the truly adventurous.

Stewart Island is a place that New Zealanders might wonder about, but very few actually visit. If you manage to luck it with the weather, you will be so glad you made the decision to go.

Save 20% off Torpedo7-branded gear as an AA Member 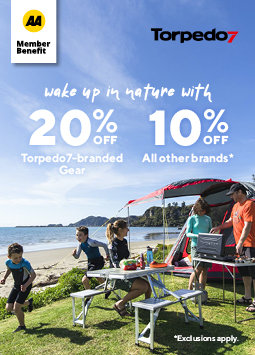 Do what the locals do on Stewart Island Rakiura.  Read the story . . .

Lying only 15 minutes off Paraparaumu by boat and only 90 minutes north of Wellington by road, Kāpiti Island is New Zealand’s most accessible offshore wildlife sanctuary. Read the story . . .

At Halfmoon Bay, the main settlement on Stewart Island, sunsets and sunrises stretch into smouldering pyrotechnic displays. Read the story . . .

Waiheke Island: a sense of freedom

Some people were terribly excited when Lonely Planet named Waiheke Island as the ﬁfth-best holiday destination in the world.  Read the story . . .

Save 20% off Torpedo7-branded gear as an AA Member