Te Urewera, the mountainous homeland of Ngāi Tūhoe, the Children of the Mist, spent 60 years as a national park – a brief period really, considering the place still holds evidence of its seabed origins millions of years earlier.

It was disestablished as a national park in 2014, as a result of the Ngāi Tūhoe Treaty of Waitangi settlement and is now administered by the Te Urewera Board, which comprises joint Tūhoe and Crown membership. Long story short, Te Urewera was given its own legislative act as part of the Crown’s settlement with Ngāi Tūhoe in acknowledgement of the very real and dense connection and history between the people and the place. Te Urewera is now actually a legal entity, with all the rights, powers, duties and liabilities of a legal person.

Te Urewera is an absolutely stunning landscape, overflowing with enough lakes, walks and ancient native forests to quench the nature-lust of any hiking addict or outdoor zealot.

But it is also a land so jam-packed with stories of romance, tragedy and heroism that it could easily fill six seasons of an antipodean version of Outlander.

Some of the stories from Te Urewera’s post-colonial history were laid out by the late Judith Binney in her last ever book Encircled Lands: Te Urewera 1820–1920. But none of that even touches the depth of the pre-colonial history, populated with more characters and intrigue than the entire catalogue of George R. R. Martin’s A Song of Ice and Fire (the book that inspired the TV series Game of Thrones).

A post shared by Mountain Safety Council (@mountainsafetycouncil) on Aug 4, 2018 at 1:55pm PDT

But if the comings and goings of the human animal don’t tickle your imagination, how about the roaming patterns of giant reptiles? The hunt is on for dinosaurs in Te Urewera. Ngāi Tūhoe, GNS Science and Victoria University are on a mission to uncover fossils there. Imagine you were to come across remains millions of years old when trekking through the forest? It’s not as crazy as it sounds – the late Joan Wiffen did just that when she found a toe bone from a theropod dinosaur, the smaller cousin to the infamous T. rex, in the Urewera Ranges.

Beauty in the mist

Of course, the main reason most people head for Te Urewera is the breathtaking scenery. It has a disarmingly untouched and isolated feel to it. Mix that with stunning, panoramic vistas and you will undoubtedly feel that primal communion with nature you probably didn’t even know you were craving.

The Lake Waikaremoana is central to one of NZ's Great Walks. This 3-day walk takes you through the spectacular native forest of Te Urewera National Park. Awesome forest shot by @samiijust 👍🏼

Even just driving through the middle of Te Urewera between Murupara and Wairoa gives you that sense. It takes a long time and it’s slow going. If you are unused to isolated areas, then there will be moments when you will think to yourself ‘Ummm.... did I take a wrong turn? This doesn’t feel like a road I should be driving on...’ Your heart-rate will inevitably elevate as your instinct to grab your phone takes over. Of course, you know it before you see it... but you have to check: no coverage.

My only advice is this: you didn’t take a wrong turn; there’s pretty much only one road in and out. Take a deep breath, turn off your phone (you’re only wasting the battery), sit back and enjoy the ride. This is why you came. That feeling of being really small and young while the thing surrounding you is really big and old. Accept the new perspective this offers.

Part of the beauty of Te Urewera is that it really doesn’t care who you are or what you do for a living. It doesn’t care if you are or aren’t Tūhoe, and it certainly doesn’t care about your stress. It just is. And there’s the magic: that something so beautiful and amazing can be that way without even trying.

Then there’s Lake Waikaremoana, which you will not be able to avoid, thankfully. It is a body of water that I could use more adjectives to describe but really, it’s best if you just go there. The first time you see it, though? If you’re approaching from the Murupara side it will take your breath away. Here’s a tip: try not to be the one driving.

The thing with Te Urewera is it’s big. There is a lot to see and do. You will probably have to go more than once. Who knows, you may become one of those people, of which there are many, who go back annually.

It is also a place that can be as dangerous as it is beautiful. The Department of Conservation website has all the information on activities open to the public as well as important alerts and safety tips. Make sure you are well informed and well prepared.

But really, it’s worth it. It is a true taonga in every sense of the word and it's here for all of us to experience. All you have to do is decide to go. The custodians of Te Urewera, Ngāi Tūhoe, welcome you to share in its majesty. Nau mai, kuhu mai. 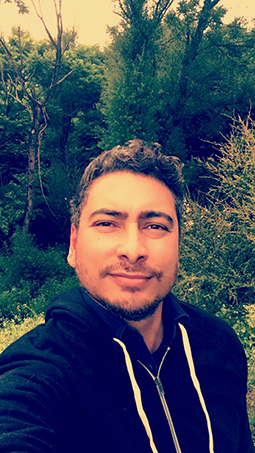 Toi is Tūhoe and loves the lifestyle that living at home in the Eastern Bay of Plenty offers. He has worked in radio and television over the last two decades as a producer and presenter but has diversified recently by opening a barbershop in Tāneatua, the gateway to Te Urewera.

The dense, luxuriant rainforest forms a handsome setting for the gem that is Waikaremoana, ‘the lake of rippling waters.' Read the story . . .

The Lake Waikaremoana Track, in the remote Te Urewera region southeast of Rotorua, traces the shoreline of this spectacular lake, named by Māori the ‘sea of rippling waters.' Read the story . . .

Toi is Tūhoe and loves the lifestyle that living at home in the Eastern Bay of Plenty offers. He has worked in radio and television over the last two decades as a producer and presenter but has diversified recently by opening a barbershop in Tāneatua, the gateway to Te Urewera.