Queenstown: aboard the TSS Earnslaw

Lake Wakatipu was once home to a number of steam-driven watercraft, in the days before road-building in the Lakes District really got underway.

With the discovery of gold in the area, people suddenly acquired a powerful urge to get about, and steamers were the transport mode of choice, plying the lake from the main port of Kingston on the Lake’s southernmost extremity.

Once the goldrushes waned, the workaday business of supplying the farms of the district kept the Wakatipu steam flotilla in business. By the beginning of the twentieth century, the new goldrush – tourism – was getting underway, the volume of visitors to Lake Wakatipu matched only by the volume of complaints about the standard of the accommodation on the cramped, crummy, stinky boats. 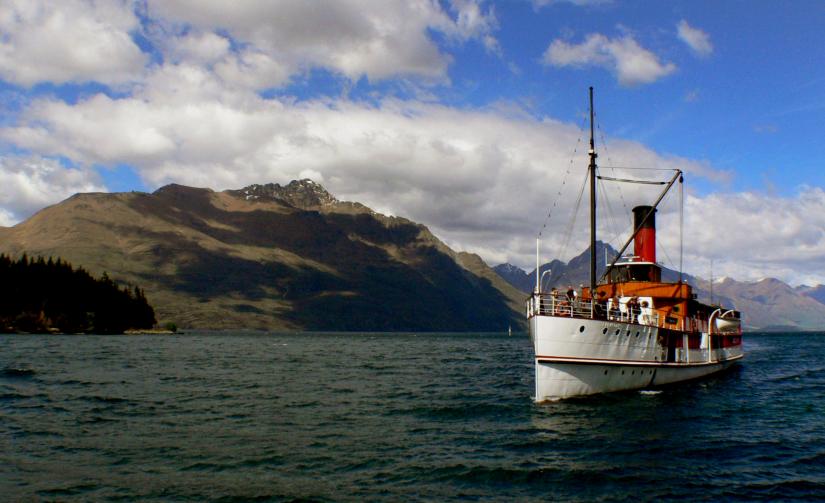 The government decided it was time a better class of steamer was laid on. It commissioned the vessel that was to become the Earnslaw from Railways Department architect, Hugh McRae, and after a bit of a tussle over whether she ought to be a paddle or screw steamer, the job was handed over to Dunedin shipwrights, John McGregor and Co, who had built similar vessels for the ferry service on Otago Harbour.

Once she had been put together on the Otago foreshore – a plaque commemorates the spot – the Earnslaw was disassembled and freighted kitset-fashion to Kingston, where she was put together again. The hull and decks were launched in February 1912, and her maiden voyage took place eight months later, on 18 October.

The Earnslaw has plied the mirror-glass waters of Wakatipu ever since; her graceful, low-slung lines and plume of coal smoke as much part of the scenery as the Remarkables.

The Earnslaw was a working girl in her early days, too, capable of carrying a mixed complement of cargo and passengers. In those days, tourists might sip their gins and tonics in the saloon, while up to 1,500 sheep stomped the deck below nervously on their way to some station on Wakatipu’s distant shore.

Not anymore. You can use her as transport to Walter Peak and observe the working of a high country sheep station, although the people have the pretty vessel all to themselves these days. The Earnslaw sails all year round and in all weathers, and there is no better way of seeing the Lake than from her decks.

She’s over 100 years old and looks as good as the day she was launched. The pure lake waters and clean alpine air have treated Queenstown’s ‘Lady of the Lake’ very well.

Loved by the locals: Southern Lakes

Do what the locals do in the Southern Lakes. Read the story . . .

Southern Lakes: a place for all seasons

In the constellation of New Zealand’s star attractions, the Southern Lakes region burns so bright that, if it were up in the sky, it would be visible in full daylight. Read the story . . .

Queenstown to Glenorchy Road: a drive to Paradise

Enjoy forty-five minutes of emerald lake water and bush-clad hills, against a backdrop of snow-touched mountains as you drive from bustling Queenstown to picturesque Glenorchy – via Paradise.  Read the story . . .