Five great days out with kids in Nelson

From go-karts and hydroslides to the world's longest flying fox; cycling adventures, animal encounters and some of New Zealand's best beaches – you'll be spoilt for choice when it comes to family-friendly activities in the Nelson region.

Abel Tasman may be the smallest of the country’s national parks, but it has a weighty reputation for its beautiful beaches and stunning Coastal Track. Thanks to the boats that service this stretch of coast there really is something for everyone – whether you and the family prefer the comfort of a sleek catamaran cruise, or to test your legs on the well-trodden path.

Wilsons offer day tramps of various lengths and run special family deals to make exploring the park more economical. Their boats and a number of other operators depart from Kaiteriteri, where the sands draw loyal crowds each summer, as does its popular playground and flying fox. The river here provides good paddling, but watch for the undertow. A trip around the rocks at low tide to Little Kaiteriteri leads to a quieter beach, with a short trek back across the hill making the perfect loop.

Make the first trail of footprints on the beach #nelsonshines 📷: @sharlenelaskey

The waves of the wild West Coast and impressive limestone arches will have you reaching for your camera at stunning Wharariki Beach. The trek over farmland and dramatic dunes is also often rewarded by the sight of seals – sometimes with pups – at the rock pools. Prepare for a blasting though, as the wind whips loose sand across the beach. For experienced riders, Cape Farewell Horse Treks offers thrilling experiences here.

More sand adventures are to be had on Farewell Spit, or Onetahua, where you can bodysurf down the 25-metre crescent-shaped barchan dunes. This is New Zealand’s longest sand spit, an internationally-renowned sanctuary and designated nature reserve that draws over 100 species of birds. Public access is limited – beyond the four-kilometre mark, the only way to explore is aboard the Farewell Spit Tours four-wheel-drive bus to the gannet colony and remote lighthouse, a trip well worth making.

3. A trip to Tāhunanui and its attractions

Nelson’s Tāhunanui is the perfect place for family fun, with its kilometre-long golden sandy beach. Paddleboarding is big here and you could fit the whole crew on board if you hire the Big Tahuna which has been known to accommodate well over 20 people. The expansive beachside Lion’s Playground with its rocket slide and the smaller activities area near the Beach Café provide all the thrills, as does the adrenaline rush of going airborne on the Megaslide or whizzing down the Hydroslide clinging to the foam mat.

During the weekends and holidays the indoor roller-skating rink is a hit for all ages, and if your cheeky monkeys would like some competition, at Natureland they can catch up with capuchins, lemurs, pygmy marmosets, native birds and heritage breeds.

Still more energy to burn off? Try a cat-and-mouse game of Lasertag in the bushes, a session on the ProBounce trampolines, or a game of Footpool. For petrol heads, Prokarts go-kart racing offers options for big kids and small or if a collision course is more your thing, try a session on the bumper boats. For a more sedate family bonding activity, get into the swing of some crazy golf.

Nelson is blessed with an abundance of producers of fine-tasting wares, from delectable wines, craft beers, berries, and apples, to gourmet-style potato crisps, artisanal chocolate and world-famous peanut butter.

The Great Taste Trail – a 174-kilometre cycle route – takes in a number of great options to sample the region’s fare and is easily tackled in sections.

If you don’t have your own wheels, hire bicycles from The Gentle Cycling Company or Nelson Kiwi Journeys which also offers private relocation transport for those with their bikes.

A great start is at peaceful waterfront village Māpua, with its waterfront restaurants and where Hamish’s Ice Creams have long been popular, as has the Smokehouse’s fish and chips. More recently these have been joined by the Golden Bear Brewery, and a number of other tempting cafés.

From here, take the ferry across to Rabbit Island, with its forests and golden sand beaches, following the path to Richmond, where there is access on the southern route to a number of vineyards and berry growers, or take the northern route towards Nelson, stopping off at the new premises of Pic’s Peanut Butter World – a Willy Wonka-Style factory where free tours are popular and kids can make their own spread.

Today is a rather special day in the world of peanut butter - it's the FIRST day that Pic's Peanut Butter World will be officially open for factory tours to the public! ⁣ ⁣ Would you like to come along and join us? Just book yourself in on our website. We run 3 tours per day, Monday till Friday and they're FREE! We look forward to meeting you⁣ ⁣ #NelsonTasman #picspeanutbutterworld #FREE #factorytours #sunnynelson

One of Nelson’s best-kept secrets is that it’s home to the world’s largest flying fox – the 1.6-kilometre-long Skywire.

To take a thrilling ride on this magnificent feat of engineering, whizzing above the tops of untouched native forest at speeds of up to 100km/h, head out to Cable Bay Adventure Park 15 minutes north of Nelson city.

Horse treks are popular here, too, as is quad biking. Challenge the family to a paintball fight or an archery lesson. The newest addition to this long-standing attraction is its Grade 5 downhill mountain bike trail and shuttle service. You can also hire bikes here, including e-bikes.

Afterwards head to Cable Bay itself – location of New Zealand’s first telecommunications link with the rest of the world - where the beach near Pepin Island is a great family swimming spot at low tide, with rock pools to explore. Climb the hill near the campsite and café for a fabulous view.

Kids will never remember their best day of television, but what they will remember are days like these, exploring nature and the stunning natural landscapes that surround us. Regram from @awolfamily #extraordinary #nelsontasman #southislandnz #cablebay #lovetheoutdoors #newzealand #gottalovenz #nzmustdo #purenewzealand #newzealandvacations #travelnewzealand 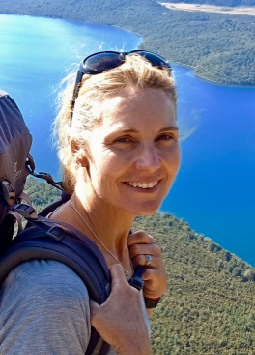 Nelson-based writer, Fiona Terry has spent the last 25 years crafting stories from around the world, but most recently in New Zealand. Her journeys were initially with toddlers, but these days, much more grown-up offspring. Choosing a photographer for a husband was a shrewd move, and now the kids are old enough to carry their own gear, travelling just gets easier.

Ride one of the world’s longest flying foxes in Nelson

The Skywire at Cable Bay Adventure Park is a thrilling 300-metre-high, 1.6km return trip that sees you shoot across the treetops at up to 100 km/h.  Read the story . . .

The Brook Waimārama Sanctuary on the outskirts of Nelson City is the largest fenced preserve for endangered wildlife in the South Island.  Read the story . . .

Nelson has it all: a vibrant centre, fabulous music scene, incredible outdoor opportunities, arts and crafts, culture and stellar marks for sunshine hours.  Read the story . . .

Nelson-based writer, Fiona Terry has spent the last 25 years crafting stories from around the world, but most recently in New Zealand. Her journeys were initially with toddlers, but these days, much more grown-up offspring. Choosing a photographer for a husband was a shrewd move, and now the kids are old enough to carry their own gear, travelling just gets easier.